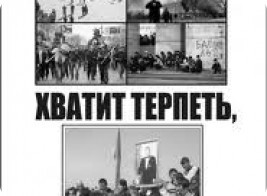 Nursultan Nazarbayev, who has been immutably governing Kazakhstan since 1989, initially as the head of the communist party and then as the president of the republic, intends to imprison Igor Vinyavskiy, Editor-in-Chief of the ‘Vzglyad’ newspaper, for seven years.

Igor Vinyavskiy is charged with calling for forcible seizure of power and coercive change of the constitutional system of Kazakhstan. He is accused on the basis of the allegations that in April 2010, as editor-in-chief of the Kazahkstan newspaper ‘Vzglyad’ he participated in the dissemination of the leaflet (attached herewith).

The very fact that the criminal case against our colleague was initiated by the workers of the National Security Committee after two years, in January 2012, is evidence of the political nature of the criminal prosecution of Igor Vinyavskiy.

Moreover, after the journalists of the Kazakhstan newspaper ‘Golos Respubliki’ conducted a press-conference in Almaty in support of Igor Vinyavskiy, they were also charged with dissemination of this leaflet. Then, a printer on which press releases and copies of the leaflet were printed as well as the computer from which they were sent for printing, were confiscated from the office of the editorial staff of this newspaper.

We address you with a request to save our colleague, Igor Vinyavskiy from the military revenge apparently summoned by the Kazakhstan dictator.

Very little is required – please reproduce this leaflet and let it be known that as a result of this communication, the editor in chief and the journalists of Kazakhstan may be incarcerated for seven years or otherwise, convey this story to your readers so that the power of vox populi may overcome the unrelenting oppression in the distant Asian country which is located between Russia and China, and which is now at the mercy of the self-proclaimed pontificator of democracy and progress.

The translation of text:

Kirgistan got rid of the thevish family of the Bakaevs

Let’s get rid of him, too! (literary translation: Let’s take him to the dump!)