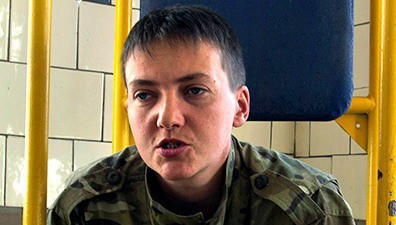 Savchenko locked in an insane asylum prior to the appellate hearing?

Ukranian pilot, Nadiya Savchenko has been transferred from the detention facility in Voronezh, Russia to the Moscow detention centre for women ‘SIZO-6 Pechatniki’. Ahearing in which the court will consider the appeal of the defence, who did not agree to the forced psychiatric examination of their client, is to be held tomorrow.

The news that Savchenko had left the detention facility, was announced by Nikolai Polozov, one of the lieutenant’s counsels. Yesterday, when he intended to meet with his client, he learned that this wouldn’t be possible, as on 22 September she had been transferred to another location. Still, the Russian authorities had not informed her defenders of this fact. It wasn’t until this afternoon that the counsels managed to establish through their own channels Savchenko’s current whereabouts.

According to attorney Mark Feygin, who belongs to a group of defenders of the Ukrainian citizen, Savchenko’s transfer to Moscow is the next step in carrying out the appalling ‘psychiatric observation’, which is a practice undertaken in repressive psychiatry, with its roots in the USSR.

The Open Dialog Foundation has informed the Ukrainian Ombudsman’s office and the Ministry of Foreign Affairs of this fact.

In accordance with the court’s decision, the ‘psychiatric observation’ will last 30 days and during this time no one from her defence team nor representatives of the Ukrainian authorities will be allowed contact with her.