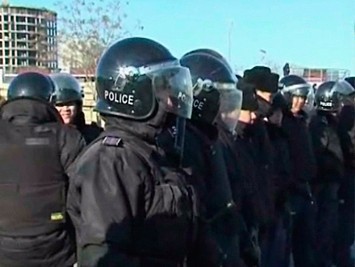 Yuri Vinkov, a Russian human rights activist who is a representative of the ‘Zhanartu’ labour union in the Russian Federation and a labour inspector in the ‘Zhashita Truda’ (‘Labour Protection’) Association of Labour Unions, published scanned documents: a guarantee of the former akim of the city of Zhanaozen Orak Sarbopeev (on the 9th of February, 2012 Serikbai Trumov was appointed to take his position) and a list of the injured people, admitted to the Zhanaozen hospital through the ED. On the list, names of minors aged 13 to 17 years are marked with a tick. The list was published in the online newspaper Forum.msk.

The content of these documents prove that the authorities of the city were warned about potential provocations, deliberately chose not to act in a way which would avoid them. It also indicates that during the unrest in Zhanaozen police used force against minors, and that the number of injured persons which were registered officially does not reflect the true figure.

According to the text of the guarantee, in case if damage is caused to the yurts rented for the holiday season, Orak Sarbopeev agrees to pay to each owner of the yurt the amount of 2 million tenge (approx. 10,360 euros), while the real value of a yurt, according to Vinkov, is 765-1275 euros (approximate exchange rate of 1000 tenge is 5.18 euros). As reported by the strikers, their delegation warned the authorities of potential provocations and asked to remove the yurts from the square to the adjacent park. Orak Sarbopeev received a collective written statement in which he was warned about the responsibility that he is going to bear. The authors of the statement wrote that they knew of the impending provocations against the striking oil workers, and declared that in order to avoid such provocations the group of strikers was going to be removed from the square during the night and for the duration of the 15th and 16th of December. The guarantees with the indicated amount of compensation in the event if unforeseen circumstances occurred, were handed to the owners of yurts as a guarantee by the authorities after the strikers convinced the latter not to put up the yurts or the stage on the square in order to avoid provocations.

In another document, drawn up by the Zhanaozen City Hospital, names of 17 minors aged 13 to 17 are marked with a tick. In this context, the author quoted the words of Tamara Ergazieva, who reported the direct participation of Amankeldi Aitkulov, the First Deputy of the Akim of the Mangistau Province, and Kiykbay Eshmanov, the General Director of the  ‘OzenMunayGaz’ Production Branch, in involving persons under age (mostly children of the local orphanage) in the unrest.

The ‘Open Dialog’ Foundation hereby expresses its concern over the fact that in Kazakhstan planned operations have been carried out against the journalists who were engaged in independent coverage of events in Zhanaozen on the 16th of December, 2011, and it urges human rights organisations and non-governmental associations to conduct an independent investigation and examination of the data contained in the published documents in order to bring to light all the circumstances surrounding the tragedy, and to prevent a bias interpretation of the events by officials in Kazakhstan.

The inscription on the scanned copy of the guarantee: Guarantee. I, the akim of the city of Zhanaozen, Orak Kuangaliuly Sarbopeev hereby guarantee full compensation for the damage, should such damage be caused to the yurts set on the Independence Square between the 15th and the 16th of December, 2011.  At the same time, we ensure the protection of the yurts by the forces of the Department of Interior. The inscription written in hand: the price: 2 million tenge.