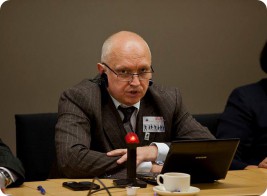 On the 3rd of October 2011, upon the initiative of the MEP Paul Murphy, The Confederal Group of the European United Left – Nordic Green Left, thematic hearings were held in the European Parliament. The sessions entitled Central Asia – EU: human rights dialogue results were carried out by The Open Dialog Foundation and The Association for Human Rights in Central Asia.

MEP Paul Murphy opened the meeting with his report on his recent visit to Kazakhstan and his impressions of the country. He shared his experience of meeting the striking oil workers of the Mangistau district, he also told the participants about the reaction of the government to his support to the oil workers’ cause. Apparently, the reaction was not very positive, since the government is trying to diminish the significance of the strike of thousands of oil workers. The events taking place in Kazakhstan are of great importance – they can show the power of the working class people. They can prove that these people, when they are organised, are able to challenge such an extremely powerful repressive regime as the Kazakhstan government. Mr. Murphy noted that the strike of oil workers is a very crucial reference point because it gives people confidence that they can fight and show resistance if they join their efforts. He  informed the participants that after his trip around the country together with the workers and labour union activists from around Europe and the world, a solidarity campaign was launched and a solidarity fund was established to enable the families of the Kazakh workers to feed their children and continue their actions.

Mukhtar Umbetov described the situation of violent suppression of oil workers’ peaceful demonstrations that took place in the Mangistau district. He noted that the situation with the strikes of oil workers has now become more than just a labour conflict and it grew to the level of not only the national, but also the international issue. Mr. Mukhtar Umbetov  described the evolution of the strike and the situation with repressions and layoffs carried out by the employers – the OzenMunayGaz and the KarazhanbasMunay company. The government refused to register independent oil workers’ labour unions, and by this act they breached the obligations stipulated in the legislation.

One of the representatives of the striking oil workers, Talgat Saktaganov explained the situation of oil workers’ families that have no financial resources to send their children to school in autumn, since they were denied their monthly salaries. Talgat told the participants about the murders that occurred in Mangistau in connection with the strikes, in particular, about the brutal rape of Zhansaule Karabalaeva, an 18 year-old daughter of an oilman, and about Zhaksylyk Turbaev, a 28-year-old oil industry worker-borer in the enterprise “MunayFieldService” and a labour union activist, who was killed at his workplace. He also mentioned his personal participation in the protest movement: “Our strike began in 2008. I’ve been dismissed from work for the third time… When anyone of us loses his job, his family loses the only breadwinner. We had 17 demands which we presented to the employer. We have never received any answers to our demands and no one has carried out negotiations with us. In order to draw attention to the situation, we went on a hunger strike that lasted 42 days …. “

According to T. Saktaganov, working conditions of oil workers are unacceptable: they are not provided with a working environment that they are supposed to have according to the legislative norms of Kazakhstan, the workers are even forced to buy their own tools for work. “Our whole labour union in the company is corrupted and represents the interests of the employer. Authorities are using violence against us. We work in poor sanitary conditions. There is a high mortality rate among young children. We demand to establish independent labour unions, to release our lawyer N. Sokolova from prison and to re-employ the workers who were laid off in connection with the strike.”

Vladimir Kozlov, a representative of the people’s opposition party “Alga!” (which is part of the People’s Front), continued the subject of the problems of oil workers,: “Up till now, two thousand people have been dismissed. Labour union members and their families were murdered. In this conflict, the authorities immediately took the employer’s side. The government supported the employer and resorted to all available tools and means of coercion, including administrative and criminal proceedings, decisions of the courts and illegal practice of exerting mental and physical pressure on the strikers. Public authorities missed the opportunity to become an arbitrator in a dispute between the workers and the enterprises, and a social conflict turned into a political one”. Kozlov is of opinion  that his main postulate is the necessity to start negotiations with the strikers, to release the labour union lawyer, Natalia Sokolova, who was sentenced to six years of imprisonment. As an opposition force, they stand on the side of the workers and demand fair negotiation.

Amangeldy Lukmanov, a representative of the laid-off workers of the Ersai Caspian Contractor,  confirmed the words of his colleague: “We have tried to resolve the conflict peacefully and have sent our statements to the authorities. No one has ever answered. The employer responded by way of political repression. In our company we were discriminated on the basis of our citizenship – our salaries were lower than those of foreign employees who worked in the same position.”

Tanya Niemier stressed the courage of oil workers who have continued their strike for the last four months, despite the repressions and the risk that their families might not have food, regardless the fact that they are receiving threats that their houses will be burned down, they will be killed and their families will be attacked. She noted that people around the country are closely looking at the events in Mangistau and the problems that those workers have are similar to the problems of workers in all the other regions of the country. She also stated that people are losing their fear of the political regime and they want to protect their rights.

Zhanbolat Mamay said that even though the strike of oil workers in Kazakhstan had started as a labour conflict, the workers now understand that the fact that the government ignored their problems and brought repressions upon them proves that the conflict has become a political issue and unless the country undergoes regime change, the problem will not be solved.

The second part of the discussion was opened by Nadejda Atayeva who reported on the situation with child labour in the cotton fields in Uzbekistan. The issue was brought up in connection with the discussion in the European Parliament on the trade agreement between EU and Uzbekistan. A series of pictures were presented as a proof that children are being taken away from school, brought to the cotton fields and forced to work there for two months in most terrible unsanitary conditions, even in the zones of ecological disasters. Ms. Atayeva has stressed that carrying out an independent monitoring of the situation in Uzbekistan by the International Labour Organization is of great importance, since the country has joined many international agreements regarding exploitation of labor.

Paul Murphy closed the meeting by summing up that there are two international communities – one of them is the elite and the business circles who want to make trade agreements and get access to cheap goods from these countries. They are represented by political parties and the European Commission. There is also the other international community: the community which is trying to defend human rights in the region and is acting in solidarity with the people from these countries. The Vice-President of The Open Dialog Foundation thanked all the participants of the meeting and stressed the need for joining efforts and the importance of expansion of the international community for which human rights have the priority over natural resources.