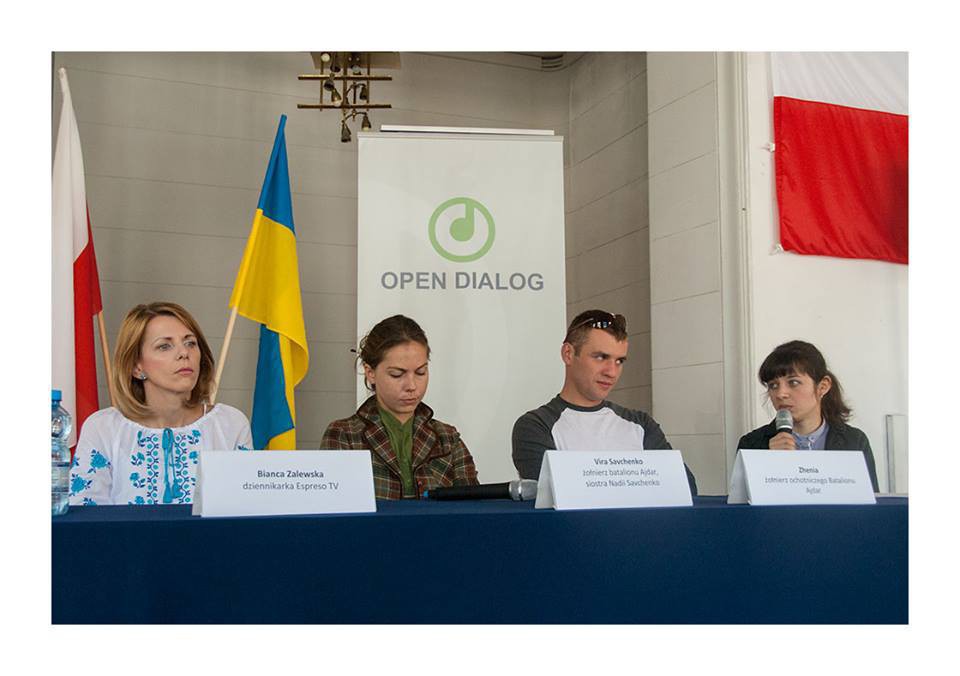 Sister of N. Savchenko in Poland

Following her receipt of an invitation from the Open Dialog Foundation Vira Savchenko visited Warsaw – the sister of the lieutenant of the Ukrainian Army, Nadiya Savchenko, who is currently being detained in a Russian prison, has been staying in Warsaw. The aim of her visit was, amongst other things, to familiarise representatives of non-governmental organisations, journalists, as well as Polish MPs with Nadyia’s situation and prompt actions which could help to bring about the release of the Ukrainian lieutenant.

On Tuesday, in the Ukrainian World, Vira Savchenko took part in a meeting with representatives of Amnesty International Poland, the Helsinki Human Rights Foundation and the Civil Committee of Solidarity with Ukraine. During the meeting, actions to be taken in defence of Nadiya were discussed.

On the following day, the sister of the captive pilot participated in a press conference also attended by a soldier of the “Aidar” voluntary battalion – Zhenia, and Bianca Zalewska – a journalist and a war correspondent  of the espreso.tv. channel. Later that day, Vira Savchenko, attended a meeting with representatives of the Polish-Ukrainian Parliamentary Group of the Polish Seym. The discussions focused on Nadiya’s situation and the situations other prisoners of war and observation missions organised by the Open Dialog Foundation. More importantly, the Parliament’s members declared their willingness to help through, inter alia, preparation of a position concerning Nadiya by the presidium , which will subsequently be communicated to all parliamentary groups for cooperation with Ukraine of EU Member States, Ministries of Foreign Affairs and the Parliaments of Ukraine and of the Russian Federation. The meeting was also joined by MPs, Maria Zuba, Małgorzata Gosiewska, Marcin Święcicki, Andrzej Lewandowski, and representatives of the ODF Aleksandra Gajewska and Natalia Panchenko.