Martin Schulz, President of the European Parliament, replied to the letter sent by the ODF concerning the case of Oleg Sentsov and other Crimean activists abducted and taken to Moscow by FSB officers and charged with terrorist activities. 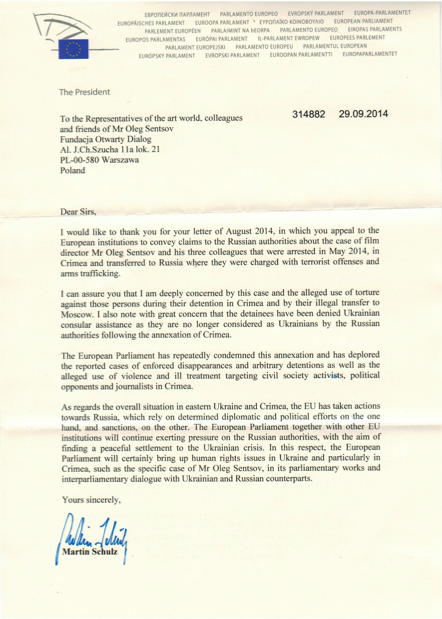 Schulz expressed his concern and outrage over the actions of the Russian Federation, which included torture used against those detained and a refusal to grant them access to representatives of the Ukrainian consulate, having forced them to adopt Russian citizenship after the annexation of Crimea.

As Schulz pointed out, the European Parliament has, on several occasions, condemned the annexation, unlawful arrests and the use of violence against political opponents of the Russian authorities. The EU has responded with political and diplomatic measures, and imposed sanctions on the Russian Federation. The President of the European Parliament also stated that the EU and its institutions would not cease their exertion of pressure on the Russian authorities.

The Foundation has long been following the case of Sentsov and other persecuted Ukrainian activists, urging authorities and human rights activists to take necessary actions.

We hope that the measures undertaken by the President of the European Parliament will not stop at his expression of concern and outrage but will take the form of concrete actions.