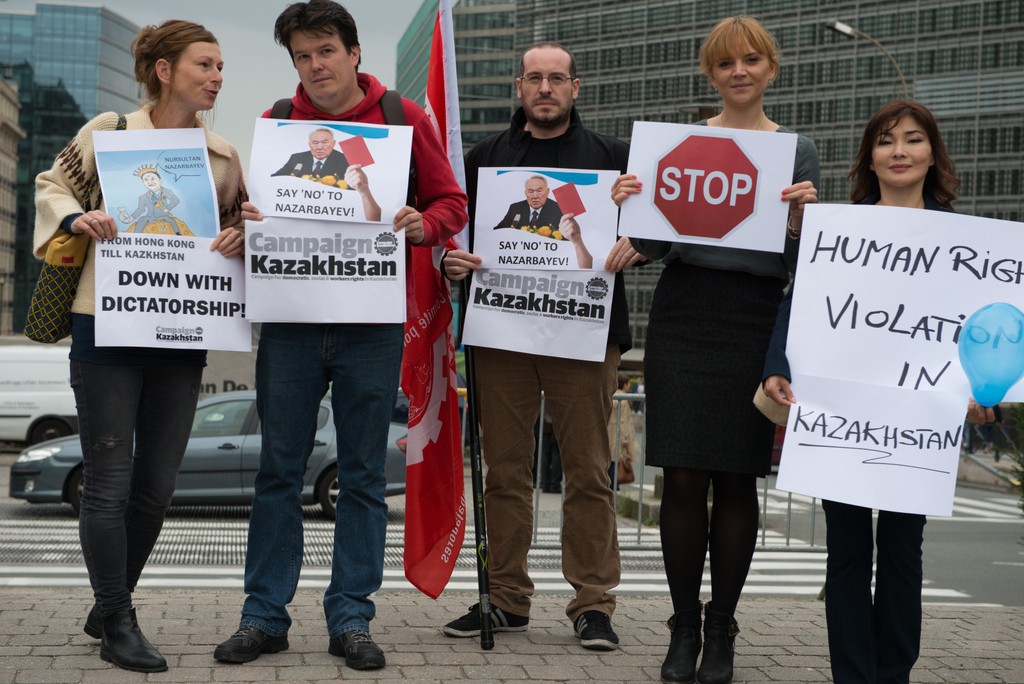 The manifestation against human rights violations in Kazakhstan, on the occasion of the visit of the Kazakh President Nazarbayev in Brussels

On 9 October 2014 in Brussels, the Open Dialog Foundation organized a protest against human and civil rights violations in Kazakhstan. On that day the Kazakh President Nursultan Nazarbayev visited Brussels upon the conclusion of the negotiations of the new enhanced Partnership and Cooperation Agreement (PCA) between the European Union and Kazakhstan.

The event, which took place between the headquarters of the European Commission and the European External Action Service, gathered a group of human rights activists and supporters, which drew attention to the numerous human rights abuses happening under the rules of the Kazakh dictator. Nursultan Nazarbayev has been ruling the country for over 25 years, now.

The special guest of the manifestation was Mrs Alma Shalabayeva, wife of the persecuted political oppositionist Mr Mukhtar Ablyazov, who is currently in detention in France, awaiting decision on his possible extradition to Russia or Ukraine, although those responsible for his persecution are actually the authorities of Kazakhstan.

The Kazakh President, Nursultan Nazarbayev, came to Brussels to meet with the President of the European Commission – Mr Jose Manuel Barroso, in connection to the recently concluded negotiations on the new enhanced Partnership and Cooperation Agreement (PCA) between the EU and Kazakhstan. The new agreement still has to be signed by the parties and, subsequently, go through the in-depth analysis and voting in the European Parliament, which is responsible for ratifying it. The meeting in Brussels between the Kazakh president and the president of the European Commission was intended to be a political endorsement of the agreement.

Although Kazakhstan does not respect fundamental human and civil rights, and the country significantly lags behind its official commitments and international obligations it is the only state in Central Asia, with which negotiations on a second generation PCA with the EU have been launched and finished.

The event took place just one day after French prosecutors launched an investigation into allegations of illegal kickbacks between administrations of Kazakh President Nazarbayev and former French President Nicolas Sarkozy, in order to save three Kazakh oligarchs accused of corruption and money embezzlement from prison in Belgium, and conclude a 2bn EUR worth trade agreement between the two countries.

The Open Dialog Foundation is convinced that continuous political and diplomatic dialogue can help to improve the situation in Kazakhstan, therefore, we underline that human and civil rights should always be on the agenda when discussing cooperation with the Central Asian state. Numerous cases of human rights activists, opposition politicians and journalists that are being harassed or kept in jail because of their activity leave no doubts as to where Kazakhstan currently stands.

Enhanced PCA between the EU and Kazakhstan: