Vincent Degert, representing the European External Action Service answered questions from the Open Dialog Foundation concerning, amongst others, the Ukrainian film director Oleg Sentsov, persecuted by Russia. The reply was provided on behalf of the President of the European Commission Jose Manuel Barosso. 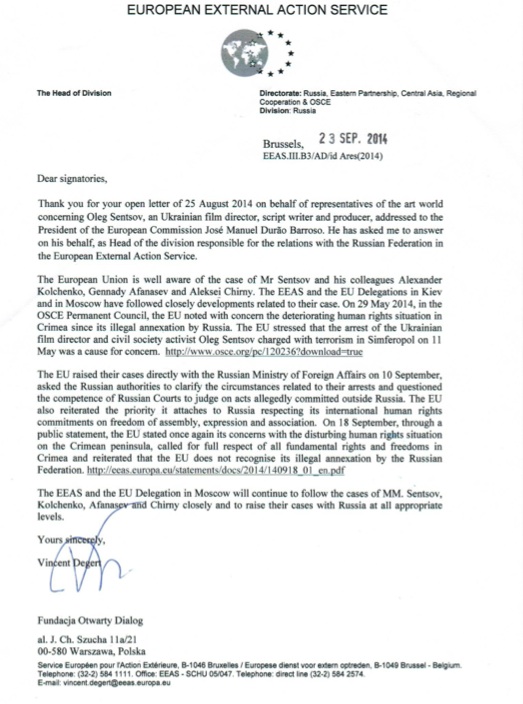 As Degert emphasises, the European Union is familiar with the matter of Sentsov and also the other Crimean activists accused of terrorism by FSB: A. Kolchenko, G. Afansyev and A. Chirniy.

In accordance with the information conveyed in the letter from the European External Action Service, the European Union raised the issue of the persecuted activists with the Russian Ministry of Foreign Affairs. On 10th September, Russia’s authorities were asked to explain the circumstances behind the detention of these people, and the competences of Russian courts to pass judgements on the alleged crimes outside of the territory of Russian Federation were challenged. On 18th September, in turn, in a public statement, the European Union raised the issue of violating human rights in the Crimea, called for the observance of civil freedoms and reiterated that the EU does not recognise the illegal annexation of the Crimea by Russia.