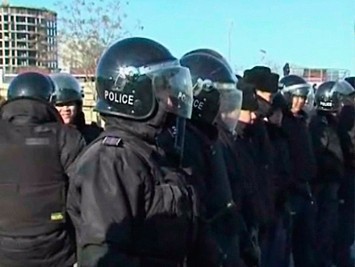 Calendar of strikes of the oil industry workers in Western Kazakhstan (Mangistau) (January, 2012)

02.01.2012 – More than 30 people were detained in Zhanaozen during the weekend for violating the curfew. 03.01.2012 – The Zhanaozen labour union activist Rosa Tuletaeva was detained. She was charged under the article which includes “organisation of mass riots.” The deed under this article is punishable by a term of four to ten years. 06.01.2012 – Ayzhangul Amirova, an activist of the coalition ‘Khalyk Maidany’ – ‘The People’s Front of Kazakhstan’ was apprehended when getting off the plane in Aktau. Recently she has worked on the coverage of events connected with the strikes in Zhanaozen. The KNB officers searched her apartment and her brother’s apartment, they seized computers, printers and documents. The Court extended the period of detention of the activist for 2 months. She was charged under the article 164.3 (“incitement to social discord, which caused grave consequences”) and she may be imprisoned for a term of up to 10 years. 06.01.2012. The Central Council of the ‘Khalyk Maidany’ Association issued a statement entitled: “Freedom for Ayzhangul Amirova!”.

06.01.2012 – A search of the office of the Zhanaozen branch of the OSDP party was conducted. 06.01.2012 – Ramazan Esergepov, the Editor-in-Chief of the ‘Alma-Ata Info’ newspaper was released from correctional facility . After his release, he laid flowers in memory of those killed in Zhanaozen. 09.01.2012 – Ramzan Esergepov accepted an offer to take the position of the head of the ‘Journalists in Distress’ Foundation. Let us remind ourselves that on the 8th of August, 2009 the Taraz court sentenced Ramazan Esergepov to three years’ imprisonment to be served in a  correctional facility, depriving him of the right to engage in publishing and journalistic activity for the period of two years. The reason for his arrest and for initiating the investigation was an article in the ‘Amla-Ata Info’ newspaper of November 21, 2008 entitled Who governs our country: the president or the KNS? in which an official letter written by the head of the KNS department for the Dzambul province of Kazakhstan was quoted.

09.01.2012 – The Central Council of the ‘Khalyk Maidany’ Association  issued a statement ‘On the political crisis, irresponsible government and early parliamentary elections’ which contained the political group’s opinion on the unconstitutional decision to cancel elections in  the town of Zhanaozen due to the state of emergence.

10.01.2012 – President Nursultan Nazarbaev vetoed the decision of the Constitutional Court which ruled that the election in Zhanaozen cannot be conducted due to the state of emergency imposed in the town earlier. Thus, the elections to the Majilis in Zhanaozen were held on the 15th of January, 2012. 10.01.2012 – The apartment of Nuriyash Abdreymova, a representative of the Communist Party of Kazakhstan in Mangistau Province, and the apartment of Rosa Tuletaeva, the activist arrested in Zhanaozen, were searched.  11.01.2012 – Pavel Engelgardt, a camera man, and Kanat Bukenov, a freelance ournalist, the crew of the ‘Stan’ video portal were detained in Zhanaozen.

13.01.2011 – Mukhtar Ablyazov‘s open letter to the President of the European Parliament and to MEPs was published. In the letter, he urges to freeze bank accounts and personal property of the persons found guilty of shooting in Zhanaozen and to deny them entry into the EU states.

15.01.2012 – The day of election of the members of the Majilis (the lower house) of the parliament of Kazakhstan.

15.01.2012 – Lord John Waverley, the chairman of the Kazakh-British All-Party Parliamentary Group who is currently observing the parliamentary election in Zhanaozen reported a low turnout in the first part of the day.

15.01.2012 – 32,303 inhabitants came to the polls in Zhanaozen, while the city has 50,768 voters. Thus, the turnout was 63%. According to the opposition website Guljan.org, a high voter turnout may be due to the fact that members of the military Special Forces who arrived in the city after December 16, 2011, also had voting rights.

15.01.2012 — Mart Zhanuzakov, a member of the maslikhat of the city of Koshetau (local representative body in the Republic of Kazakhstan) who was visiting the town as a journalist of the ‘Alga’ newspaper, and Dmitriy Shchelokov, an observer from the ‘Kuretamyr’ Social Foundation, were detained. 16.01.2012 – Alik Aydarbaev, the General Director of the ‘Razvedka Dobycha ‘KazMunayGaz’ company said at a briefing in Aktau that in the Mangistau region more than 1,700 laid-off oil workers will find employment. Two companies will be established: a transportation company and a drilling company. The first one will be ‘Transportation Technology Management and Drill-hole Servicing” LLP (in Aktau), and the second one: ‘Drilling Management and Drill-hole Servicing’ LLP (in Zhanaozen). He also suggested that there would be a possibility of re-profiling of workers, but he did not mention the specific framework under which it would be done.

17.01.2012 – Kazakhstan’s Central Election Commission announced the final results of election of members of the lower house of the Parliament, elected from the party lists: the ‘Nur Otan’ People’s Democratic Party won a landslide victory, gaining 80.99% of votes. Also, the ‘Ak Jol’ Democratic Party of Kazakhstan and the Communist People’s Party of Kazakhstan who scored 7.47% and 7.19% of the vote respectively are going to enter Parliament.   17.01.2012 – A conference entitled Zhanaozen: ‘from a labour dispute to the tragedy. What will happen after the parliamentary elections?’ was held in the European Parliament in Strasbourg. The meeting was attended by Vladimir Kozlov, the leader of the ‘Alga!’ party, Muratbek Tungishbaev, a blogger, and Muratbek Ketebaev, the president of the ‘Civil Activity’ Foundation. 20.01.2012 – Aleksandr Pyastolov, a lawyer and a representative of the striking oil workers of the  ‘Karazhanbasmunay’ JSC received an order to report to testify as a witness.

23.01.2012 – Searches were conducted in the offices of the ‘Vzglyad’ newspaper and the ‘Alga!’ party, which were engaged in the activity of reporting the events in Zhanaozen. Igor Vinyavskiy,  Vladimir Kozlov and Serik Sapargali were apprehended. The searches were also conducted in  the apartment of Mikhail Sizov, Vladimir Kozlov‘s deputy, as well as in the apartment of Askar Tokmurzin, the chief of security of the ‘Alga’ party office, and Gulzhan Lepesova, an accountant. 23.01.2012 – Vadim Kuramshin, a human rights activist was detained in the Kordai village (Kordai Region, Zhambyl Province). The National Security Committee acknowledged executing searches of apartments of some opposition activists within the procedure connected with the criminal case initiated against Ayzhangul Amirova, an activist of the striking oil workers of Zhanaozen. 25.01.2012 – Several police officers of Zhanaozen threatened to resign from their jobs if three of their colleagues are going to be convicted for abuse of authority. The police workers claim that that firearms were used by them legally on the 16th of December, 2011.

25.01.2012 –  The General Prosecutor’s Office of the Republic of Kazakhstan issued a statement on the events in Zhanaozen on the 16th of December, 2011. It is reported that “at present, six organisers of the riots were identified, namely: Saktaganov, Dzharylgasinov, Irmukhanov, Dosmagambetov, Utkilov and Tuletaeva, who were later indicted on charges under Article 241 section 1 of the Criminal Code, and they are all under custody”. For the use of weapons with in excess of authority, resulting in the death of people, criminal proceedings were instituted against the following persons: Bekzhan Bagdabaev, the head of the anti-extremist division of the DIA of the Mangistau Province; Yerlan Bakytkaliuly, the first deputy head of the Department of Internal Affairs of the town of Zhanaozen; Rinat Zholdybaev, a police inspector of the DIA of the Mangistau Province.

25.01.2012 – On the Square of the Republic in Almaty, an action in memory of the victims of the events in Zhanaozen in December 2011 was held. 25.01.2012 – The Norwegian Helsinki Committee condemned the arrests of opposition figures shortly after the departure of international observers.

26.01.2011 – In Almalinsky court of the city of Almaty, in closed session, a decision was ruled on the arrest of Igor Vinyavskiy, Vladimir Kozlov and Serik Sapargali who were apprehended on Monday, the 23rd of January, 2012 by the National Security Committee of Kazakhstan workers after the searches were conducted in the offices of the newspaper and the party, as well as in these persons’ apartments. In Alma-Ata detention centre of the NSC a closed trial was held, and as a result, their detention was extended by two months. All of them are also suspected of organising riots in Zhanaozen. Kozlov and Sapargali’s cases were initiated for “incitement to social discord, which caused grave consequences”. In Igor Vinyavskiy’s case, the article ‘calling for the overthrow of constitutional order” was applied. He may be imprisoned for a term of up to 7 years. 28.01.2012 – In Atyrau, dozens of civic activists held a protest action. The leaders of social organisations ‘Zaman’, ‘Arlan’ and some town residents demanded the conduct of an objective investigation into the deaths during the riots in the Mangistau Province.

28.01.2012 – Leaders and activists of the All-National Social Democratic Party held a rally in Almaty. The rally ended with arrests. Leaders and activists of the ANSDP party, namely: Bolat Abilov, Zharmakhan Tuyakbai, Amirzhan Kosanov and Amirbek Togusov were convicted of holding an unsanctioned rally. The Specialized Interdistrict Administrative Court in Almaty ordered the incarceration of Amirzhan Kosanov and Amirbek Togusov for 15 days, while Bolat Abilov is going to be incarcerated for 18 days (three days out of the total term were ruled for contempt of court). Zharmakhan Tuyakbai, a co-chairman of the ANSDP party received a financial penalty of 20 MCI (“monthly calculation index”, the amount of the penalty is approx. 30 thousand tenge).

30.01.2011 – At a press conference in Almaty, the establishment of the Social Protection Committee  was announced. During the meeting, a text expressing readiness to bail out Vladimir Kozlov, the leader of the ‘Alga’ party, was read out.