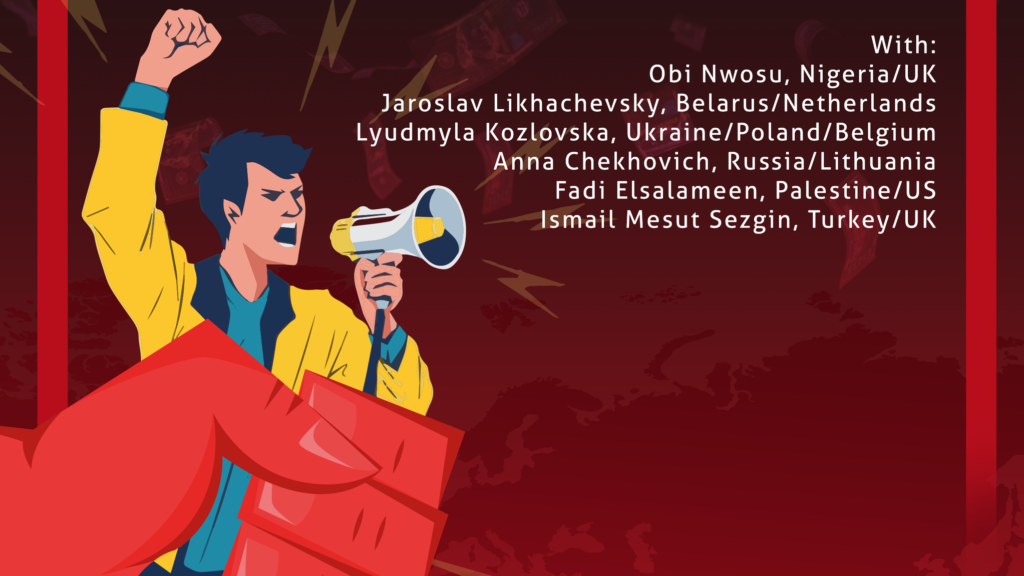 The Open Dialogue Foundation and MP Constantinos Efstathiou (Cyprus, SOC) would like to invite you to a side event at the upcoming session of the Parliamentary Assembly of the Council of Europe on 26 January 2023. The discussion titled Misuse of the Anti-Money Laundering Measures (AML) and Countering the Financing of Terrorism (CFT) regulations as a tool of transnational repression will take place in Room 3 at the premises of Palais de l’Europe (the headquarter of the Council of Europe) at 1 p.m. in Strasbourg.

One of the consequences of this abuse is financial exclusion and deprivation of property achieved by the means of terminating bank accounts and asset freezing. Moreover, international, European and bilateral legal assistance frameworks allow access to sensitive information (including banking data) by malicious governments. It permits them to use it against those deemed their opponents. Thus, such regimes are able to mock the principle of mutual trust between Council of Europe Member States or Partners for Democracy of PACE.

Faced with this challenge, rights defenders have increasingly resorted to crypto assets such as Bitcoin and stablecoins.

The event aims at:

(1) sharing best practices and experiences of civil society activists from all over the world – Poland, Ukraine, Belarus, Russia, Turkey, Palestine, Venezuela – who have been able to keep providing crucial support to dissidents and other people in need when effectively cut off from the traditional financial system;

(2) to develop recommendations what steps should be taken by PACE to mitigate the abuse of AML/CFT regulations as a tool of repression and prevent forcing NGOs to operate in a financial grey zone.

Lyudmyla Kozlovska, president of the Open Dialogue Foundation (ODF). In recent years ODF has been subjected to systemic politically motivated attacks by Poland, Kazakhstan and Moldova (under Vlad Plahotniuc’s rule). Poland’s fabricated accusations of money laundering, threatening national security against Kozlovska and other ODF’s activists led to abuse of the Schengen Information System, misuse of European and mutual legal assistance mechanisms as well as a Europe-wide smear campaign in the media. This resulted in the termination of ODF’s bank accounts in Belgium. In 2022, ODF won defamation lawsuits against the Deputy Minister of the Interior and Administration, First Deputy to Special Services Coordinator, Maciej Wąsik and Polish MEP Dominik Tarczyński, proving that their public, politically motivated accusations of ODF were groundless and  false. Recently, the Supreme Administrative Court in Warsaw ruled that Kozlovska expulsion from Poland and the European Union in August 2018 was arbitrary and unjustified because the evidence collected by the Polish secret service “do not allow the conclusion that Kozlovska poses a threat to state security”.

Jaroslav Likhachevsky, co-founder of the New Belarus platform and Bysol Foundation, director of AI company Deepdee from Belarus. The New Belarus based on the Golos platform and the Bysol Foundation experience has taken on the task of creating a Digital State for Belarus, outside of the reach of the Lukashenko’s regime. Bitcoin and USDT stabelcoin, in particular, are used to deliver humanitarian aid in Belarus by Belarus civil society and opposition to avoid mass arrests and political persecution.

Fadi Elsalameen, a prominent critic of corruption in the Palestinian Authority’s government led by Mahmoud Abbas), an adjunct senior fellow at the American Security Project and the Bitcoin Policy Institute. In 2021 the Bank of Palestine disclosed Fadi Elsalameen’s financial records after Palestinian Authority fabricated a criminal case against him, accusing Elsalameen of money laundering, threatening national security in response to Elsalameen’s anti-corruption investigations, exposing him and people associated with Elsalameen to retaliation, including an assassination attempt.

Ismail Mesut Sezgin, Turkish opposition political commentator and research assistant at Regent’s Park College, and self-employed business owner in the UK. Sezgin has become a victim of abuse of AML/CFT mechanisms in 2021 in Turkey when he was listed by the authorities among the FETO members and his assets were frozen. It has severely affected his relations with financial institutions in European countries as well.

Anna Chekhovich, financial director of Alexei Navalny’s Anti-Corruption Foundation (FBK) from Russia. Targeted by Putin’s regime, the foundation has gradually lost access to financial institutions. FBK has been using Bitcoin since 2015 to help overcome financial repression. At that time the Russian government began blocking the bank accounts of various foundations, even those very loosely connected to the FBK. Navalny and his family have also had their personal accounts frozen as did many people who worked on the FBK team. Bitcoin has given them a financial tool away from the reach of Putin’s regime.

Obi Nwosu, former CEO of a regulated Bitcoin exchange Coinfloor in the UK. Nwosu advocated and worked with regulators, including the The House of Commons Treasury Committee, advised the police, the Bank of England, HM Revenue & Customs and the intelligence services in the UK. Coinfloor worked closely with regulatory advisors across Europe. Nwosu will describe the reason why civil society and politically persecuted groups were unintentionally marginalised because of the way the existing AML/CFT regulations and directives work within the UK and in the EU.