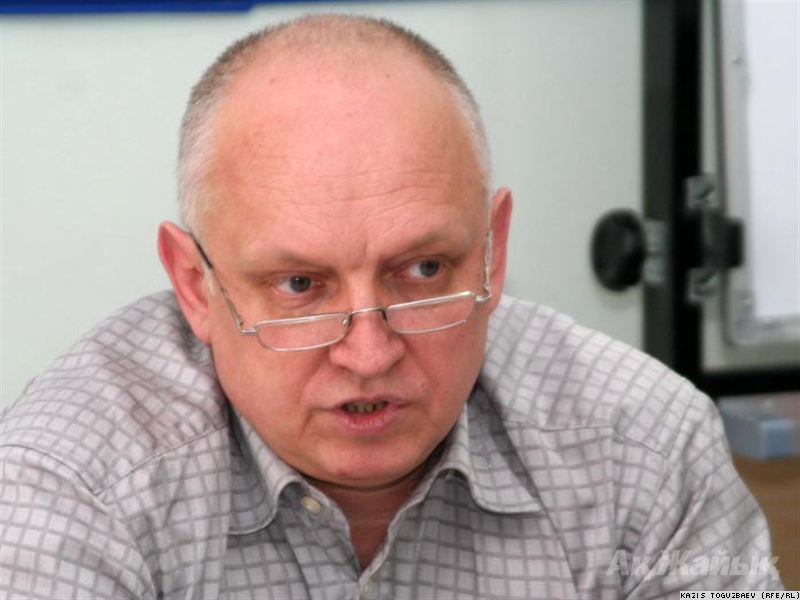 Urgent announcement: The Kazakh authorities are hiding the truth about Vladimir Kozlov’s health and threatening his wife.

The Kazakh authorities are withholding information about the critical state of health of Vladimir Kozlov, the leader of the unregistered party ‘Alga!’. This information was reported by the opposition media in Kazakhstan, as well as by the lawyer and the wife of the politician who was apprehended on the 23rd of January, 2012.

It was also reported that threats were sent to the home of Alia Turusbekova, Vladimir Kozlovs’ wife, saying that Vladimir Kozlov may be transferred to Zhanaozen to a detention facility with a stricter regime, if she does not cease providing information to the international society, and personally MEP Piotr Borys, on the progress of investigation of his case.

According to the ‘Respublika’ newspaper, Aleksey Plugov, Vladimir Kozlov’s lawyer announced that his client had undergone surgery at the Central Military Hospital in Almaty. Neither Kozlov’s lawyer or his wife are allowed to visit or pass any packages to him, which has been repeatedly ​​stated before.

The Open Dialog Foundation hereby urges the international community to not allow the wife of Vladimir Kozlov, the opposition party leader, to be blackmailed and to demand an independent investigation of the state of his health.

The Open Dialog Foundation calls on the authorities of Kazakhstan to monitor the health conditions of Vladimir Kozlov and to inform his trustees about it.

Vladimir Ivanovich Kozlov, born in 1960. A journalist, a politician.

Reference: He received a degree in “Energy supply of industrial entreprises”.

In 1991 he established a private cable television channel named “AKTiVi”. Following the merger of two television stations, he became the chief editor of the private broadcasting television company ‘Aktau-Lada’ in which he worked until 1998.
In the years 1998 -2001, he was an assistant for the issues of Public Relations to the President of the Mangyshlak nuclear power complex (MAEK).
In January 2001 he was invited by the leaders of the NGO ‘Democratic Choice of Kazakhstan’ in Almaty to organise press service and PR-activities of this social association.

01.07.2011. Vladimir Kozlov made a statement on the events in Zhanaozen in which he pointed out that the local authority, the leadership of the ‘Ozenmunaygaz’ and law-enforcement agencies of Mangistau deliberately provoke striking and starving workers to revolt.

21.08.2011. Meeting of Vladimir Kozlov with the striking oil workers of Zhanaozen.

26.10.2011. Vladimir Kozlov, Ayzhangul Amirova, Serik Sapargali, Igor Vinyavskiy and other public figures have issued a statement “about crime and untrammelled provocations in the Mangistau Province and irresponsibility of the agencies of the Ministry of Interior” in connection with the attacks on the strike activist Estay Karashaev and the crew of the ‘Stan-TV’ video portal.

17.01. 2012. Vladimir Kozlov took part in the conference Zhanaozen: from the labour dispute to the tragedy. What will happen after the parliamentary elections?, held in the European Parliament in Strasbourg.

23.01.2012. Vladimir Kozlov was apprehended on suspicion of committing a crime. Charges were brought against Kozlov that with a group of persons “he committed intentional acts aimed at inciting social discord, by distributing literature and other media that promote social discord, which caused grave consequences.” The investigation body accuses Kozlov that in September 2011, he sent to Zhanaozen leaflets with M.K. Ablyazov‘s appeal entitled “Partizans of the sacred Mangistau!”, “Awake, Kazakh people, become free!” for distribution among participants of the illegal action and  other people in the region.

25.01.2012. The Norwegian Helsinki Committee condemned the apprehensions of opposition activists.

26.01.2012. In Almalinsky court of the city of Almaty, in closed session, a decision was ruled on the arrest of Igor Vinyavskiy, Vladimir Kozlov and Serik Sapargali who were apprehended on Monday, the 23rd of January, 2012 by the National Security Committee of Kazakhstan workers after the searches were conducted in the offices of the newspaper and the party, as well as in these persons’ apartments.

30.01.2012. At a press conference in Almaty, the establishment of the Social Protection Committee was announced. During the meeting, a text expressing readiness to bail out Vladimir Kozlov, the leader of the ‘Alga’ party, was read out.

31.01.2012. Vladimir Kozlov‘s wife Alia Turusbekova made a statement in which she accused the government of Kazakhstan of making attempts to isolate Vladimir Kozlov.

01.02.2012. Matteo Mecacci, the chairman of the Committee on Human Rights, the OSCE Parliamentary Assembly urged Kazakhstan to honor its commitments to the OSCE regarding the respect for freedoms and to “release political prisoners, such as Igor Vinyavskiy and Vladimir Kozlov.”

03.02.2012. The appeal filed by Vladimir Kozlov (the leader of the unregistered opposition party ‘Alga’) and an opposition politician Serik Sapargali was dismissed by the Appellate Court of the Almaty City Court. Vladimir Kozlov and Serik Sapargali’s criminal cases are conducted by investigators of the Department of National Security Committee for the Mangistau Province.

06.02.2012. In Kostanay, security forces workers dressed in civilian clothes raided the office, and, referring to the decision of Toyzhan Marat, the prosecutor of Zhanaozen, announced the seizure of the premises belonging to Vladimir Kozlov, the leader of the ‘Alga!’ party.

07.02.2012. In Berlin, a meeting in solidarity with the victims of the Zhanaozen tragedy and political prisoners in Kazakhstan was held. The event took place at the building of the German Society for Foreign Relations. It was attended by activists of international labour unions, representatives of European civil society organizations and citizens of Kazakhstan, residing in Germany. The meeting was organised by the Open Dialog Foundation (Poland), the German left-wing labour unions and Andrej Hunko, a member of the Bundestag for the Left Party.

07.02.2012. The Ukrainian journalistic movement ‘Stop Censorship!’ issued a statement in which it strongly condemned the oppression that the Kazakh authorities have subjected independent journalists to.

07.02.2012. The workers of the NSC raided the ‘Alga!’ party office in the town of Kyzylorda, presenting a warrant for the seizure of the office. The NSC workers, namely: Daniyar Egeshbaev and Adil Saylybaev came to give explanations and to draw up the minutes from the seizure of the ‘Alga!’ party office. Four activists of the party were handed orders to report for questioning to the NSC.

07.02.2012. Three NSC workers burst into the Kokshetau office of the ‘Alga!’ party and announced the seizure of the apartment.

13.02.2012. Alia Turusbekova, the wife of Vladimir Kozlov, the arrested leader of the unregistered opposition party ‘Alga’, demanded to respect her husband’s civil rights. In the statement, distributed at a press conference in Almaty, it is stated that the Vladimir Kozlov’s rights have been violated since the day of detention: food and things for him are not accepted, Turusbekov, his defense councel, is not allowed to see him, they block up visits, Vladimir Kozlov is deprived of the posibbility to fully communicate with his lawyer.

17.02.2012. N. Shayken, an investigator of the Department of the NSC of the city of Almaty allowed to pass some food products to Vladimir Kozlov, the arrested leader of the ‘Alga’ opposition party, but denied Kozlov’s wife the right to visit him.