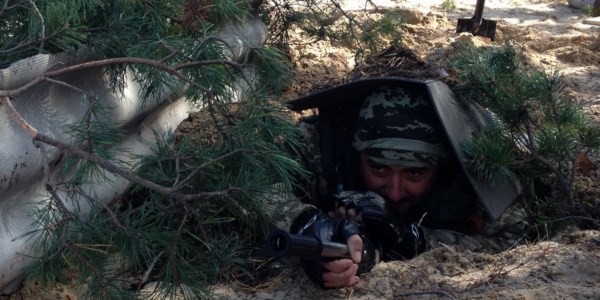 We have been following the events in Ukraine for months. Our correspondent Agnieszka Góralska is striving to report from the locations where military and terrorist actions are underway. She is documenting her work thoroughly, posting her coverage on Facebook and the Maidan24 website. So far, she has covered the developments from such cities as Kharkiv, Mariupol, Lugansk, Donetsk and Odessa.

Agnieszka Góralska spent February at Maidan in Kiev. She was there during the most dramatic events of 18-20 February 2014. Right after the Revolution’s triumph she embarked on her monitoring mission to Kharkiv and Donetsk. There, she witnessed the birth of the “Donbass”volunteer battalion and other such formations preparing to defend the area against Russian aggression. She participated in dozens of marches “for one Ukraine”as well as those attracting supporters of Russia. Agnieszka talked to people on both sides of the conflict, seeking to understand their rationale. She was there when the Donetsk and Lugansk National Republics were proclaimed. She monitored the famous referendum in Donetsk on May 11, the establishment of “people’s rule”in Sloviansk and the coming of “Cossacks”and “Kadyrov’s men”.

She has been staying in the ATO zone since the very beginning. She has seen the conflict escalate and how the ‘war without a war declaration’has developed. She helped evacuate refugees from Gorlovka under fire. Together with volunteers and medical personnel, she went where Ukrainian soldiers were stationed to listen to their stories and witness their heroism. She was twice in the city of Mariupol under siege: First, when the DNR forces occupying the city surrounded the Ukrainian troops; and again, when the liberated city was surrounded by Russian soldiers. She has spent time in hospitals with those who suffered injuries and shared the pain of parents whose sons died in the ATO.

Agnieszka has collected a vast amount of material, a lot of which can be published only when the war is over.