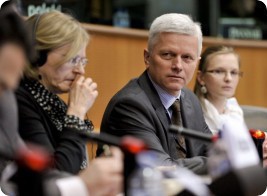 Conference in EP on human rights in Kazakhstan

Kazakhstan reminds me of Egypt or Tunisia, says Muratbek Ketabayev, President of Grazhdanskaya Aktivnost (Civil Activity) Kazakh Foundation. Mr. Ketabayev visited the meeting organized on Tuesday by Andrzej Grzyb, Vice-Chairman of the Subcommittee on Human Rights in the European Parliament in cooperation with the Open Dialog Polish Foundation.

Early presidential elections in Kazakhstan will be held on April 3; they were due to be held in autumn 2012. According to Mr. Ketabayev, Kazakh President Nursultan Nazarbayev, ruling the country for 22 years, arranged early elections, as he failed to extend his presidency until 2020 by organizing referendum.

„Suffice it to say, that until February 3 such term as early elections did not exist in our country. On February 2 the President sent a proposal to the Parliament to make amendments to the Constitution – the Parliament accepted it unanimously. (…)

On February 4 the President set a term of the next elections for April 3. This is not just a mockery of common senses, but a defilement of democracy,” commented Mr. Ketabayev.  Vladimir Kozlov, oppositionist, also participated in the meeting. He was supposed to take part in the elections in 2012, still he will not nominate himself a candidate in these elections due to the requirement to speak Kazakh fluently. He is a Russian-speaking person. “Three other candidates have been registered, but everyone knows that in such conditions President Nazarbayev will be re-elected,” says Mr. Kozlov.

During his talk with the Polish Press Agency (PAP) he added that, except for the ruling party and the party of “loyal” people, there were two registered groups (communistic and social-democratic) which “could be called opposition”. However, opposition is weakened as there is no access to information. “Most people live in the villages, where there is not just a lack of the Internet, but in most cases there is no telephone, television or electricity,” he added  . “To illustrate how the right to assemble in Kazakhstan is honoured, we made an experiment.Before the OSCE Conference in Warsaw in 2010 we had been sending requests to organize a picket for 10 days – three people were to picket for 15 minutes in front of the President’s headquarter. We sent 156 requests and received 156 refusals, and we brought them to Warsaw,” added Mr. Kozlov.

Kozlov’s group called Alga has been trying to be registered as a political party for a few years. “The Act of Political Parties allows not to make a decision concerning registration of parties. The process can be aborted to make an inspection which can last for years,” he said. Oksana Makushina, an editor of Kazakh newspaper “Respublika” said, that in Kazakhstan there were 10 mass media in opposition to the power at the most.    ”It is easier to understand the situation, if you know that there are nearly 3 thousand newspapers and a few hundreds of TV stations in Kazakhstan, but none of it is independent and free, she said. “Our newspaper has been printed and stapled by us, as all publishing offices refuse to print for us, although we are working legally.”

Raushan Yesergepova, another representative of Kazakh mass media from Almaty Info said, that editor-in-chief of her newspaper, being privately her husband, was arrested after publishing an article titled “Who really rules our country: President or Committee of National Security?” The court trial was in camera, without an access to a lawyer. Neither did he receive his verdict nor indictment. During two of three years of his sentence he received seven refusals to change his sentence, the authorities do not want to grant him a parole. Therefore I came to the European Parliament to draw your attention to an issue of freedom of speech in Kazakhstan and my husband’s destiny, said Mrs. Yesergepova.