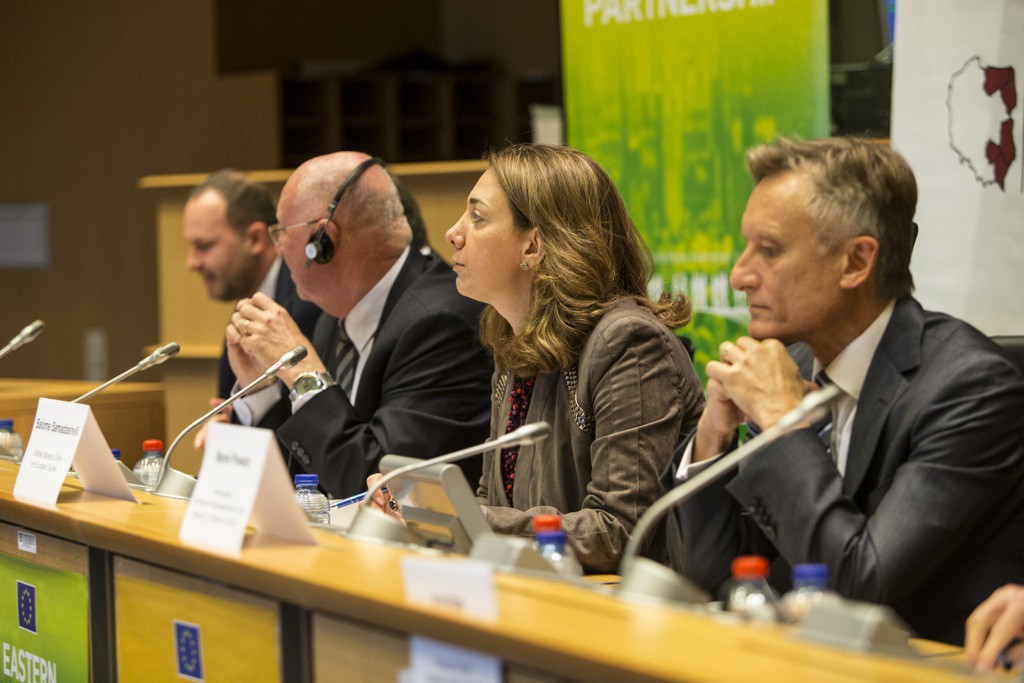 The Open Dialog Foundation co-organises the 2nd edition of the Eastern Partnership Days in Brussels, initiated by the East Poland House

The 2nd edition of the Eastern Partnership Days took place in Brussels from November 3 to 5, 2014. Upon the initiative of the East Poland House, and with the support of other organisations and institutions, amongst which the Open Dialog Foundation, a three-day event was organised in Brussels to jointly discuss the developments of the situation in the Eastern Partnership countries, as well as the direction, in which the EU’s support to these countries should go. With a programme full of art exhibitions, conferences, seminars, movie screenings and concerts, the Eastern Partnership Days were a particular moment for the Brussels expat community, which let them reconfirm their support to the countries lying to the East of the EU border, but more importantly to get to know their cultures better.

The event started on the evening of November 3, with the opening of the “Eastreet 2” exhibition of street art photos at the wonderful premises of the East Poland House. The guests were greeted by the hosts and by the creator of the exhibition. They also heard a few words from Anna Koj from the Open Dialog Foundation, who reminded everyone that occasions such as the Eastern Partnership Days are of great importance because they let the European community keep the discussion alive and adapt their work and support according to the real needs of the partner countries. They are a clear sign that concrete actions are necessary in order to fulfil the basic aim of the Eastern Partnership programme, which is to help develop full democratic systems in the countries that are members of this initiative.

In the morning of November 4, the discussion got more political at the conference organised in the building of the European Parliament. Experts, both from political and civil society discussed the recent developments in the member countries of the Eastern Partnership. Ukraine was very present on the agenda, being a prime example of the fact that systemic support is required in order to support the local society with concrete know-how and experience sharing in building support for democracy and fighting corruption. However, it was also underlined that each of the Eastern Partnership states needs a tailored approach, which should consider the particularity of the country and its individual situation. Part of the discussion was also dedicated to the issue of the recent parliamentary elections in Ukraine, as well as the upcoming elections in Moldova.

Over walking lunch, served at the premises of the European Endowment for Democracy in Brussels, the guests could observe the exhibition of photographs “Faces of the Maidan”, assembled by the Open Dialog Foundation. A collection of photos that show the daily life of Maidan from its most intense period of time. Photos that capture expressions on people’s faces, their struggle to fight for a better future, for freedom. For some, it meant being on the forefront and physically fighting to maintain the small piece of the city of Kyiv, the Maidan square, which was people’s last resort and their desperate fight to preserve dignity and to strive for more democracy. Others helped with simple gestures and basic actions, such as preparing food, directing people to points were they could get information, that were so much needed and that in the context of the developments on Maidan acquired particular heroic symbolism. The Open Dialog Foundation was proud to have included in the collection some photos taken by our volunteer, who went with us to Kyiv to monitor the situation on the ground in the most important moments of Ukraine’s fight against the corrupt regime.

The afternoon of November 4 gathered the participants for a workshop at the EED, during which representatives of a number of civil society organisations shared their experience of campaigns and cultural projects that successfully involved groups from different Eastern Partnership countries. They provided useful tips and suggestions and insights into what they think made their projects successful or why, in some cases, they maybe could have done a better job.

The evening brought everyone to a fantastic concert of The Ukrainians. Traditional Ukrainian folk rhythms, mixed with rock tunes made the mood of the evening. A great moment to bring along friends and feel the great atmosphere that carried on with us throughout the whole initiative.

On November 5, 2014, the East Poland House held its doors open to those who wanted to come by and see the exhibitions of photos “Faces of the Maidan” and “Eastreet 2”. A great occasion to reflect in more calm upon the photos that were being presented. In the evening, the Eastern Partnership Days ended with an interesting cultural event, dedicated to Georgia. The screening of Georgian movies for all those who were lucky enough to register on time, as places were limited.

The success of the Eastern Partnership Days initiative lies in the fact that it combines serious discussions on topics of high political, geo-political and economic importance with a cultural celebration of the EaP countries. It brings in the spirit and lets everyone, including the politicians, the diplomats and the expat community in Brussels become a little bit more Ukrainian, Georgian, Moldovan, Azeri, Armenian or Belorussian.