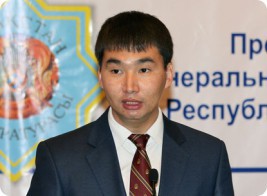 The investigative team headed by the special prosecutor has been continuing the investigation into the criminal case, initiated on charges of mass disorders that took place in the town of Zhanaozen on the 16th of December, 2011.

As a result of the riots, 12 people died of gunshot wounds, two persons died from the injuries received they sustained, one person died from burns suffered during the plundering of the ‘Sulpak’ trade centre, and one  person died from shotgun wounds, which was  unrelated to the riots.

The investigative team is implementing comprehensive measures to establish the circumstances and causes of the events.

So, as of today, during the investigation 2277 testimonies have been taken, and more than 200 forensic examinations have been carried out.

In order to identify additional witnesses and potential eye-witnesses, a door-to-door campaign was carried out in the area of the central square of the town, according to the data, 1128 people were questioned.

In order to restore the chronology of the events, according to testimonies of witnesses, video footage and other materials,  a map depicting the locality  of  gathering places and movement of the participants of the riots and police officers was created.

Videotapes, confirmed by the testimony of witnesses, made it possible to identify the organisers of the riots as well as active participants.

Currently, seven organisers and 36 active participants in the riots and looting have been identified and prosecuted and, 29 of them are under arrest, the remaining 14 were released on bail with conditions that they were not to leave the town.

In parallel with these actions, under various articles of the Criminal Code, criminal prosecutions have been initiated against managers and employees of the Department of the Interior of the Mangistau Province, the former officials of the local executive bodies and top managers of oil companies.

As stated above, the investigation team is conducting all necessary measures in order to carry out a full and comprehensive investigation of all the circumstances surrounding the incident and they are checking any information that may be relevant to the case.

Unfortunately, despite repeated appeals to the public through the local media, we do not observe any manifestations of the public sprit or provision of necessary assistance to the investigators in the course of their work.

At the same time, we observe an active dialogue between the alleged eyewitnesses of certain events and some particular media and public organisations.

According to available data, provision of ‘sensational news’ regarding certain details of the riots and their consequences to the media for a particular fee even managed to turn into a business.

Attempts undertaken by the investigators to confirm the disseminated information is being potrayed as the exertion of pressure upon, and harassment of, witnesses and eyewitnesses.

At the same time, as shown by our examinations, the vast majority of the published information in these media communications is provocative and it is deliberately misleading.

With reference to various rumors or anonymous sources, individuals and the media disseminate information about dozens of dead and hundreds of wounded persons; this information  is allegedly concealed by the authorities.

On the 14th of February, 2012, in the online version of the Russian ‘Novaya Gazeta’ in the article entitled ‘A yurt – a sign of trouble’, 73 were reported dead, and on the 5th issue of the ‘Golos Respubliki’ newspaper, in the publication ‘Zhanaozen became Khatyn in Kazakhstani style’,  the  the total of 300 victims was reported.

At the same time, for almost two and a half months after the infamous events, the media mentioned only three names of alleged victims of the disorders that do not appear in the official list of the General Prosecutor’s Office.

The former, as you know, was found alive and well and it transpired that he did not participate in the riots, and information about Andamasov’s death and the disappearance of Uzakbaev was not concealed by anyone; these facts were officially registered in the office of law enforcement body.

Thus, on the 23rd of December, 2011 in the basement of the house number 39 of the 4th district of Zhanaozen an unknown man was found dead.

The police immediately initiated a pre-investigation check to establish his identity and the circumstances surrounding his death.

Akmaral Chuvakbaeva, who was ordered to come to the police station for identification of the body on the 30th of December, she subsequently identified the deceased as her husband Yusuf Andamasov.

According to the explanations given by Chuvakbaeva, for the past three years her husband has not lived with his family, he regularly abused alcohol. He was seen for the last time  on the 13th or 14th of December, and until the 30th of December when she was ordered to come to the police, she did not conduct searches for her spouse, because she thought that he was drunk somewhere, as was his usual condition.

A forensic examination which was carried out did not reveal any injuries on Andamasov’s body,  alcohol was confirmed to be in his bloodstream.

As a result of the verification, the initiation of a criminal investigation into the circumstances surrounding the death of Andamasov was deemed unecessary due to lack of evidence that a crime had took place.

The legality of the decision made is being verified.

As for Dzhalgasbay Uzakbaev, the statement regarding his disappearance came to the police on the 22nd of December, 2011.

On the basis of the filed complaint, investigative work was initiated and a series  of operational activities have been undertaken in order to locate Uzakbaev.. Unfortunately, it has not yet yielded positive results.

Thus, as of today, there is no credible evidence that Andamasov and Uzakbaev were victims of the riots.

As previously reported, information, published in some media  rearding scores of fatalities and hundreds of injuries is apparently misinformation, and arguments cited in support of the data are  fictitious having been created by authors of anonymous identity.

This is corroborated by the actual data which is easily verifiable.

Thus, with reference to the words of the woman, allegedly a surgeon-resuscitator of the Zhanaozen Municipal Hospital, the already mentioned ‘Novaya Gazeta’ published information that on the 16th of December,  22 people died in the hands of the surgeon, and on the 17th – one more person, and on the 19th of December, a girl who had been raped by the riot policemen was delivered to the hospital.

However, in the surgical department of the Central Municipal Hospital of Zhanaozen no female doctor has ever worked or is currently working, what is more, there is no such position as a surgeon-resuscitator in the hospital.

The information about the number of persons who died in the hospital, and the admission of the raped girl to the hospital was denied by the head of the department of surgery of the municipal hospital, Mr. Khhairov.

The website www.publicpost.ru in the article The Zhanaozen people told their version of the massacres in Zhanaozen reported that in the morgue of Zhanaozen there are unclaimed bodies of children, allegedly pupils of the local orphanage.

We officially declare that the facts regarding the unreported disappearance of children in Zhanozen was not registered, no complaints, claims and statements were filed in this matter. This also concerns the pupils of the town orphanage.

106 pupils who were on the list on the 16th of December, 2011 are currently residing in the orphanage.

Some of the media published a list of patients, allegedly concealed by the authorities, which they received in the waiting room of the town hospital. They claim that among others, some children with injuries inflicted during the riots are includedin the list.

This prove s that the main premise of these newspaper articles suggesting that the government is concealing information relating to the children who have sustained injuries during the riots, have not been based on  reality.

Also, the articles about the mass disappearance of people and advertisements placed all around the town, informing of  missing relatives, do not correspond with reality.

Such searches are conducted only in relation to the above named; Dzhalgasbay Uzakbaev and it is the only case of this nature.

There are no other people registered who disappeared on the 16th of December, 2011 and after this day in Zhanaozen.

In an article entitled The town of the dead will keep its secrets until spring, published in the ‘Golos Respubliki’ newspaper, with reference to the anonymous interlocutor, it was stated that the corpses of two men and one woman were found in a grave during the burial of  deceased female local resident, on the eve of the December events..

It was established that during the period from the 13th to the 15th of December in Zhanaozen, only one woman died, and her close relatives have categorically denied the story of the discovery of unknown corpses.

In the same article, it was reported that several corpses were found in the urban sewage system.

Employees of the companies: ‘Ozeninvest’, ‘Ozenzhylu’ and” Tazalyk’, responsible for servicing the town sewer and landfill, who were interviewed in this matter, did not confirm the detection of dead bodies in the areas and/or territories serviced by them.

No such messages have been reported to the law enforcement agencies.

The wife of one of the men who was arrested on charges of involvement in the riots, reported in the press of hundreds of victims. She also stated that the yurts were set on fire and the looting of shops was organised by police officers.

However, during her interrogation it was established that the number of deaths was based on hearsay, and the statement of misconduct of police officers was based on the questionable information regarding the presence of the people in uniforms near the yurts and the shops.

At the same time, even the available video materials in the Internet resources refute the fact of the presence of the police in the Zhanaozen central square at the time of burning of the Christmas tree and the festive yurts.

In addition, the owners and tenants of the yurts put up for the holiday period directly pointed to the fact that their yurts were destroyed and set on fire by the participants of mass disorders.

In the media, there are also other publications, which bear the signs of misinformation.

All such messages will be checked and, if there are sufficient grounds, the perpetrators will be brought to justice.

First of all, we mean the administrative responsibility for knowingly giving false information to the media (Article 347 of the Code on Administrative Offences of the Republic of Kazakhstan).

We would like to underline again that the General Prosecutor’s Office in conjunction with other law enforcement agencies has taken exhaustive measures to ensure the full and objective investigation of all the circumstances of the events that have occurred in Zhanaozen as well as full availability of public information related to the progress and results of the investigation.

Individuals who are in possession of reliable information about certain events, or other information that will help to ensure the thoroughness and objectivity of the investigation, are requested to contact the investigative group or the prosecutor.

The General Prosecutor’s Office hereby officially informs that the witnesses and eyewitnesses of certain events who contact the investigating authorities will not be subjected to any persecution; on the contrary, all the procedural rights in accordance with their status are guaranteed to them.

If necessary, they may be included in the witness protection programme stipulated in the criminal-procedural legislation.

We ask that the media representatives who report the news do so based solely on proven facts and verified information, and to prevent the publication of false information.

We call on the inhabitants of the Mangistau Province to respect the rule of law and not to be amenable to the misinformation which is distributed as a means of provocation.

More on this topic:
riots , Prosecutor General of Ukraine