Putin’s Justice in a French Court

The former chess champion and Russian political opposition figure Gary Kasparov having come provide his support to the wife and the daughter of the Kazakh Mukhtar Ablyazov at the Lyon tribunal on October 17, 2014.

The Lyon courtroom that hosted the extradition hearing of Mukhtar Ablyazov on October 24, 2014 was certainly much more elegant than the shabby Moscow courtrooms where Mikhail Khodorkovsky and Pussy Riot received Russia’s pale imitation of justice. But the spirit of Vladimir Putin was as clearly present in Lyon as it is in Moscow, and the result was shamefully similar.

The Lyon court’s judges decided to extradite the persecuted Kazakh businessman to Russia, presuming Russia’s respect for European law instead of recognizing the obvious truth that there is no law in Russia other than that of Putin.

I attended the hearing in Lyon, along with two other Russians with deep personal experience with Putin’s court system, in the hopes of testifying about how hopeless it was to believe Ablyazov could receive a fair trial in Moscow. But we were not allowed to testify, and while I cannot speculate on the intentions or motivations of the Lyon judges, this is a clear case of moral corruption. It is an insult to the many Russian political prisoners past and present to pretend that Russian courts are anything but an arm of the Putin dictatorship.

For the crime of supporting the opposition of a dictator, Kazakhstan strongman Nursultan Nazarbayev in this instance, Ablyazov has been persecuted since 2002 and far beyond the borders of his homeland. Nazarbayev has been in power since 1989 and has relentlessly persecuted any and all opposition or criticism to his rule. Despite the many things that all dictators have common, Nazarbayev does have some outstanding issues with Putin, and Ablyazov will be a useful bargaining chip in these power games. This, and squeezing any money they can out of Ablyazov, is the only reason Putin’s regime is interested in the case.

Lev Ponomarev, the renowned Russian rights activist who founded Memorial and who has battled Putin’s crackdown on civil society at every turn, joined me in Lyon. Also with us was Mark Feygin, a lawyer and, like Ponomarev, a former member of the Russian parliament. Feygin represented Pussy Riot, among other political persecution cases. He has witnessed first-hand the purely political nature of Russia’s justice system today, and he has first-hand experience of the problems that Ablyazov is already encountering in having fair proceedings in Moscow. The three of us wished only to testify to the French court about what Ablyazov would face were he to be sent to Russia.

This case brings to mind the Magnitsky case. The names of seven of the judges, investigators and collaborators responsible for the Russian criminal investigation concerning the Kazakhstan political opponent are found on the so-called “Magnitsky List” in the United States, for their involvement in the wrongful imprisonment and murder in prison of Sergei Magnitsky, the whistleblowing anti-corruption lawyer whose name has become a symbol of the brutality of Putin’s regime. The European Parliament also recognized the horrific and political nature of Magnitsky’s death. And yet in Lyon, Advocate General Christian Ponsard disgraced himself and the French justice system by denouncing the Magnitsky case as a fabrication of crooks, “invented by people prosecuted by the Russian courts”! One felt as though in Moscow’s Basmanny Court, not in France.

The Russian prosecutors sent no evidence to Lyon – they claim to have a room full of boxes of papers on the case – saying that the court did not request any. As in Putin’s courts, evidence is not necessary and witnesses for the defense are banned. In face of all proof to the contrary, Europe continues to pretend Russia plays by the same rules and should be afforded the same rights and privileges as democratic partners. Last year, an Italian judge hurriedly approved the capture and extradition of Ablyazov’s wife and young daughter to Kazakhstan. They have since been released and granted refugee status in Italy, where the embarrassed Supreme Court of Cassation called the deportation “manifestly illegitimate.”

We can hope for a similar result when Mukhtar Ablyazov’s case reaches the French Court of Cassation. If France sees no obstacle to handing a political dissident over into Putin’s hands, his blood, and his freedom, will be on France’s hands. The conditions of liberté and égalité may perhaps be satisfied with regard to certain provisions of the law on extradition. But when it comes to fraternité with Putin’s Russia, we must first obey the higher laws of morality, justice and human rights. 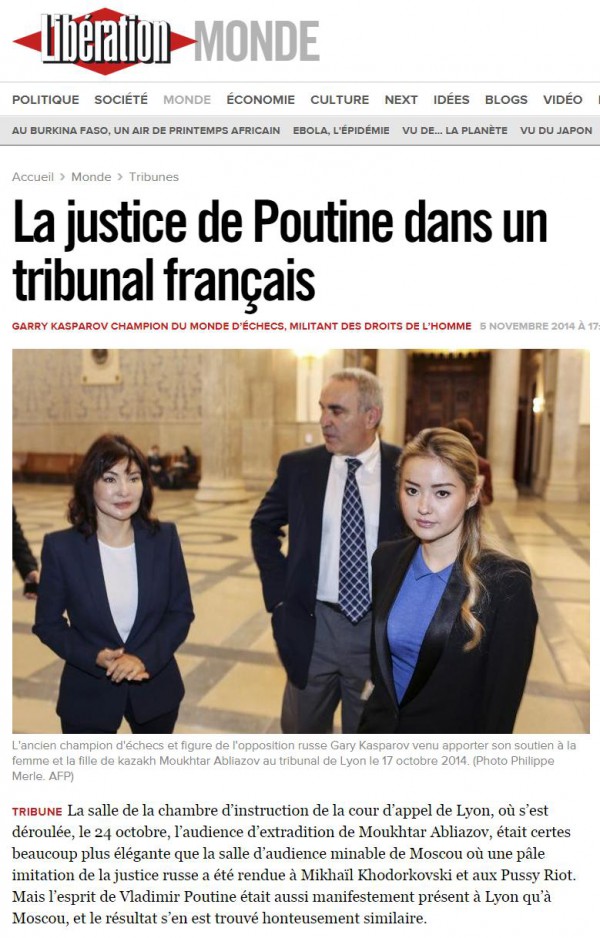