Oleg Sentsov, Oleksiy Chirniy, Gennadiy Afanasiev and Oleksandr Kolchenko were listed as Ukrainian citizens in the reply from the office of the Russian Federation’s Prosecutor sent to the Ukrainian deputy O. Bryhynets. To date, in the criminal case instituted against the activists from the Crimea, the Russian authorities maintained that the detainees had the citizenship of the Russian Federation. Letters to a similar effect were received also by the Open Dialog Foundation and the deputy to the Polish Seym Andrzej Lewandowski.

To date, in the criminal case instituted against the activists from the Crimea, the Russian authorities maintained that the detainees had the citizenship of the Russian Federation.

As the Ukrainian deputy claims in its letter, the office of the Prosecutor General did not provide answers to the questions which had been asked. A complete list of Ukrainian prisoners was not attached for instance, and only the ones whose fate is known to the Western public were mentioned. It was said, at the same time, in the reply, that the detention and the criminal cases opened against the Ukrainians were conducted in conformity with the law. And the state of health of the detainees permitted their detention. 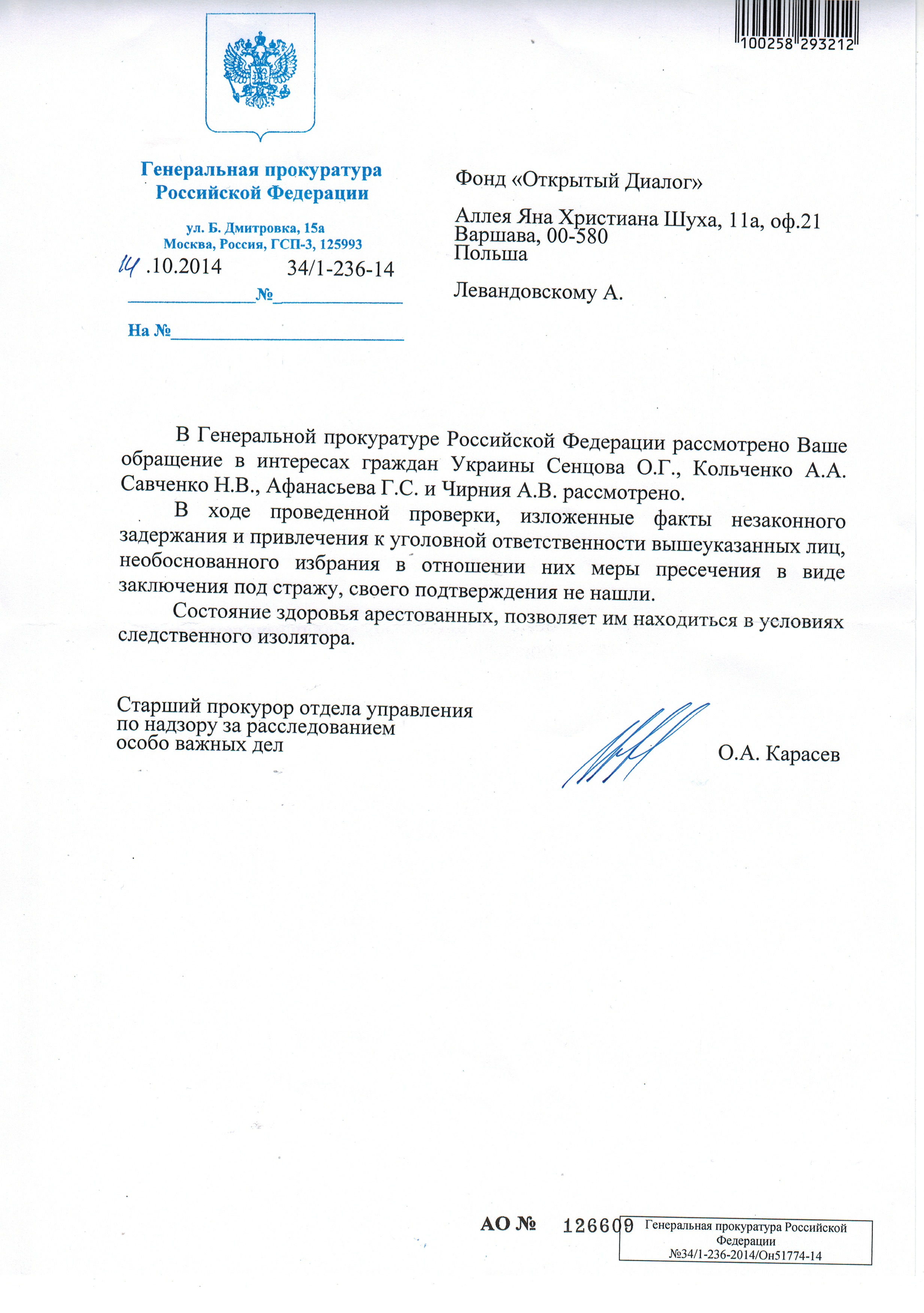 Oleg Sentsov, the Ukrainian film director and pro-Ukrainian activist and his three associates were illegally abducted in the occupied territory of the Crimea by Russian FSB agents and transferred to Moscow on 23rd May 2014. Sentsov and his associates were detained covertly by FSB forces. For many days, no one knew where they were. At the same time, no charges were made against the abductees. It was only after they had been taken to Russia – where they are being kept now – that they were accused of planning a terrorist attack and of membership of terrorist organisations. As the detainees did not refuse to accept the Russian citizenship within one month, as prescribed by the Russian authorities, they automatically became citizens of the Russian Federation. In this way, Sentsov, Kolchenko, Afanasyev and Chirniy were given the citizenship of the Russian Federation against their will, after the takeover of the Crimea. At the same time, following the logic applied by the Russian authorities, their Ukrainian passports were to lose their validity.

See the reply from the Russian authorities to the deputy O. Bryhynets
See english translation