During its presidency of the European Union in 2009, the Swedish authorities proposed  launching the Eastern European Partnership programme with the project regarding energy efficiency and the environment, the financial support for which will come from the Fund.

The decision about the establishment of the Eastern Europe Energy Efficiency and Environment Partnership Fund (hereinafter – the E5P Fund) was adopted on 28 April, 2009, jointly with the European Bank for Reconstruction and Development, European Commission, European Investment Bank, the Nordic Investment Bank, the Nordic Environment Finance Corporation, the International Bank for Reconstruction and Development and the International Finance Corporation.

The E5R Fund was established by combining the contributions of benefactors for the implementation of financial support in the form of grants and technical assistance to implement projects aimed at the improvement of energy efficiency and the environment, which should result in a significant reduction in energy consumption, reduction of emissions of carbon dioxide (CO2) and other greenhouse gases, predominantly, in Ukraine. Typical projects in this area are the projects for heat supply, water supply and water disposal, solid waste management, insulation or energy efficiency in public buildings and private housing.

On 26 November, 2009, the Constituent Assembly meeting of Investors was held inStockholm.

On 10 November, 2010, the Board of Directors of the EBRD adopted the Rules of the E5R Fund, which made possible the official commencement of activities. The E5R Fund Manager is EBRD, which provides administrative support to the activities of the Fund.

The Contribution Agreement between Ukraine and the European Bank for Reconstruction and Development on Ukraine’s participation in the Eastern Europe Partnership for Energy Efficiency and the Environment Fund was ratified on 6 July, 2011. The agreement provides for Ukraine’s contribution of 10 million euros to the Fund, to be paid annually for 5 years in instalments of 2 million euros. During 2011-2013, Ukraine has made three payments amounting to 6 million euros.

At the beginning of 2014, the Fund contributors are 12 countries and organisations which have expressed their intention to participate in the Fund by making contributions. These include:

As of 1 March, 2014, the contributors announced the allocation of 92.5 million euros, of which 89.2 million has already been paid. 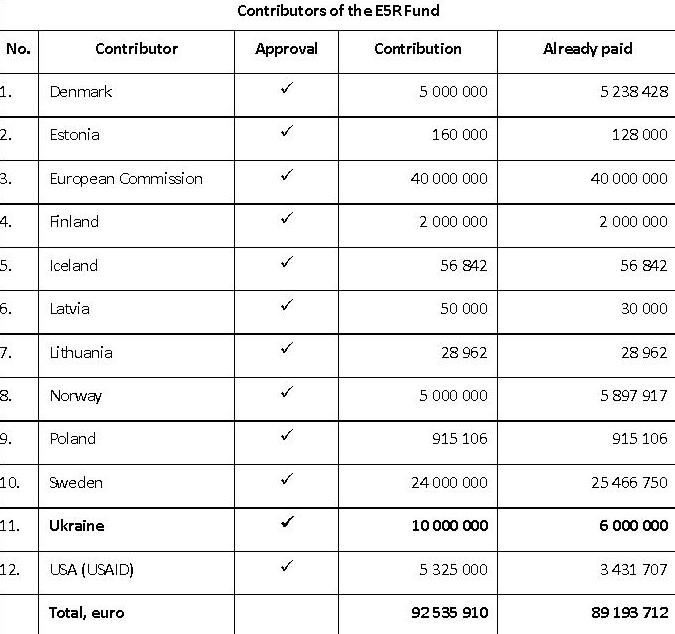 By decision of the Assembly of Contributors of the E5R Fund, 1 grant project and 15 energy efficiency investment projects in the sphere of development, renewal and modernisation of heat and water supply in Nikolaev, Zhytomyr, Rovno, Ternopol, Lvov, Dnepropetrovsk, Zaporozhye, Kamenetz-Podolsk, Ivano-Frankovsk, Alexandria, Krivoy Rog, Vinnitsa, Poltava, Severodonetsk, Lugansk, Donetsk and Kiev have been approved. The total estimated project cost is 234,915,000 euros, of which the MFI loans amount to – 146,2 million euros, while technical assistance grants, which will be provided from the E5R Fund, total  51,01 million euros (in the ratio of: 2.8 euros of the loan to 1 euro of the grant).

Based on the results of six meetings of the Coordinating Group of the E5R Fund, the Ukrainian side, jointly with the MFI, presented, while the participants of the meeting – heard and discussed, a number of new investment projects in the cities of Lutsk, Krivoy Rog, Kiev, Starokonstantinov, Poltava, Alexandria, Cherkassy, Shelkino, Vinnytsia and Donetsk Provinces, totalling over 277 million euros (the amount of grants – approx. 65 million. euros).

The implementation of these projects will improve the quality of public services of heat and water supply, significantly increase the level of energy savings by reducing the volume of consumption of energy by utility service organisations, which are financed by the state and local budgets, and will facilitate the transition to the use of renewable and alternative energy sources.