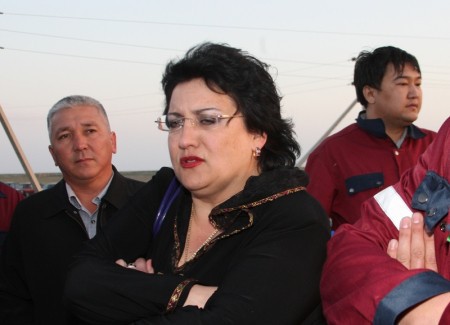 Natalia Sokolova received a special gift for the 8th of March – she finally returned home.

The fact that Natalia is really at home now, was announced to me by her personally. As you are aware, the Open Dialog Foundation has been monitoring the situation in Mangistau since the 11th of May, 2011. We have repeatedly raised the issue of the ex-lawyer of striking oil workers during meetings and discussions organised by the OSCE, the European Parliament, the European Commission and other institutions. Therefore, it is essential for us to hear it from Natalia herself that she is at home at last.

Unfortunately, Sokolova was extremely brief because the preventive measure which was applied toward her prohibits to give any comments on what happened or what is happening. According to Article 63, section 5.1 of the Criminal Code of the Republic of Kazakhstan she is bound by severe restrictions on freedom: she cannot leave her house or her workplace from 10.00 p.m. to 6.00 a.m., she cannot leave the town or participate in any public events or discussions; she cannot even be in places of mass gatherings of people.

According to Natalia’s words, on the 7th of March, 2012, she was released from the UT-157/II prison in Atyrau. The term of 6 years’ imprisonment was changed by the decision of the Supreme Court of the RK issued on the 6th of March, 2012, to three years’ incarceration as a suspended sentence with 2 years’ probation; she is also forbidden to engage in social activities for 3 years. i.t. she cannot participate in the labour union movement, protect workers, as she had done before, and to join any social associations or parties.

Moreover, as we have learned, the conditional release became possible after Sokolova, the lawyer of the labour  union of the workers of the Karazhanbasmunay, signed her confession in committing the crime, i.e. she admitted that she is guilty of “inciting social discord”. Such a proposal was made to her by law enforcement authorities.

Despite the fact that earlier the Supreme Court of the RK refused to consider the case of the ex-lawyer of labour unions, the decision to change the punishment was made the Supreme Court in response to the filing of a protest to the General Prosecutor’s Office of the RK (on the 21st of February, 2012).

As soon as on the 8th of March at 8 a.m. local time, Natalia Sokolova came home by train from the city of Atyrau.

On my part, I consider it necessary to note that the change of the punishment for Natalia Sokolova cannot be regarded as her liberation, because in fact, she cannot continue her human rights and social activities, she cannot even meet with her colleagues- oil workers.

In addition, judging by the situation, the alteration of the sentence by the decision of the Supreme Court as a result of signing the confession in ‘inciting social discord’ by Sokolova, in fact, brought Kazakhstan back to the Stalin era;  in 1937 Soviet authorities also forced dissidents and otherwise minded  to sign confessions by brutal torture and unlegitimately long terms of imprisonment. Obviously, for the Supreme Court of Kazakhstan it does not matter that the offense has not changed, but it is important that the ex-lawyer oil took the blame.

Thus, the precedent was created and Kazakh authorities will use the same scenario of reprisals against other dissidents.

There are reasons to believe that the interest of the international community, in particular the repeated statements made by the representatives of the European civil society and EU officials have largely determined Natalia’s fate. Kazakhstan is diversifying its foreign and economic policies, choosing to keep close contact not only with China and Russia, but also with Europe, which, apart from investments, also provides Kazakhstan with the image of the leader in Central Asia.

It is obvious that the release of Sokolova may be perceived as a symbolic step in the improvement of relations between Europe and Kazakhstan, especially before the adoption of the resolution of all factions of the European Parliament and the debate over Kazakhstan in Strasbourg with EU High Representative Catherine Ashton.

Still, I believe that this realease will be used as a positive example during the promotion of the new agreement on cooperation between the EU and Kazakhstan, but it should be noted that we should not overestimate this step.

We will continue to monitor the human rights situation in the RK and to inform the international public about the progress on the fulfillment of the promises made by the authorities in Kazakhstan to European MPs and commissioners.

More on this topic:
Natalia Sokolova