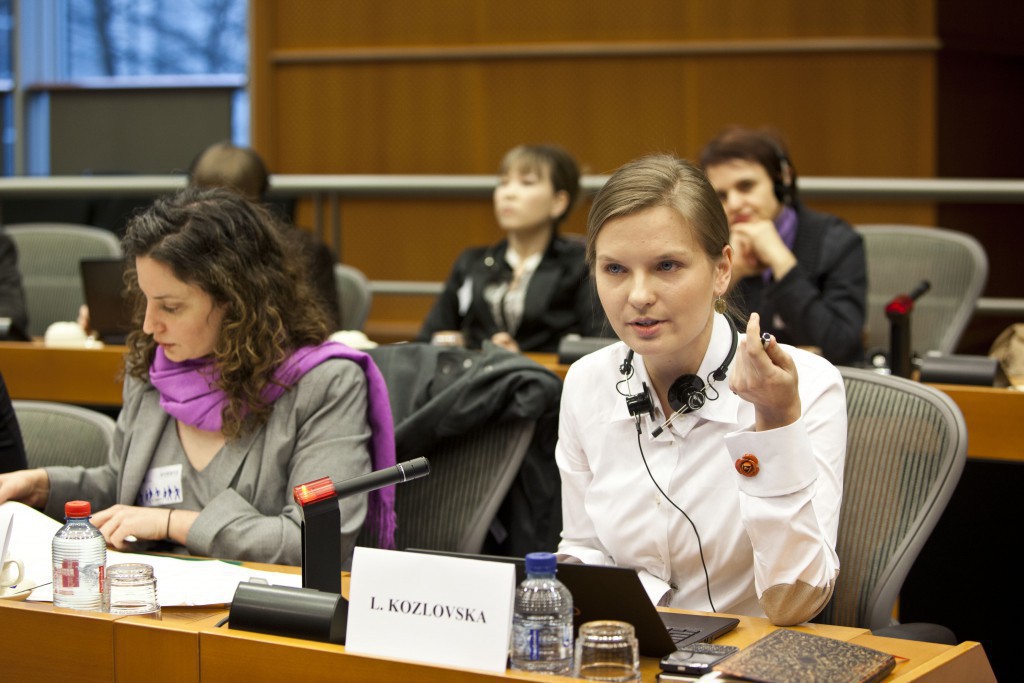 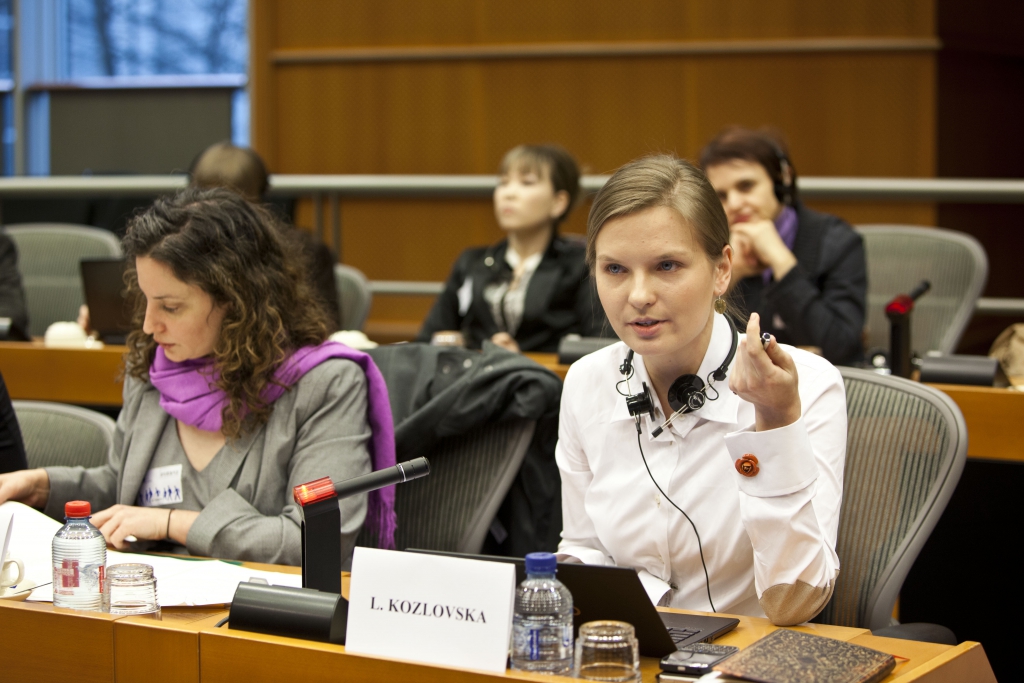 Due to the fact that yesterday after 40 minutes of waiting, neither I nor any of the guests from Kazakhstan who were present in the room, namely: Alia Turusbekova, the wife of Vladimir Kozlov, the arrested leader of the ‘Alga’ party, and Oksana Makushina, the Editor-in-Chief of the ‘Respublika” newspaper, were able to meet with Mr. Bartolozzi, we decided that I will ask the questions on their behalf, here in this room today.

1. a question from Alia Turusbekova – the wife of the arrested Kozlov:

On the 31st of January, 2012, after the meeting of the delegation for Central Asia in the European Parliament, representatives of the civil society of Kazakhstan reported that for reasons unknown to any of the relatives or lawyers, Kozlov‘s health has deteriorated to the point, where surgery is needed, according to prison doctors. Until now, Kozlov has been completely isolated and he was denied the right to be visited by members of his family. Mr. Chairman of the delegation for relations between Central Asia and the EU, you stated that you are monitoring the situation and you are in a constant contact with the Kazakh embassy, you also mentioned that you made a formal request. Did you receive an answer? What other steps have you taken?

In the presence of MEPs, the Kazakh authorities promised that the investigation into the tragedy in Zhanaozen would be objective, open and would take into account all the circumstances surrounding it. In this regard, how do you assess the statement of the Kazakh General Prosecutor’s Office made on the 22nd of February, 2012, about its intention to punish, by means of criminal prosecution, the people who give information about these events to the press and to the journalists who write about this subject?

3. a question from Oksana Makushina, the Editor-in-Chief of the ‘Respublika’ newspaper for Kazakhstan:

Do you consider the situation normal for Kazakhstan? A country which declares its commitment to democratic principles, while groups of editors of independent media are ordered to report for 6-8-hour long interrogations conducted by special forces, and while at the same time exerting pressure and intimidating journalists? Is it normal that people are punished with a term of up to 7 years just for expressing their opinions, as happened with Igor Vinyavskiy, the editor of the ‘Vzglyad’ and now the same may very well happen to me, because during the press-conference I and my colleagues showed the same leaflet for which Igor is currently incarcerated?

Our attention was drawn to the Republic of Kazakhstan by the dangerous accumulation of disturbing factors which have influenced its domestic situation for the last few months, namely:

1. The brutal pacification of the peaceful strike of employees of the oil and gas sector on the 16th of December, 2011, in the town of Zhanaozen, in the Mangistau region of western Kazakhstan, which led to the deaths of at least 16 people. Until recently, a state of emergency was in force in Zhanaozen, and the families, as well as real and alleged supporters of the striking workers, are still being subjected to oppression.

2. Controversial changes to the legislation of Kazakhstan: ‘On national security of the RK’, ‘On broadcasting’, ‘On religion’.

3. An early parliamentary election held on the 15th of January, 2012, recognised by the OSCE as not meeting democratic standards.

4. The increase in persecution aimed at independent media and members of the opposition. On the 23rd of January, 2012, the editor of the ‘Vzglyad’ newspaper and 15 ‘Alga’ party activists were detained in connection with their involvement in clarifying the reasons and the course of the tragic events in Zhanaozen. Vladmir Kozlov, the leader of the party, and an activist Serik Sapargali are currently facing the threat of up to 12 years’ imprisonment on charges of ‘inciting social discord’. No family members have been allowed to visit Vladimir Kozlov and he now a faces serious health condition, however, the urgent surgery that he needs has not yet been done, which is one of the most common forms of torture in Kazakhstan.

Therefore, we consider it appropriate to take the following steps:

1. To establish an international commission to thoroughly investigate the events in Zhanaozen;

2. To provide medical surveillance and urgent assistance for Vladimir Kozlov in scheduling and carrying out his surgery;

3. To examine the compliance with international standards of the ‘extraordinary acts’ adopted by the Kazakh authorities, primarily ‘On national security of the RK’, ‘Оn broadcasting’ and their application of the law in order to restrain the political and civil rights of Kazakhs;

4. To immediately direct the EU funds, initially allocated for the strengthening of cooperation with Kazakhstan and its development, to the organisation of humanitarian aid for the people of Zhanaozen and the Mangistau region, to the provision of psychological assistance for the families of the deceased, arrested and imprisoned, and to the establishment of the mission of international observers which would be sent to the region in which the state of emergency was imposed;

5. Exerting diplomatic pressure on the government of Kazakhstan in order to ensure transparency and fair course of the trials of the imprisoned representatives of striking workers, independent journalists and activists of opposition parties, and to end politically motivated persecution of independent and opposition circles;

6. engaging in further negotiations on the conclusion of a new agreement on enhancing cooperation in the coming years, conducted between the European Union and the Government of the Republic of Kazakhstan, under the condition that Kazakhstan complies with the international law, in particular the International Covenant on Civil and Political Rights and commitments declared and assumed by this country in relation to taking over the OSCE Presidency in 2010; To provide diplomatic support for the above actions.

In connection with the activities, currently carried out by the National Security Committee, based on the statements of the General Prosecutor’s Office of the Republic of Kazakhstan, the oppression associated with the publishing of information regarding the tragedy in Zhanaozen is feared to be continued. At a press conference on the 22nd of February, 2012, the General Prosecutor’s Office of the RK made a formal statement, regarding the prohibition of spreading misinformation about the events in Zhanaozen on the 16th-17th of December, 2011, in Zhanaozen and on the current situation in the region. They also mentioned the media which were allegedly involved in such activity, namely: the Russian edition of ‘Novaya Gazeta’ and the Kazakh newspaper ‘Golos Respubliki’. At the same time, the General Prosecutor’s Office of the RK reinforced its request to the media to base their reports solely on proven facts and to prevent the publication of false information by threatening journalists and their sources as well as commentators with criminal prosecution.

These statements stand in sharp contrast to the assurances of full openness and willingness to work with independent communities and international experts on clarification of the Zhanaozen events, made by the representatives of the authorities to MEP Piotr Borys, who paid an official visit to the country almost during the same period, i.e. between the 20th and the 22th of February, 2012.