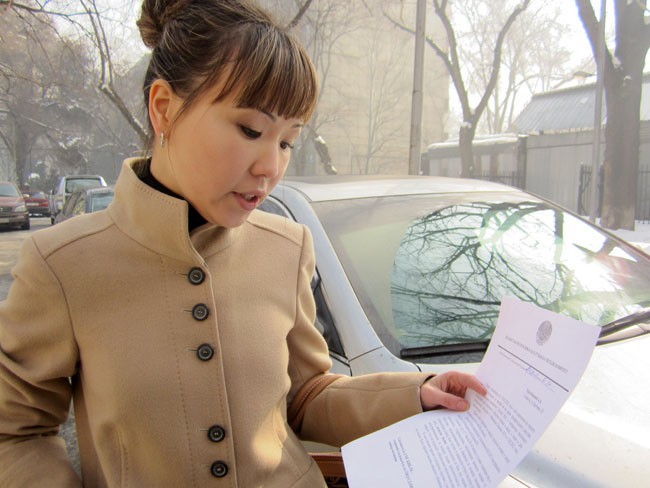 12.03.2012. Alia Turusbekova was denied the right to visit her husband for the fifth time

On the 12th of March 2012, Alia Turusbekova, Vladimir Kozlov’s wife, wrote another petition, the fifth in a row, requesting a meeting with her detained spouse. According to her words, there is very little chance of receiving a positive response to this request as law enforcement workers violate the law and make their decisions by exercising their own discretion and/or judgement. Alia Turusbekova draws attention to the fact that no refusals to visit her husband have been given to her in writing. On the 7th of March, she was refused the right to see her husband on the grounds that she had already seen him. It is worth noting that in Article 17 of the Law of the RK ‘On procedure and conditions of detention of persons in institutions that provide temporary isolation from society’ there is no mention of a denial of a visit for the reason given.
Alia Turusbekova expresses her concern about her husband’s state of health. According to her, during a meeting with a lawyer, Vladimir Kozlov looked ill and emaciated, which may be as a result of malnutrition and torture.

12.03.2012. An activist of the ‘Alga!’ party in Zhanaozen is concerned about the attention of the police

Yerlan Kaliyev, an activist of the ‘Alga!’ party, who arrived in Zhanaozen on the 11th of March, 2012 with the aim to reconstruct the chronology of the events of 15th-17th of December 2011, in the framework of the international committee ‘Zhanaozen-2011’, expressed his concern regarding the visit of the police officers in the apartment where he temporarily resides.
On the 12th of March, 2012, Yerlan Kaliyev went to a meeting with the Minister of Oil and Gas of the Republic of Kazakhstan and representatives of the General Prosecutor’s Office, organised by local authorities. At that time, two men in police uniforms knocked at the door of the apartment which Kaliev rented. An activist  and local resident was present. In response to a question about the reason for the visit, they stated that it was in order to verify passports. Yerlan Kaliyev arrived (according to his version of events, it took him no more than 10 minutes) along with the ‘Stan-TV’ crew. Yerlan Kaliyev’s his suspicions were raised when he returned to the apartment to confirm his identity and discovered that the policemen had left.