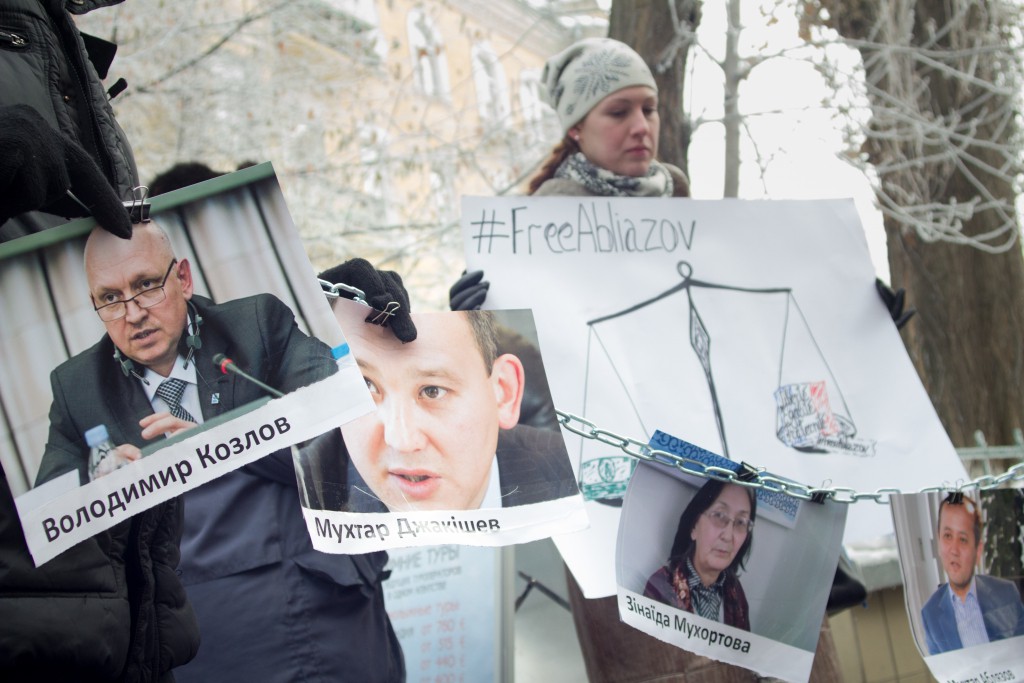 At 11 a.m. on 5th December human rights activists of the Open Dialog Foundation protested in front of the French embassy in Ukraine. In a joint statement signed by the representatives of the Open Dialog Foundation, the Centre for Civic Liberties and Centre for Human Rights Information, the activists called on the President of France to cease his assistance in the campaign against democracy being conducted by Nursultan Nazarbayev.

On December 5th and 6th, Francois Hollande will be in Kazakhstan on a working visit.

The chain of banners stretched across the site featured portraits of political prisoners of the regime: opposition politician and dissident; Mukhtar Ablyazov, co-founder of the “Kazakhstan Democratic Choice” party; Mukhtar Dzhakishev; “Alga!” party leader; Vladimir Kozlov, human rights activists; Vadim Kuramshin and Zinaida Mukhortova, poet; Arona Atabek. This was how the event organizers wanted to draw public attention to the fate of the opposition in Kazakhstan. All of its members are persecuted for their struggle for democratic transformation, and now – upon a request from Ukraine or Russia – Mukhtar Ablyazov may be extradited from France. Should this happen, he may suffer torture or ultimately, even death.

In their open letter, the activists plead with Hollande to prevent Mukhtar Ablyazov’s extradition, to raise the issue of human rights in Kazakhstan and stop supporting the dictatorial regimes of Kazakhstan and Russia. The human rights activists’ letter was delivered to Julie Fort, the first secretary of the French embassy in Ukraine.

Hollande’s visit to Kazakhstan will take place just prior to the anniversary of the bloody suppression of the Zhanaozen public gathering in 2011. As the protesters said: “the leader of the European country should not trade the values for which the French shed blood, in return for temporal benefits of cooperation with a dictator” – the statement reads.

French cooperation with the dictatorial regimes of Kazakhstan and Russia is a threat to Ukraine as well. “The request for Ablyazov’s extradition was submitted during the reign of Yanukovych, and was purely political in its nature. Today, as Ukraine has not yet vetted the prosecutors’ offices, reformed the law enforcement structure or punished the ones responsible for the deaths of Maidan activists, this extradition of an opposition member is inadmissible” – the Open Dialog Foundation claims.

Previously, the Foundation protested against France’s intention to sell ‘Mistral’ assault ships to Russia. Kiev and Warsaw have seen happenings during which participants displayed images of ships sent by France to the ‘aggressor country’; the ships were covered in blood.