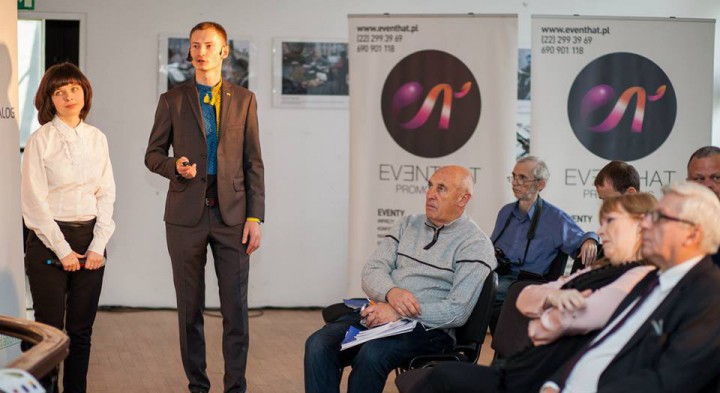 Debate: Will EuroMaidan mirror the failure of the Orange Revolution?

As part of the celebration marking the first anniversary of the beginning of EuroMaidan – the pro-European voice of the people, which has gone down in the history of Ukraine as the Revolution of Dignity, we debated the question as to whether Maidan is going to mirror the errors of the Orange Revolution.

The invited guests tried to answer the question whether the Maidan as a movement is doomed to fail. Among the speakers were: Andrei Illarionov, former economic adviser to Putin and his personal representative in relations with the countries of the G7, now a staunch critic of the regime and associated with US think tank CATO Institute; Ruslana Lyzhychko, a singer and unofficial global ambasador of EuroMaidan; Volodymyr Parasiuk, Sotnik (commander in Sotnia), who is said to have “changed the course of history”, and Lyudmyla Kozlovska, President of the Open Dialog Foundation. The meeting was opened by Andriy Deshchytsa, the Ambassador of Ukraine to Poland. The debate was moderated by Michał Kacewicz from Newsweek Poland.

Andrei Illarionov spoke about how the Russians followed the outbreak and the course of the protests in Ukraine. In Moscow, 50,000 people took to the streets twice, protesting against the war, while in counterdemonstrations, organised by the authorities, only a few thousand demonstrators participated. Also, 15 committees of solidarity with Maidan are active in Russia. According to Illarionov, Putin fears the Europeanisation of Ukraine, which could intensify demands for change in Russia itself. According to a former adviser to Putin – a forcible solution to the problem was considered in the Kremlin as early as in 2004-2005. A demonstration of the adoption of the new direction was even evidenced in the President’s official statements – instead of ‘in Ukraine’, Putin began to say ‘in the Ukraine’, which is tantamount to recognition of Ukraine as a territory, not a country. Illarionov also compared the speech of President of the Russian Federation on the defence of the Russian-speaking population to one made by Hitler in 1938. It is not Putin, but the West which has lost touch with reality, ignoring the aggressor, – he stated. He also objected to reference to the conflict as a ‘second cold war’. The conflict, which entailed a change of borders and resulted in thousands of deaths is an example of a ‘hot’ war, – he argued. Illarionov also called for increased fortitude in dealing with Russia, as the defeat of Ukraine will serve as an invitation to carry out further assaults.

Ruslana spoke about thefaith which Ukrainians had placedinYushchenkoand Tymoshenko, and for this reason, in 2004they returnedto their homes.Today, they are not going to repeat the same mistake andwill keep a close eye on the authorities. Maidanwas bornout of a protestagainstcorruption and an expression ofpeople’s willto join therealm ofEuropean values. The singerstated that currently, the Verkhovna Radaof Ukraine includes only 10% ofMPs who participated as Maidan activists, and she claimed that in the next term there would be even more Maidan supporters, around 50%.

Volodymyr Parasiuk considers the abbreviation ‘ATO’ (anti-terrorist operation) as a euphemism; ‘ATO is a war’, he stated. Parasiuk is currently a member of the Verkhovna Rada but also a soldier of the ‘Aidar’ battalion. In his opinion, Ukrainian enthusiasm cannot be denied, but they suffer from a shortage of military equipment. Ukraine surrendered its entire arsenal in exchange for guarantees from the US and the UK; still, the guarantees have proven to exist only on paper – Poland enjoys European privileges, its society gains education, while in Ukraine, we have people who have only basic instincts: to eat, sleep and survive – he stated.

President of the Open Dialog Foundation, LyudmylaKozlovska, who also fulfills the duties of a member of the Lustration Council at the Minister of Justiceof Ukraine, tookpart in the discussionas well. As she claims, Yanukovych’sescapedoes not resolvethe problem ofa flawed system- Yanukovychleft, but the systemremains unchanged. She also labelled the judiciaryin Ukraine ‘a business concern’. Mrs. Kozlovskaalso stressed the needto implementthe lustration law, even thoughthe act itselfneedssome improvements.

The entiredebatecan be seen here.