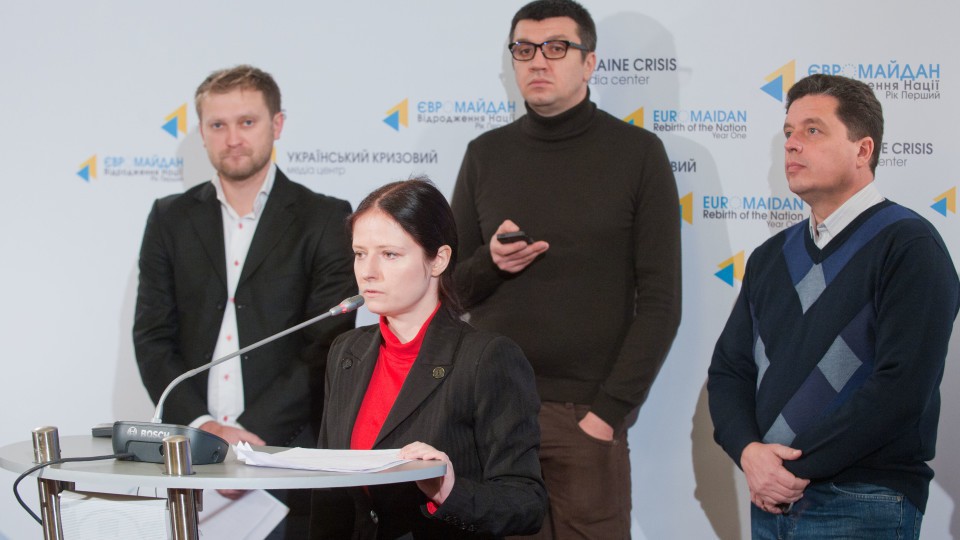 A briefing on the ‘lustration law’: a critique and prospects’

Today at 2:00 p.m., the Open Dialog Foundation presented the report A summary on the development of the law on lustration No. 4359 ‘On lustration of the state authorities’ in the Ukraine Crisis Media Centre.

The report contains recommendations by experts from the Czech Republic, France, Poland and other countries with respect to the compliance of the law with the requirements of European legislation. The report was presented by an expert of the Open Dialog Foundation, Agnieszka Piasecka, the project coordinator for the support of lustration and justice reform in Ukraine.

Comments on the remarks of foreign experts were voiced by representatives of the Civil Lustration Committee and members of the Civil Council on Lustration at the Ministry of Justice of Ukraine, Maxim Mankovsky and Sergey Ivanov. Alexander Kulikovskii, an assistant of Oleg Osuhovski, a member of Parliament of Ukraine of the 7th and 8th convocation, and the deputy chairman of the ‘Lustration’ civil organisation also took the floor. Their speeches were based around the topics of practical experience, Ukrainian realities and a comparison of European and Ukrainian experience.

Representatives of the lustration committee promised that they would distribute the report, prepared by the Open Dialog Foundation, among activists in the regions, as it is very pertinently sums up the entire body of work on the process of lustration.

The main observations of European experts who worked on the report, refer to the collective nature of the responsibility in the process of lustration, which is contrary to the guidelines of Resolution 1096, as well as the decentralised nature of the procedure itself, making it difficult to properly control it.

“We believe that the establishment of an independent institution which would deal with lustration, would be more than appropriate. The decentralised nature of lustration entails the risks of uncontrollability. Elective offices should also be subject to lustration, and the responsibility of judges should only be individual. Any terminological inaccuracies in the draft of the law should be clarified. When developing a new law, it is necessary to anticipate all possible conflicts with other laws”- Agnieszka Piasecka commented.

“We very much appreciate the comments and suggestions of our European friends, however, unfortunately, Ukraine has not changed. Mature democracy is inherent to Europe, as it has strived to achieve it over many years. Still, we live in a different reality, and we have only embarked on this path now. There are citizens who are against the law and lustration. They want the old system to remain, yet the new law completely eliminates the old one. These people have filed an appeal with the Venice Commission. We are looking forward to the conclusions in order to analyse them in detail,”– Maxim Mankovskiy stated.

“The law which was adopted requires certain changes. It does not meet our expectations in terms of the lustration process. The draft, filed by the ‘Svoboda’ [‘Freedom’] party in March, has been criticised for its radicality. Our law provided for such measures as the verification of candidates for Membership of Parliament. It would not allow representatives of the opposition bloc to get back into the Rada. And now, Mr. Kivalov, who could be subjected to lustration, personally intervenes to ‘torpedo’ the law. Therefore, we will require tougher lustration”, – Alexander Kulikovskiy enunciated.

“Our Western colleagues make constructive comments: for example, to extend the period of time for the verification of persons subject to lustration, to 6 months. But I think it’s impossible: over half a year, one can be ‘reborn’ in our country. Therefore, I’ve been advocating making the law more stringent, because Ukrainian opponents of lustration do not put forward any meaningful arguments; they are even confused about the terms. In fact, there is a full-scale sabotage of the law on lustration of the state authorities. This sabotage is inspired by people who personify the Yanukovych regime”, – Sergey Ivanov commented.