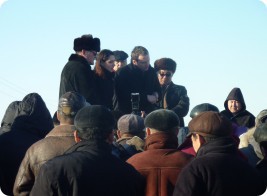 MEP Piotr Borys, who visited Zhanaozen, stated that the town’s residents are afraid to speak openly. The General Prosecutor’s Office of Kazakhstan warned journalists of the criminal responsibility for publishing false information about the Zhanaozen events.

“Information about the mass disappearance of people in Zhanaozen, spread by some media sources, is not true”, Nurdaulet Suindikov, a representative of the General Prosecutor’s Office, said on Wednesday, the 22th of February.

– Also, the articles about  the mass disappearance of people and about announcements regarding the missing  relatives hanging all around the town are not true – he said during a press-briefing in Astana.
According to Nurdaulet Suindikov, one of the three persons who disappeared during the days of the events in Zhanaozen was found dead in the basement of one of the houses, the second one was found alive, and a third one is still being searched for by the police.

For nearly two and a half months after the events (mass riots and deaths in Zhanaozen – The ‘Azattyk’ Radio) only three names of alleged victims of the unrest that do not appear in the official list of the  General Prosecutor’s Office were specified. These were: Dzhanbulat Tangiyev, Yusup Andamasov and Dzhalgasbay Uzakbaev. The first one was found alive and well and did not participate in the riots, and the information about Andamasov’s death and Uzakbaev’s disappearance was not witheld by anyone and it was registered officially in the law enforcement agencies – said Nurdaulet Suindikov.

THE GENERAL PROSECUTOR’S OFFICE IS WARNING

According to the General Prosecutor’s Office, a statement about the disappearance of Dzhalgasbay Uzakbaev was filed with the police on the 22th of December, 2011, and on the basis of the statement investigative work was initiated. It is reported that until now, the searches of Uzakbaev have yielded no results.

The representative of the General Prosecutor’s Office also denied some of the data published in the press, about the victims of the tragic events in Zhanaozen:

In the ‘Novaya Gazeta’ it was reported that on the 16th of December,  22 people died in the presence of the surgeon, that one more person died on the 17th, and on the 19th of December, a girl raped by the riot policemen was delivered to the hospital. However, in the surgical department of the central hospital of the town of Zhanaozen no female doctor has ever worked or is presently working in the capacity of surgeon-resuscitator. Futhermore, this position does not even exist in the hospital.

The General Prosecutor’s Office denied the information published on the website publicpost.ru in the article ‘The Zhanaozen inhabitants relayed their version of the massacres in Zhanaozen‘. In the article it was reported that in the morgue of Zhanaozen there are still some bodies of children that were not claimed by relatives, allegedly bodies of pupils of the local orphanage.
Nurdaulet Suindikov, a representative of the General Prosecutor’s Office reiterrated that that journalists are going to bear responsibility for publishing false information:
– First of all we are talking about administrative responsibility for knowingly giving false information to the media, according to Article 347 of the Code of Administrative Offences of the Republic of Kazakhstan.

A FEAR OF FORMALISM

The member of the European Parliament also met with the residents of Zhanaozen:
– We had meetings with relatives of the wounded, of the missing and of those who suffered as a result of the Zhanaozen events. They said that they are afraid to speak openly about their problems, about the way that the investigation is being conducted, because persecution is going on. And still, the prosecutor’s office assured us that everyone can make statements openly and not be afraid to come forward, if one has any information. Meetings with residents of Zhanaozen were very emotional, full of tears and bitterness. They asked us to convey their problems to the international community.
As reported by Piotr Borys, after his return to Europe, an official note will be sent to the Government of Kazakhstan with a demand that investigation of the events in the Mangistau Province be objective.

– Europe is closely following the situation in Kazakhstan after the Zhanaozen tragedy, because we are afraid that the investigation could be just a formality. We are concerned about the fate of opposition activists, namely: Kozlov, Amirova, Vinyavskiy, who are being held in custody. Their cases will be also taken under special control by us. A special speech on the results of the trip will be delivered in the European Parliament – says Piotr Borys.

On the 16th of December, 2011, in Zhanaozen and on the 17th of December at the Shetpe station of the Mangistau Province unrest occured, and as a result of its suppression, at least 17 people were killed and approx. 100 were injured. Opposition and civic activists claim that there were many more victims of the tragedy.

Upon his return from Zhanaozen to Almaty on the 22nd of February, Piotr Borys, MEP, told the ‘Azattyk’ Radio station of his impressions from the December tragedy and its investigation.