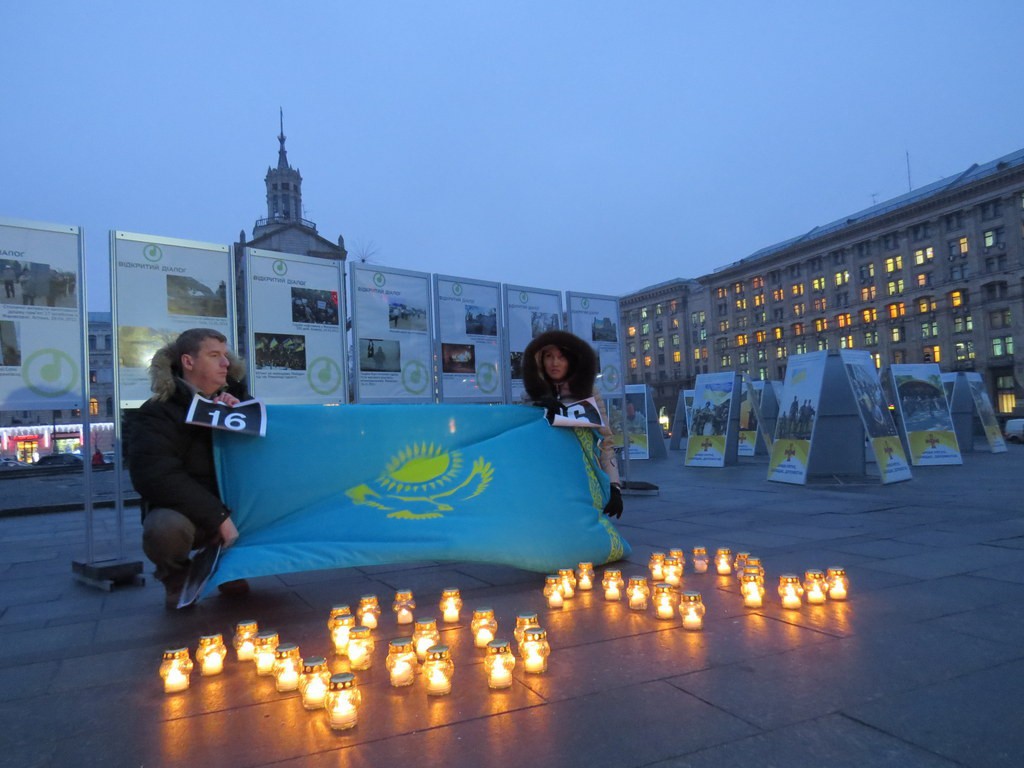 The opening of the photo exhibition ‘Zhanaozen – Maidan: The chronicle of protests, suppressed by shooting’

In Kiev, a photo exhibition was opened to mark the anniversary of the shootings at the peaceful protest in the city of Zhanaozen, Kazakhstan. The exhibition will be open from 12 December, 2014 to 21 December, 2014.

The Open Dialog Foundation, as the organiser, called for solidarity with the Kazakh people in their struggle for freedom. Kazakh and Belarusian opposition activists also delivered speeches at the opening ceremony.

Photos from the exhibition depict events both in Zhanaozen in 2011 and at the Independence Square in 2013. Organisers drew a parallel between the violent suppression of both protests, the purpose of them being a struggle for freedom. Icing lamps are arranged to form an inscription ‘16.12’, the date of Kazakhstan’s Independence Day and also the date that peaceful protesters were gunned down.

“Our action is a sign of solidarity. Our nations have a common goal – a struggle for freedom. Cooperation between non-democratic regimes in the former Soviet Union is now amassing impressive weight, and Ukraine is no exception. We hereby call on the Ukrainian authorities to take the democratic path and cease their cooperation with authoritarian regimes. Our photo exhibition features images from the protests in Zhanaozen in 2011 and Maidan in 2013. By drawing such a parallel, we are once again emphasising the fact that all non-democratic regimes try to hold on to power at all costs, even if the price is hundreds of lives”– the organisers commented.

“Nazarbayev has fired shots during a peaceful rally in Zhanaozen. 17 people were killed and 108 were wounded, while dozens were arrested. That’s the way he treated the people who had taken to the streets in order to participate in peaceful protests; the people who strived for a pay increase and for observance of their rights. Any attempt to peacefully protect one’s rights in Kazakhstan is prosecuted. During Nazarbayev’s dictatorship, numerous people were killed. The regime persecutes all those who think differently and want changes in the country. Despite the fact that our cultures are so different, over many years of cooperation, the Ukrainian and Kazakh nations have become similar in many aspects. The whole world is now looking at Ukraine, at Maidan, to see what changes will come about; Kazakhstan also looks on. The Kazakh opposition is preparing a change in the country. And God willing, we will win. Kazakhstan will have its own Maidan and its own democracy”, – Aidos Sadykov, Kazakh journalist and opposition activist, enunciated at the opening ceremony.

Organisers of the rally also drew attention to the death of 24-year-old Asem Kenzhebayeva who was subjected to torture in a detention centre in Zhanaozen in December 2011. Subsequently, she suffered serious health problems and on 13 December, 2014, she died, leaving behind her five year old son. They also reminded those gathered of the fate of opposition activists and politicians who are still behind bars. Fortunately, yielding to pressure from the international community, the Kazakh authorities recently released labour union activist Roza Tuletayeva and human rights defender Zinaida Mukhortova from detention.

On 16 December, 2011 in the Kazakh town of Zhanaozen and the village of Shetpe, police suppressed a peaceful protest of oil workers, which had been ongoing for approx. seven months, by opening fire on protesters. According to official figures, at least 17 people were killed and 108 were wounded. Independent sources cite much higher figures.

Subsequently, the protesters were subjected to oppression: torture during interrogations in order to compel witnesses to give false testimonies, disproportionate court sentences. Protesters, who publicly reported the use of torture, are still serving long-term prison sentences. Police officers who opened fire on activists and residents are already at large – they were released early. The use of punitive psychiatry against opposition activists is widely practiced. Kazakhstan’s only and incumbent president, Nursultan Nazarbayev, is doing everything in his power to protect his dictatorship from public discontent and social fluctuations.

The couple Aidos and Natalia Sadykov suffered persecution in their home country for many years due to their journalistic activities. They were forced to leave Kazakhstan as Natalia faced imprisonment for defamation. The real reason which prompted the opening of the criminal case against Natalia Sadykova was her professional activities and the activities of her husband Aidos. Kazakh authorities have instituted several criminal cases against Aidos Sadykov, subjected him to forced psychiatric treatment and imprisoned him for nearly two years, having convicted him on charges which human rights activists deemed to be politically motivated.