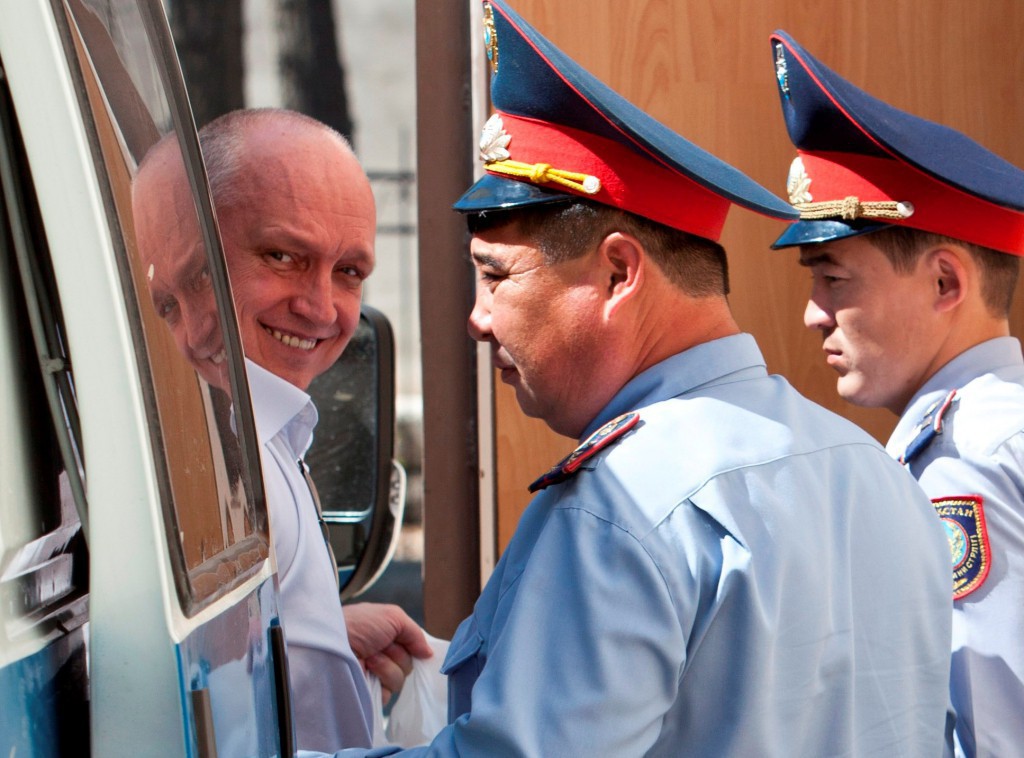 Soviet penal colony management methods: by lying, they report that Kozlov is a threat to inmates

From Kozlov’s  evaluation, written by the head of the colony, in which the dissident is serving his time, it follows that he poses a threat to other inmates. The evaluation, which does not correspond to the truth, was used as an argument for the refusal to change the conditions of his imprisonment. The colony administration applies the worst of the methods used by the Soviet prison system in the bygone era. At the same time, the world has not forgotten about the imprisoned dissident; Madeleine Albright explicitly labeled his trial a ‘step in the wrong direction‘.

On 8 December, 2014, the Kapshagay Court dismissed the appeal filed by Kozlov. The oppositionist appealed against the sanction imposed on him for staying in the unit to which he had not been allocated. Previously, on 5 August, 2014, Kozlov was denied a transfer to a colony with a less stringent regime. In accordance with Article 73 of the Criminal Executive Code of the RK, a person sentenced to imprisonment may be transferred to another place of detention after serving 1/3rd of their sentence, depending on their behaviour and attitude towards work in the colony. On 23 July, 2014, exactly two and a half years had passed since Kozlov was imprisoned, which entitled him to apply for a transfer to a semi-open colony, with a less strict regime where family visits are permitted. However,  Kozlov’s request was rejected, and the decision was justified by four admonitions of which the oppositionist had not been aware. According to human rights defenders and people close to the leader of the Alga! party, the admonitions served as a pretext for the refusal to grant Kozlov’s request. One of the admonitions was connected with Kozlov staying in a unit to which he hadn’t been allocated  – the colony administration discovered that, according to the documents, he should have been staying in another part of the colony.  And so, Kozlov was accused of staying in the wrong part of the colony, despite the fact that no inmate is able to decide for himself where to stay. Kozlov decided to appeal against this accusation, but the court did not accede to his request and dismissed the appeal on 8 December, 2014.

Recently, Kozlov’s evaluation, written by the head of the LA 155/14 colony, Abylgazy Idilov, appeared. On its basis, the court refused to transfer the oppositionist to a colony with a less stringent regime. The evaluation claims that Kozlov has a ‘negligent attitude towards work’, ‘does not demonstrate repentance’, does not demand much from himself and does not wish to improve his education. His moral and intellectual abilities were assessed by Idilov as average. He also stated that the former leader of the Alga! party poses a threat to people around him and requires monitoring by the colony administration. In conclusion, he also stated that ‘Kozlov has failed to embark on the path of correction’. And so, once again, the administration reached for false evidence to deprive the founder of the Alga! party of the opportunity to serve the remainder of his sentence under less stringent prison conditions.

The evaluation is also a  cynical attempt to undermine the oppositionist’s credibility. Kozlov, being the head of the largest opposition party in Kazakhstan, mobilised various social groups to oppose the oppressive policy of the authorities. He was repeatedly invited to parliaments of European countries, as well as to the European Parliament, becoming an international advocate for change in Kazakhstan. His release is demanded by human rights organisations around the world. In her recent speech, Madeleine Albright highlighted the case of Kozlov as an obstacle to closer relations between the US and Kazakhstan, and labelled his trial a ‘step in the wrong direction’.

Excerpts from the evaluation which served as the grounds to refuse the change of prison conditions:

[…according to Article 102 of the CEC of the RK, he has a negative attitude. He is not aware of the risk to the public that was caused by the act committed by him, and demonstrates no repentence. He has a satisfactory attitude to the requirements of criminal and criminal executive law of the Republic of Kazakhstan. He observes the rules regarding the established regime of incarceration and the daily routine; however, he requires monitoring by the administration of the penal colony. He does not violate the rules of personal hygiene. In relation to…]

[His behaviour is appropriate. Sometimes, he demonstrates increased impulsivity or a reaction which may be dangerous to people around him. Average intellectual level.]

Vladimir Kozlov was unjustifiably denied a transfer to more lenient prison conditions, and therefore, we hereby urge you to support the demands put forward by us to the Kazakh authorities: