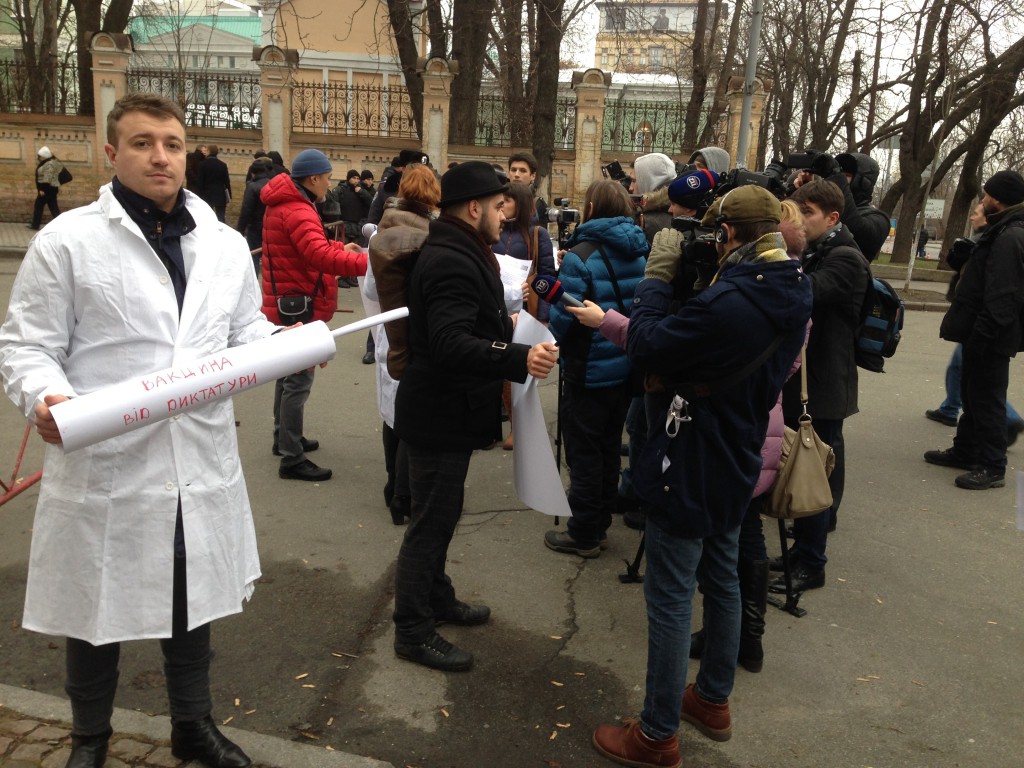 Poroshenko “vaccinated against the dictatorship virus”

On December 22, 2014, near the building of Presidential Administration, activists of the Open Dialog Foundation and members of the Kazakhstani opposition staged a political performance entitled ‘Poroshenko’s vaccination against the dictatorship virus’.

The activists dressed in white coats and holding a mock syringe, urged Poroshenko not to cooperate with the dictator, reminding him of the victims of the anti-democratic regime in Kazakhstan. According to the organisers of the performance, Nazarbayev cannot be an intermediary in the negotiations between Moscow and Kyiv. Also, among the participants of the rally were members of the Belarussian organisation Solidary Together and the Maidan international league. Since the passage to the Presidential Administration building had been blocked “in connection with official events”, the performance took place on the corner of Bankova street and Instytutska street. A representative of the administration came out to meet the demonstrators and accept a petition with signatures collected by the ODF and the Human Rights Information Centre.

‘Nazarbayev recognised the annexation of Crimea’, ‘A dictator can’t be an intermediary’, ‘Free Atabek, Kozlov, Kuramshin’ [political prisoners] – these were some of the slogans which appeared on posters.

“We have brought a symbolic syringe containing the “anti-dictatorship vaccine” to prevent Poroshenko from “catching authoritarianism”– i.e., from adopting the practices of bloodthirsty dictators. We are urging Poroshenko not to deal with such dictators as Nazarbayev and Lukashenko. Nazarbayev recognised the annexation of Crimea, and still Poroshenko thanks him for supporting Ukraine – this is unacceptable. Nazarbayev and Lukashenko are now flirting with Europe via Ukraine because they don’t want to become political outcasts like Putin. We doubt that they are really going to stand for Ukraine’s interests”, says Anastasiya Chornohorska, organiser of the performance and coordinator of ODF’s projects.

“A dictator can’t be an intermediary, he doesn’t have any principles. Nazarbayev has already been at the head of the country for 25 years. He is a bloodthirsty dictator on whose order peaceful demonstrators of Zhanaozen were gunned down three years ago; he persecutes and imprisons Kazakhstani opposition activists. His current participation in the negotiations regarding the resolution of the Donbass conflict won’t bring any positive results to Ukraine”, remarked Aydos Saydikov, a member of the Kazakhstani opposition who now lives in Ukraine as a refugee due to political persecution.

Earlier, on December 16, the ODF opened an exhibition on Maidan dedicated to the massacre of the oil workers who took part in a peaceful protest in the city of Zhanaozen, Kazakhstan.