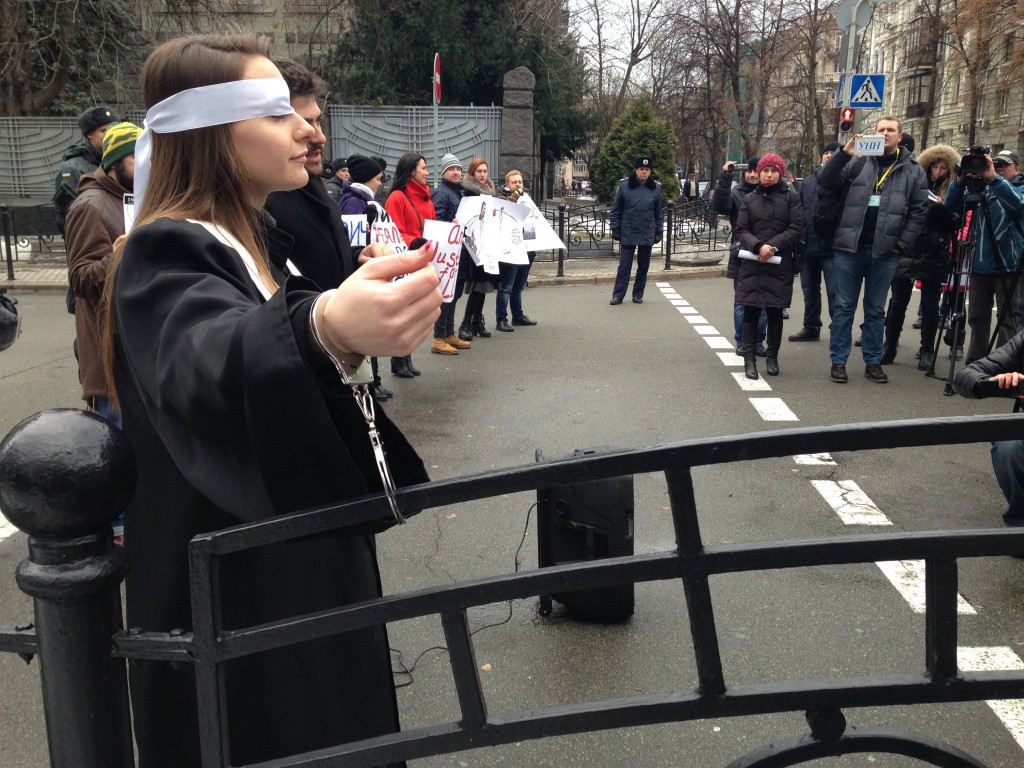 The Presidential Administration is promoting a bill on judicial system reform, which would extend the authority of President significantly. MPs have not had time to study the bill – it is scheduled for consideration for tomorrow.

In connection with this, activists of the Reanimation Package of Reforms (hereinafter referred to as RPR) picketed the Presidential Administration building. Open Dialog representatives joined the picket.

A girl dressed up as Themis was handcuffed to the fence near the Administration building. According to the organisers of the picket, this is exactly what will happen to the judicial system of Ukraine if the “presidential” bill (no. 1656) is passed. It will authorise the head of the state to eliminate courts, to transfer judges from one court to another, to sign the licences of judges appointed for the first time, and to administer the oath of the servants of Themis personally. The Parliament, however, will be empowered to promote judges to higher levels of the judiciary.

“Andriy Portnov, our political refugee, wrote to me on Facebook last night, saying that the bill had been plagiarised from his very own, that entire chapters and sections of it had been literally lifted from his bill and that 90% of the text had actually been written by him”, said Serhiy Leshchenko during the happening. According to Serhiy, on December 28, 2014 members of Verkhovna Rada did not have enough time to study 300 pages of the presidential bill, and still it was included in the agenda for the very next day.

“Bill no. 1656, filed by the Presidential Administration, protects courts from civil control, at the same time shifting all the influence over to the President. This is not a judicial system reform – this is spoofing. The Open Dialog Foundation supports judicial reform and lustration in Ukraine; we engage foreign experts, help them communicate their experience to Ukraine on its path to democratisation. The essence of this bill and the way it has been presented are reminiscent of Yanukovych’s times. The institution of judicial power has to be absolutely independent; it is the cornerstone of a law-governed state. Without judicial independence, Ukraine’s existence as a sovereign state will be impossible”, stated activists of the Open Dialog Foundation.

There is, however, an alternative to the presidential bill. RPR experts, together with the MPs of the coalition majority, have drafted Bill no. 1497. This document provides for the President and Parliament to be excluded from the process of transferring and promoting judges, while all judges’ licences are to be signed by the head of the Council of Judges of Ukraine. This bill is designed to prevent any influence being exerted on judges and stop politically motivated decisions from being taken. However, RPR’s bill has not yet been considered, while the “presidential” bill is scheduled to be considered on January 13, 2015.