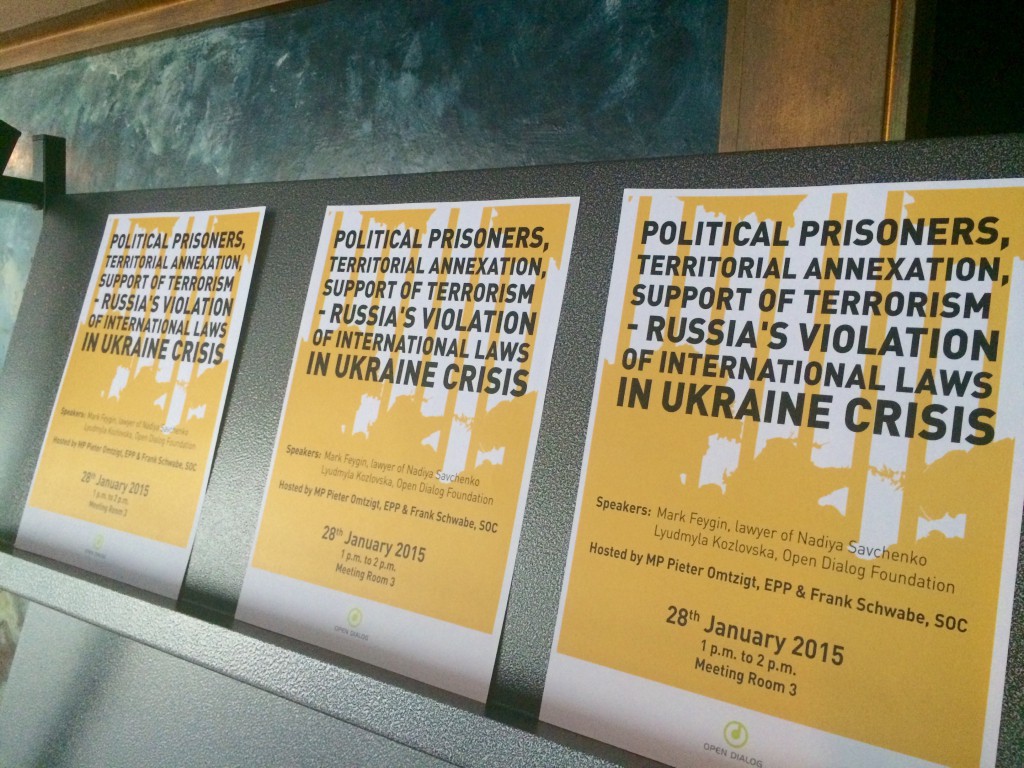 The Open Dialog delegation was present at the first session of the Parliamentary Assembly of the Council of Europe (PACE) in 2015, to draw the attention of the delegates to the numerous violations of the international law by the Russian Federation within the context of the crisis in Ukraine.

There was a lot of media attention and a lot of political tension in the corridors of the Palais de l’Europe in Strasbourg, as PACE was debating the credentials of the Russian Delegation, whose voting rights and the right to be represented in the PACE’s main bodies have been suspended since April 2014. In April 2014, PACE decided to take sanctions against the Russian delegation, following the illegal annexation of Crimea and the involvement of the Russian Federation in the war in the East of Ukraine.

Upon the invitation of the Open Dialog Foundation, Mark Feygin, lawyer of Nadiya Savchenko, came to Strasbourg to attend a series of meetings both with individual delegates, political groups, as well as the President of PACE, Mrs Anne Brasseur, and the Council of Europe’s Commissioners for Human Rights, Nils Muižnieks. The name of Nadiya Savchenko was maybe one that was most pronounced at PACE during this first-of-the-year session.

Nadiya Savchenko, Ukrainian pilot, member of the parliament and delegate to PACE, illegally kept in detention by the Russian Federation, should have been in Strasbourg with her colleagues, attending the session. Instead, she is in Moscow, barely alive as over 48 days of her hunger strike are on and counting.

Mark Feygin was in Strasbourg to explain the legal nuances of his client’s case but also to clearly call for her immediate release and for a decided and strong stand of the PACE members in support of one of their colleagues.

The media attention was high and Mark was often interviewed by international media. Amongst others, he gave an interview , along with the Open Dialog President, Lyudmyla Kozlovska, to the Council of Europe’s media services and held an over one-hour press conference on Tuesday, 27 January 2015.

During the side-event, the Open Dialog Foundation’s President, Lyudmyla Kozlovska, presented our report on Russian violations of international law and its international obligations, while Mark Feygin launched a call to the delegates to help release Nadiya Savchenko.

The side-event gathered a room full of interested attendees, both members of PACE, representatives of the civil society and the Ukrainian community in France. It provided for a very good exchange, which contributed in gathering thoughts to the final debate and voting on the credentials of the Russian delegation, which took place on Wednesday evening.

After a long and heated debate, the PACE finally adopted a resolution based on the report of the Standing Committee on Russian delegation credentials, proposing a list of requirements and steps forward required for Russia to regain its full rights as a PACE member. It decided that concrete actions, proving good political will and readiness for a dialogue were needed. In the meantime, the sanctions against the delegation have been maintained, i.e. the Russian delegation will still have no voting rights nor the right to participate in the works of PACE’s main bodies. The credentials will again be reviewed in April to see if there is any positive change in the behaviour and approach of the Russian Federation.