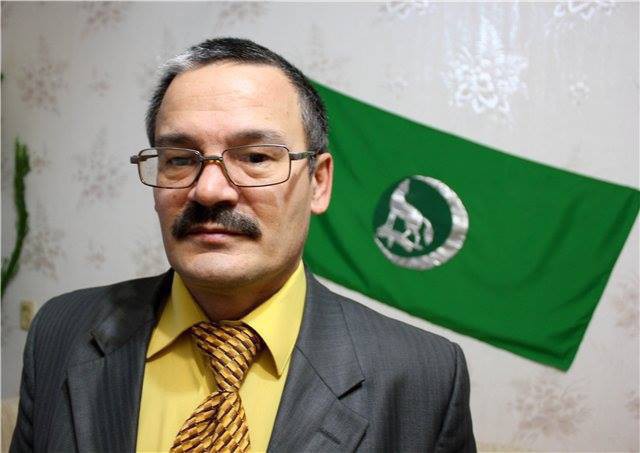 Rafis Kashapov is still on a hunger strike

The Tatar activist, arrested in Kazan, who openly sympathises with Ukraine, has been on hunger strike for almost two weeks now. Meanwhile, the oppression of people who have stood in his defence, is ongoing, and the local television stations materials defaming the activist.

According to the counsel of the Tatar activist, the investigation will most likely begin next week. An investigation group has been set up; it consists of 4-5 people, who have prepared an expert opinion regarding the charges against Rafis, but the defence hasn’t had an opportunity to become familiarised with the document. – Perhaps they will allow me to read it when the investigation is formally opened, or, perhaps, only after it ends – the counsel wonders.

Without waiting for the results of the investigation, the local state television ‘The New Age’ presented its own version of events. On 18 January, 2015, it aired video footage depicting Rafis Kashapov as extremist. His views regarding the fact that the Crimea has become annexed and that eastern Ukraine was attacked by Russia, were considered by the host of the programme as ridiculous and eccentric opinions which should rather be ignored than discussed. The material also included Rafis’ statements regarding his stay in Poland, and photos from the Warsaw actions of solidarity with Ukraine.

Rafis Kashapov is one of the leaders of the Tatar revival in Naberezhnye Chelny in the Republic of Tatarstan, which is part of the Russian Federation. He was arrested on 28 December, 2014, shortly after his return from Turkey, where he organised protests against the annexation of the Crimea and the government of Vladimir Putin in Russia. He called for the unity of Turkic peoples living in Turkey, the Caucasus, Russia and Central Asia, and solidarity with the persecuted Crimean Tatars. The reason for the initiation of a criminal case against him was his entries on the VKontakte website, in which, among others, he compared Russian regime with the Nazi dictatorship. The authorities have qualified it as a crime of incitement to hatred on grounds of nationality (Article 282.1 of the Criminal Code), which is punishable by up to 4 years’ imprisonment.

– Following the arrest of Rafis, I have asked several times for the opportunity to visit my husband and only on 15 January, 2015, did I receive permission to visit him for the first time – Kashapov’s wife, Nurzia, stated. – The next meeting should be held on 29 January, but on the condition that I agree to be questioned. I’ve explained to the investigators several times that I do not want to be questioned, but they rudely replied that they would question me anyway. They threatened me and I’m afraid that if I don’t agree, something will happen to me, too. They are persuading me to come in for questioning, but they have failed to send a formal notice – she added.

Kashapov’s family members are not the only ones who are facing problems now. According to his wife, many people spontaneously protested against the arrest of the activist by organising single-person pickets. For this reason,Danis Safargaliyev, an activist who organised such an action in Kazan, the capital of Tatarstan, was fired from his job. Another activist was arrested in Izhevsk. He was cross-examined in court.- All those who take to the streets in order to express their support for him, are subsequently subjected to oppression – Nurzia Kashapova summed up.

The counsel last saw Rafis on 22 January, 2015. It was the 4th day of his hunger strike. – He told me that the day before, he had been visited by workers of the detention centre who were persuading him to end the protest. To Rafis, the hunger strike is a protest against his unlawful arrest, the opening of an investigation and persecution of people who think differently. And also, against Russia’s intervention in the internal affairs of Ukraine – the counsel added. The reasons for which Rafis decided to take this radical step are laid out in his statement which he submitted to the prison governor just before the commencement of his hunger strike.

Initially, Kashapov was kept in a cell with 5-6 other prisoners, then he was transferred to a double cell. Currently, he is staying there alone. According to the counsel, the arrest of Rafis is a demonstration of the power of the authorities and, at the same time, a warning to others. Therefore, his hunger strikeis perceived as an expression of rebellion, directed at Putin’s regime. The Open Dialog Foundation hereby recognises the arrest of Rafis Kashapov and harassment of the people who stood in his defence, as an unacceptable infringement of freedom of speech by the Russian authorities.

Appeals for his release can be sent to the following addresses: