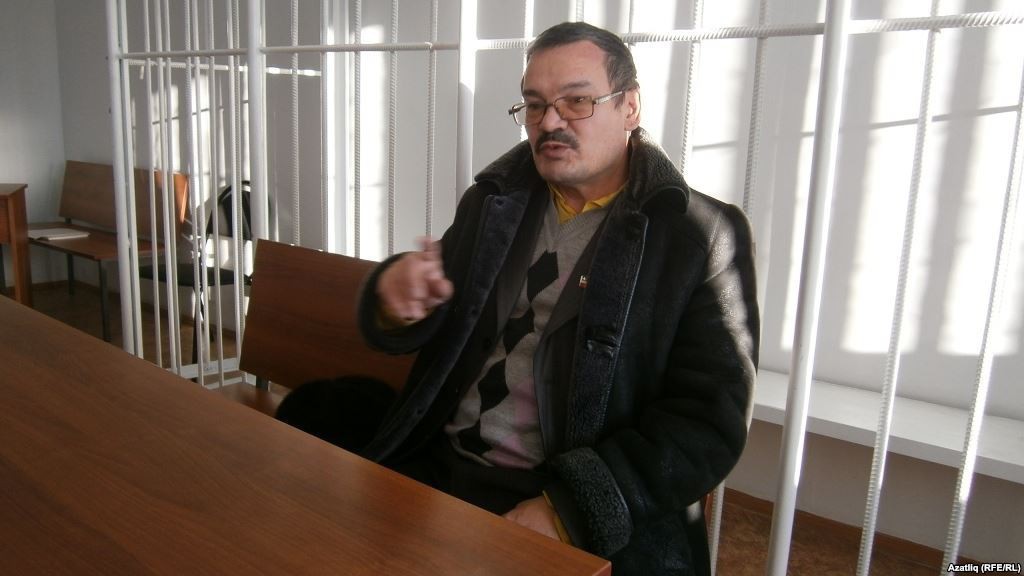 He was calling for solidarity with the Crimean Tatars and Ukraine, and was arrested for inciting racial hatred

Rafis Kashapov, one of the most important Tatar activists from the Republic of Tatarstan, is continuing his hunger strike in a Kazan prison. He was placed there after returning from Turkey, where he had organised support for Ukraine and the Crimean Tatars.

In the face of the Russian annexation of the Crimea, the Tatars, the original inhabitants of the peninsula, fell victim to persecution. Many of them fled their homes. Russia is not permiting Mustafa Dzhemilev, the leader of the local Crimean Tatar government (Mejlis) to enter the Crimea. Rafis Kashapov, the leader of the All-Tatar Public Centre (ВТОЦ) from Naberezhnye Chelny (Republic of Tatarstan in Russia) has loudly expressed his solidarity with his compatriots from the Crimea since the beginning of the Ukrainian conflict. He has also become involved in actions of support for Ukraine. In recent weeks, he has been in Turkey, where he organised a series of anti-Putin demonstrations with the participation of representatives of the  Turkic People Diaspora.

Turkic peoples are scattered from the Balkans and Turkey, to the Caucasus, and from the Russian Volga region and Central Asia, to Western China and Siberia. Apart from the Turks, they include Azerbaijani people, the Tatars, the Bashkirs, the Mordvins, the Yakuts, the Kazakhs, the Uzbeks, the Tuvans, the Uyghurs and others. The number of people who speak the languages of the Turkic group, similar to Turkish, is estimated at 200 million. The common front of the Turkic peoples against the policy of Russia in Ukraine would be dangerous for the Kremlin, both from the point of view of foreign policy and domestic affairs. In Russia, the concerns about the intensification of decentralist tendencies are still high. They often become an excuse to restrict freedom of cultural development of minorities and exert pressure in order to bring about their Russification.

On 28 December, 2014, shortly after Kashapov’s return from Turkey to Tatarstan, the FSB detained him. He was taken to prison in Kazan. A court sanctioned his incarceration for 60 days.

Rafis Kashapov was presented with charges under Article 282 of the CC of the RF (‘inciting hatred based on race, nationality, religion, national origin or membership of a social group’). He is facing punishment of up to 4 years’ imprisonment. As evidence, the prosecution presented the court with a list of articles which he had published on the VKontakte website (the Russian equivalent of Facebook) between the period of 1 July, 2014 and 12 November, 2014. They mentioned the following articles: “The Crimea and Ukraine will be free from the occupiers!”, “Yesterday Hitler and Gdańsk, today Putin and Donetsk”, “We will defend Ukraine and the entire Turkic world”, “Wherever Russia is, there are tears and death”. These publications express stark criticism of the Russian aggression in Ukraine; they are a protest against the Kremlin’s policy towards the Crimea and the Donbass.

His family fear that he is going to be sentenced to a long prison term, or that his incarceration will be extended indefinitely. On 19 January, 2015, Kashapov went on hunger strike.

Rafis Kashapov is one of the leaders of the autonomous movement in the Russian Tatarstan. During the 1990’s, as an entrepreneur, he financially supported Tatar cultural revival – he funded scholarships, issued publications in the Tatar language. He was also engaged in activities which promoted the unity of the Tatar diaspora, and solidarity with Turkic and other people, subjected to oppression in the former USSR.

In connection with his activities, he was repeatedly arrested and usually spent a few days in custody. Once – as in the case of the Ukrainian pilot, Nadiya Savchenko, he was forcibly admitted to a mental hospital.