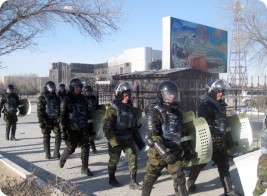 The Open Dialog Foundation continues to monitor acts of human rights violation by the police during and after the events in Zhanaozen. We present you with the evidence given by Nurgul Suleimenova.

– The riot policemen came in covering masks, so that none of them could be recognised … And … They were looking at us and laughing and swearing. But we held our dignity, so we retorted with a few words, and in response they started to swear and told us: I’ll do this or that with you, I’ll bust your fucking mouth – these are the words they used. They were so brave because they had their masks on. Even if they would have beaten us or raped us, we wouldn’t be able to do anything about it.

That’s how it was… Later we were questioned, photographed and we had our fingerprints taken. Then they said: “Now we will release you.” We believed them. We were telling them: “Please notify our relatives that we are here, they were never informed, they must think we are dead”. Then, around 4:00 they told us to go downstairs. We went downstairs and they registered us in the computer there. Where did they come from? They said they were from Astana, but I’m not sure about that. They did not introduce themselves by giving names. Whatever we asked about, they did not respond normally. “That’s what you deserve”, they said.

Then … we went in, they registered us. Close to me was a 50-year-old woman. The women who were before us, were not there anymore, they had been released thanks to their acquaintances.
Then … we were suddenly led into one cell. We were inside. Inside, there were no mattresses, no things were there. It was cold. We sat there until the morning. In the morning it became extremely noisy. We could hear screams. They did not let us lie down. They were beating everybody. Even men were screaming the way women usually scream. They would take us from the cells and shout “Run, run!” they forced us to run no matter what. There was human blood on the walls which they forced us to kiss.

– Well, in short, they mocked us. Then, when we went down into the temporary detention facility, we saw that there were things terribly scattered there. Pants were lying in one corner. On top of that people lay. Inside there wasn’t enough room for all the people. In the same cell there was probably around 40-50 people.

Then, the next morning we were called in for questioning. When the questioning was being conducted, inside the temporary detention facility, they would not take people back upstairs. Downstairs, one man said, “Do you want to be released?” I replied “Yes, I do, I have two children, I don’t have a husband. I live with my parents, I’m in a difficult situation”. He says: “If you want to be released, we’ll send you to the square. You’re a woman, so you should ask everyone what happened and who started this. You’ll gather information for us. I’ll not make you go to the court”. I started to cry, I was afraid, I was thinking about my family. He gave me his phone number, now I’m not sure where this phone number is.

The same night, on the 16th, after 4 o’clock, closer to 6, some policemen came. I was called and taken away. They took me to the shower room under the temporary detention facility. I went there. Then the man told me: “Take off your clothes!” I asked why I should undress. He said “take off your clothes, or I’ll call riot police”. Unless you undress by yourself, we will undress you; then we will press you. “Hey, I do not know what it means ‘to press’, we have not seen such things” I replied. Then they took me from the shower room and led me to the second cell. I looked inside and everything inside was covered with black blood, the guys were only in their underpants. And they were lying on each other. There was no place to sit or to lie down there. They said to me, “Now we’ll take you to our colleagues, we will press you”. I began to cry.

It was very dark in the shower room. Well, it was a shower room; a dirty place. I began to say, “I have two children. I take off my clothes in front of no one but my husband. If you undress me here, when I am released, I’ll hang myself, if you dishonor me. I said that and left.

He said, “Tell the girl that you got undressed. So that she gets undressed, too. I told him, “I did not undress. How can I tell her so? Then I went into the cell. I was scared. My female friend was then taken.

My friend went, and later told me that she got undressed. I asked her if she got fully undressed. She said that she took off her jacket and trousers to the knees. On her thighs were bruises. Then the second police officer came. He said, hey, what are you doing? And then she was brought back.
She also was told, “We will press you”. She also did not understand what it means “to press”.
Then at 6-7 in the morning screams started. Then the woman next to us became ill, we asked the men to bring her tea. They would not give us tea or any regular food, only stale bread.
Then I went to get tea and went outside. I went outside and everybody there was so tormented, mauled, battered. So, in short, that’s how the 17th passed. On the 17th we were interrogated further.

On the 18th, the managers came to us. I don’t know their names. They asked if I thought about their proposal. I told them that before the release I had warned them that I cannot do such things. He says, well, look, in that case I will send you to court. Then, at the lunch time we were called to the third floor for questioning, to the department or the temporary detention facility. We signed a written pledge not to leave the town. They said: “Give us your instruments, they will be kept here as a guarantee; bring three persons’ documents”.

So, on the 18th, they also signed a written pledge not to leave the town. Later in the afternoon … I told you that on the 17th, when I went outside to take the tea, at that time I saw many of my friends. I began to worry about them. They have no close people, they have no parents.

On the 19th, I went to the police department again. I couldn’t get inside. I read the list. In the evening, at 8.30 p.m. they went out. We have gathered, we wanted to talk with the released. I asked them what the policemen did to them. They said that they were beaten. Not a single part of their bodies was unharmed. One of them had a broken rib, he was taken to hospital.

Then another guy was beaten severely, he could not open his eyes. At night, the pharmacies do not open. So we were sitting at home. A curfew was in force.

They applied some gel, then they said, “We cleaned toilets, washed off blood. Then they said, “Did you look in the direction where the garages are? I said “Yes”. When I was sitting in the temporary detention facility, I was peering through the bars, and in one corner there was a door that leads into the garage. There is the garage, and near the garage there is a yard for detainees. “If you do not believe me, look there again”, someone said to me. Then I looked through the bars, and there were crowds of people, all dressed in the ‘KazMunayGaz’ uniforms. It turned out that people were being beaten. They were screaming so loud that it echoed. Wearing helmets, I think, were the riot police. By their appearance I could not tell. But they were severely beating people. They all have their brothers, relatives… This is what they were telling us about.

They asked, “Please tell us what you saw, we are dying to hear”. They say, “We were cleaning toilets, washing off blood”. They had to pour out water, so they went behind the police department building. They went out, and garbage was stored close to the garage. We had to go inside. We went into the garage, and there were men in their underpants, screaming. They had no clothes on, and they were sitting inside. One of them said: “It’s impossible to sit here, he raised his voice a little and they began to beat him about his knees with a truncheon and threatened, that they would put him into a separate cell, if he didn’t close his mouth. It’s better not to witness such things. It is better to hear such stories being told from others.

Then, when they went out, after they finished all the formalities, they went to take their mobile phones. They went but there were no mobile phones there. And there weren’t any money or house keys. There was only a simple telephone, no money, and they returned all the documents, but all the purses were empty. And people would come and take, and take … ( says something inaudible), you can just take a simple phone.

Recently, I had to finally get my documents, so I went to the police department. I went there and they said (whispers) “Let’s have sex”. That’s what they said. I said that I could not do such a thing. I said:  “Go ahead, send me to the court, I may even be sentenced, but I’m not going to have sex with you. I have parents and a younger brother, I do not want to lose my dignity”.
“Is that right?” they asked. “If you want to have your documents back, if you want your case to be discontinued, you have to have sex with someone”. But no one is going to believe it, right? Nobody is going to bear responsibility for the documents and for the fact that someone had to have sex with someone else?