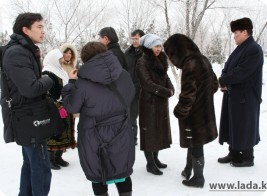 The Open Dialog Foundation has noted that the continuation of rights violations against the detained opposition activists, as well as the lack of freedom of assembly and freedom of speech in Kazakhstan. Considering the words of President Nursultan Nazarbayev expressed on March 2, 2012 at a meeting with heads of diplomatic missions accredited in Astana, that “a ship called the OSCE continues to go roll on one side“, we express our concern about the state of democracy in this country and bring the latest developments to your attention.

03/07/2012, The Almaty court denied the wife of the leader of the unregistered opposition party “Alga!” Alia Turusbekova the right to appeal against the decision to refuse her request to communicate with her husband as a defender. This decision is not subject to appeal in higher court.
03/05/2012, after prolonged refusals of the authorities, Alia Turusbekova received permission to see her husband Vladimir Kozlov after he underwent surgery.
02/21/2012, The Almalinskiy district court of Almaty decided to refuse her request. The refusal was motivated by the fact that Alia Turusbekova has a witness status, even though she has stated that she refused to testify.

Denial to the wives of communicate with their detained NSDP leaders

03/07/2012, the wives of the convicted after a meeting February 25 NSDP leaders, Bulat Abilov and Amirzhan Kosanov, came to the detention center for administrative detainees in order to request the right to communicate with their husbands. The right of communication was denied.

Blogger Tungishbaev Murat (Kazakhstan) told “The Republic” of the attempts to exert pressure on him by security agencies. February 10, 2012, Murat Tungishbaev was questioned by the investigator Shaken, in the investigation department of the National Security Committee for his participation in the events of December 16, 2011 in Zhanaozen. According to the blogger, he signed a warrant agrreing not to disclose details of the interrogation, and after interrogation, he was offered a cooperation arrangement with the security agencies. Murat said that during the course of conversation he was told about the causal link between the training on the work in social networks and the events in Zhanaozen, and the also tried to convince him to testify against Vinyavskiy Igor and Vladimir Kozlov.

August 26, 2011, Murat Tungishbaev conducted a training sessions on work in social networks for civil society activists, among whom were also striking oil workers. The organisers of the project were the National Democratic Institute and the Office for Human Rights in Kazakhstan.
December 19, 2011 the report came that Murat Tungishbaev was beaten by the police at the Shetpe police station in the Mangistau region.

The arrests of activists of the “Alga!” party

March 6, 2012 activists of the party “Alga!” who handed out leaflets on the day of mourning (100 days after the events in Zhanaozen) on the Arbat (center of Almaty) under Art. 373 of the Administrative Code were detained.

Note: December 16, 2011 in Zhanaozen, in the Mangistau region there were clashes between striking oil workers and the police, in which, according to official figures, 16 people were killed. Opposition activists were accused of the organisation of riots, such as Ruslan Simbine, Ayzhangul Amirov Vinyavskiy Igor, Vladimir Kozlov, Serik Sapargali amongst others.

The main charges are inciting social hatred (article 164 of the Criminal Code) and Article 170 of the Criminal Code (public incitement to violent seizure of power, forced maintenance of power, undermining state security, or violent change of the constitutional system, as well as forcible violation of the integrity of the Republic of Kazakhstan and the unity of its territory and dissemination of materials with such content for this purpose, committed with the help of media or an organised group).

Ruslan Simbinov (the head of the office of the “Alga!” party in Astana) was arrested on December 28, 2011 under article 259 of the 2-1 and 3, paragraph “c” – drug possession with intent to supply on a wide scale. The arrest was preceded by an illegal search at the party office. Opposition activists see this as a political attack and call it a sham.

In Kazakhstan, the charge of inciting social discord was first presented in 2011 to the “Karazhanbasmunai” oil company trade union lawyer, Natalia Sokolova.