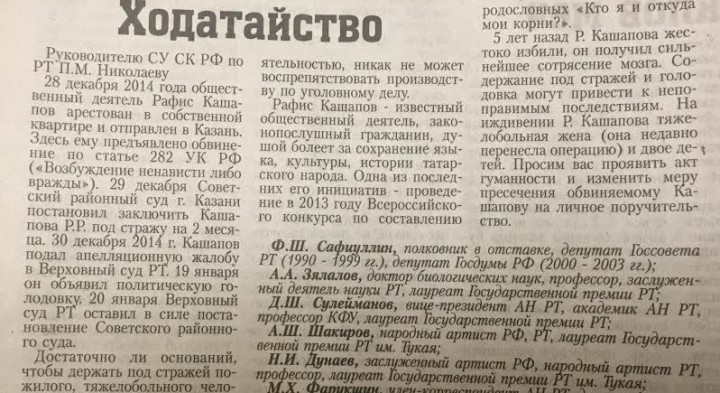 A group of intellectuals of Tatar nationality, including former Member of the State Duma, distinguished artists and scientists, vouched for activist Rafis Kashapov, currently on hunger strike. In an appeal, addressed to Chairman of the investigative committee in Kazan, they called for his release from custody pending trial.

The authors of the emotional letter, signed by 7 public figures of Tatar social, cultural and scientific life, urged the investigators to make a humanitarian gesture. Having been beaten 5 years ago, Kashapov does not enjoy good health, and his stay in prison and his hunger strike may threaten his life and well-being. His family members, who are also his dependants, are also being subjected to strong psychological pressure.

The undersigned issued a reminder that Kashapov is an activist who greatly contributed to the revival of Tatar culture and language. As a law-abiding citizen, he would not impede the properly run proceedings of his case.. The appeal was sent by post to Pavel Nikolayev, the chairman of the investigative committee. Investigator Shamsudinov, famous for his involvement in the case against Kashapov, received the second copy with a request that it be included in the case file, but he failed to accept it. The next day, on 5 February, 2015, the appeal was published by the local newspaper ‘Zvezda Povolzhya’ [‘The star of the Volga region’].

Rafis Kashapov is one of the most important contemporary Tatar activists, the leader of the All-Tatar Public Centre (ВТОЦ) from Naberezhnye Chelny (Republic of Tatarstan in Russia). Since the 1990’s, he has carried out publishing activities, funded scholarships and supported the revival of manifestations of the Tatar identity. He was repeatedly arrested, and the cultural centre led by him was seized by the authorities. When he was forcibly admitted to a mental hospital in 2003, Boris Berezovskiy from London offered him legal assistance. Kashapov was supported, among others, by famous journalist Anna Politkovskaya, and human rights defenders from the organisation ‘Memorial’.

At the end of 2014, Rafis Kashapov went to Turkey, where he organised protests against the persecution of the Crimean Tatars following the Russian annexation of the Peninsula. He also expressed his solidarity with Ukraine. Along with the Tatars, the protests were also attended by other representatives of the Turkic people diaspora, among others: the Azerbaijani people, the Bashkirs, the Kazakhs and the Uyghurs, living in vast areas of Russia, the Caucasus and Central Asia. Kashapov called for the unification of the Turkic peoples (approx. 200 million people) against Russian policy which threatens neighbouring countries and is unfavourable for minorities.

Whilst in prison, Rafis Kashapov appealed to the President of Turkey with a request that his immediate family be granted refugee status and protection.

His counsels are being subjected to intimidation. Kashapov’s wife was blackmailed in that a testimony was presented to her for her signiture as a condition of her having the opportunity to visit her husband. Whilst in prison, Rafis Kashapov appealed to the President of Turkey with a request that his immediate family be granted refugee status and protection.

Not only were his family members subjected to oppression, but also strangers who interceded on behalf of Kashapov. Cases of dismissal from work or detention of activists who took to the streets of Kazan in order to protest against the arrest of Rafis, have been reported.

The announcement of the appeal by renowned figures of Tatar life in Russia is an act of courage, for which they may suffer oppression.

Below, we publish the original content of the appeal, which was signed by: 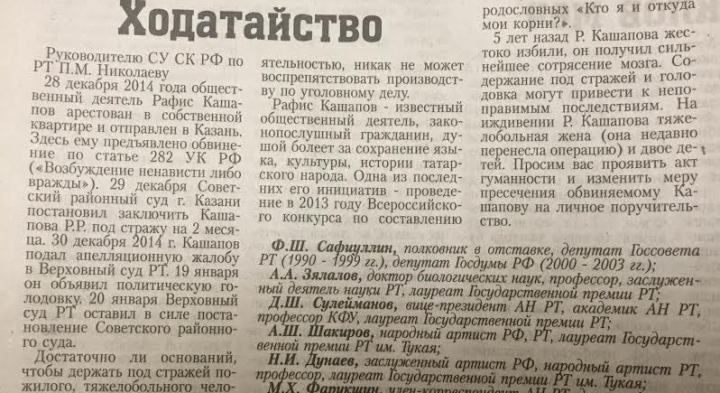 The Open Dialog Foundation hereby recognises the detention of Rafis Kashapov and harassment of people who stand in his defence, as an unacceptable violation of freedom of speech by the Russian authorities.

Appeals for his release can be addressed to: