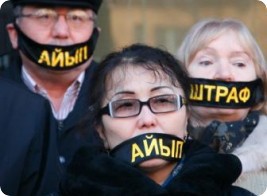 Attacks on the Press 2010: Kazakhstan

Key Statistic
44 Defamation complaints filed in first six months of 2010, many of them by government officials.

President Nursultan Nazarbayev’s government failed to deliver the press freedom reforms it had promised in exchange for gaining 2010 chairmanship of the Vienna-based Organization for Security and Co-operation in Europe, or OSCE. Not only did the government renege on explicit pledges to decriminalize libel and bring press laws in line with international standards, it enacted a restrictive new measure governing Internet content and a sweeping privacy law that shielded government officials from public scrutiny.

June found that attacks on the press continued unabated in 2010, even as Kazakhstan led the OSCE, the 56-member pan-European human rights and security body. At least one Kazakh journalist and one prominent human rights activist were jailed in late year in retaliation for their work, and at least two independent newspapers shut operations under government pressure. The administration continued to use politicized defamation complaints and bureaucratic pressure to stifle critical news and information, CPJ found.

In interviews with dozens of journalists, press freedom advocates, and human rights defenders, CPJ also found widespread disillusionment with the OSCE and the international community in general. In the years preceding and including Kazakhstan’s chairmanship, they said, the government methodically pursued a course of repression that was unchecked by the international community. Based on its mission, CPJ issued a special report in September that found that Kazakhstan’s human rights and press freedom failures had “compromised the OSCE’s international reputation as a guardian of these rights, undermined the organization’s relevance and effectiveness, and thus devalued human rights in all OSCE states.”

Despite concerns raised by CPJ and others, the Nazarbayev administration persuaded OSCE members to stage a December organizational summit in Astana. A CPJ delegation traveled to Vienna to urge OSCE representatives to address Kazakhstan’s poor press freedom record at the summit and restore press freedom as a top issue in 2011. CPJ’s Nina Ognianova and Jean-Paul Marthoz met in October with Kazakhstan Ambassador Kairat Abdrakhmanov, chairman of the OSCE permanent council, and with OSCE representatives from Belgium, which held the European Union presidency, and Lithuania, the 2011 OSCE chairman.

CPJ noted that OSCE nations had agreed in the Moscow Commitment of 1991 that human rights and fundamental freedoms are a collective concern, not simply an individual state’s internal affair. When the summit was held, however, press freedom and human rights went unaddressed, and the Nazarbayev administration was able to use the event to polish the rough edges of its international image. Independent journalists and human rights defenders were dismayed that OSCE members appeared to disregard their core principles.

Enacting restrictive Internet legislation just months before becoming OSCE chairman, Nazarbayev’s government showed clear disregard for the organization’s principles. The 2009 law equated all Internet resources–including personal blogs, chat rooms, and social networking sites–with traditional media, making them subject to the same repressive restrictions that have long applied to the press. Those regulations–among the harshest in the former Soviet states–criminalize defamation and allow for the seizure of editorial material, the blocking of broadcasts, and the suspension or closure of media outlets.

Kazakh authorities created an agency called the Service to React to Computer Incidents to implement the Internet law. Kuanyshbek Yesekeyev, a senior government regulator, announced on March 1 that the service had started a review of “destructive” websites. He also noted the creation of “blacklists” of such sites but did not specify what sites were on them or how a site’s “destructive” character would be established. Attempts by local media groups and CPJ to receive clarification went unanswered.

In December 2009, on the cusp of Kazakhstan assuming chairmanship of the OSCE, Nazarbayev signed into law a measure expanding privacy rights in a way that benefited government officials. The legislation banned publication of information about an “individual’s life,” while imposing penalties that included closing of media outlets and imprisonment of up to five years for journalists. The law prohibited any “unsanctioned interference into an individual’s life,” without making clear distinctions between an individual’s private and public life, or between the activities of a public official and those of an ordinary citizen. Analysts say the broadly worded measure would enable government officials to pursue privacy complaints in criminal court against journalists who are covering official activities.

Already, politically motivated defamation claims are used as a censorship tactic against pro-opposition and independent outlets. The local press freedom group Adil Soz found that 44 defamation claims seeking a total of 392 million tenge (US$2.6 million) in damages had been filed in the first six months of 2010. Of those plaintiffs, half were government officials. Tamara Kaleyeva, head of Adil Soz, told CPJ that news managers know they must avoid criticizing top officials or they will face lawsuits, intimidation, closure, or jail. “Any form of critical coverage of the private or public life of the president and his family is out of the question,” Kaleyeva told CPJ.

When independent newspapers pushed the boundaries, they paid a dear price. The Almaty-based weekly Respublika, a persistent government critic, has been a target of arson, threats, and defamation complaints over its 10 years in existence. Throughout 2010, the weekly dealt with the fallout from a September 2009 libel judgment that awarded 60 million tenge (about US$400,000) in damages to the partly state-owned BTA Bank. The judgment stemmed from an article claiming the bank had been facing financial pressure from foreign investors. The paper stood by its report.

Under government pressure, printing houses refused to publish the paper throughout the year; Respublika staff members produced the weekly on office equipment instead, collating and stapling the pages of each copy as if it were a college term paper. Aggravating matters, an Almaty district court ruled in February that state distributors could not deliver the paper until Respublika had paid all the damages to BTA Bank. The weekly appealed, saying it could pay damages only if it remained a viable business, but to no avail. Circulation dropped from 22,000 to 19,000, the paper said.

Respublika’s main website was inaccessible to most domestic viewers throughout much of 2010. While alternative Web addresses kept the paper online, many readers were lost amid the ever-shuffling platforms. Respublika staff and other journalists believe the main website was blocked by Kazakhtelecom, the country’s largest Internet service provider. Kazakhtelecom, which is majority-owned by the government, did not publicly address the assertion and did not respond to CPJ’s request for comment. But an experiment carried out by Respublika readers in the spring lent credence to the claim. Yevgeniya Plakhina, aRespublika reporter, told CPJ that readers were asked to open Respublika’s website on their personal computers. Readers served by Kazakhtelecom uniformly said they could not load the site, while readers served by other providers were able to access it.

In October, a prison board in Taraz rejected an appeal to move Ramazan Yesergepov, editor of the now-defunct independent newspaper Alma-Ata Info, to a lower-security prison colony. Yesergepov was jailed in January 2009 on a trumped-up charge of “collecting state secrets” after his paper published two memos from Kazakhstan’s National Security Committee (KNB) that suggested the agency had exerted undue influence on a prosecutor and judge in a criminal tax evasion case. The KNB, embarrassed by the disclosure, called the tax memos “state secrets” and targeted Yesergepov for reprisal. He was tried behind closed doors, deprived of a defense lawyer, and sentenced in August 2009 to three years in jail.

CPJ was initially granted permission to visit Yesergepov in June at a prison colony in Taraz, but officials revoked the approval on the day of the visit. CPJ did interview the editor by passing questions through another visitor. “The cynical actions of our authorities in regard to the human rights of Kazakhs can be considered laughing in the face of the OSCE as an institution,” Yesergepov told CPJ from behind bars. “I have little hope that I will be released early. But I do hope that with the support of international organizations, the issue of the lack of fair trial for political prisoners in Kazakhstan will be put on the international agenda.”

Yevgeny Zhovtis, a human rights defender who had provided commentary on Kazakh human rights and press freedom issues to international institutions, was serving a four-year prison term in 2010. He was convicted of vehicular manslaughter in September 2009 despite extenuating circumstances and public statements by the victim’s family that the charge should not be pursued.

Kazakh police said in October that they had arrested two men suspected of involvement in the 2009 killing in Almaty of Kyrgyz journalist Gennady Pavlyuk. The journalist’s widow, Olga, told the Kazakh service of the U.S. government-funded Radio Free Europe/Radio Liberty that investigators identified one of the suspects as a Kyrgyz security agent. Pavlyuk, 40, his hands and legs bound with tape, plummeted from the upper-story window of an apartment building. Editor of the independent Kyrgyz newspaper Bely Parokhod, a publication known for probing high-level corruption, Pavlyuk had traveled to Almaty on business, the purpose of which remained unclear. Some local news reports said the journalist intended to start an online publication and had traveled to Almaty to meet with potential partners.