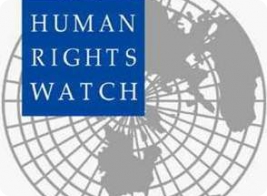 (Almaty) – The Kazakhstan judiciary should ensure a fair and public trial for the 37 people scheduled for trial on March 27, 2012, on charges of organizing and participating in mass unrest in December 2011, Human Rights Watch said today. The defendants, two of whom are under 18, were arrested in December and January 2012 after violent clashes erupted between civilians, including striking oil workers, and police at the site of an extended oil workers’ strike in Zhanaozen, at the heart of Kazakhstan’s oil industry.

The trial is to be in Aktau, the administrative center of the Mangistau region in oil-rich western Kazakhstan. Some defendants are also accused of offences including arson, destruction of property; violence against officials; desecrating the national flag, emblem, or hymn; and theft, official statements say. The authorities have promised the trial will be open to the public.

“Each of the 37 defendants on trial is innocent until proven guilty,” said Mihra Rittmann, Central Asia researcher at Human Rights Watch. “The authorities need to show that proceedings will be scrupulously fair, as required by international fair trial standards, and will be open and accessible to defendants’ relatives, the media, and both national and international trial observers.”

On the morning of December 16, striking oil workers gathered on Zhanaozen’s central square, the site of their peaceful months-long strike and the location of an official Independence Day celebration scheduled for later that day. Multiple sources reported that clashes began when people who had gathered there charged the stage set up for the Independence Day event and broke sound equipment. Over the course of the day, several buildings were set on fire and shops were looted. The police, in response, opened fire on civilians, killing 12, according to official numbers.

The authorities immediately opened a criminal investigation into the violence and in the days following detained hundreds of people in Zhanaozen.

Human Rights Watch has not been able to independently confirm who carried out the violence or under what circumstances government troops used lethal force. But there are grounds for concern that in seeking to prosecute those who led and carried out the violence, law enforcement in western Kazakhstan conflated the peaceful strike with the rampage, looting, and arson on December 16. The hundreds of striking oil workers were seeking higher wages, among other demands.

President Nursultan Nazarbaev publicly sent a message that law enforcement should not conflate the peaceful oil workers’ labor dispute with the December 16 violence. In his December 17 remarks concerning the violence in Zhanaozen, he stated, “I believe the labor dispute of oil workers must not be mixed in with the acts of bandit elements who sought to abuse the situation in their criminal plots.”

Yet, onJanuary 25, the prosecutor general issued a statement squarely placing blame for the clashes on striking oil workers. He said that, “A group of former (previously fired) workers of the ‘OzenMunaiGaz’ oil producing enterprise with the support of the hooligan youngsters started mass insurgencies leading to debacles, looting, setting fire and violence against civilians and police officers.”

An Aktau-based lawyer representing six of the 37 defendants told Human Rights Watch that his clients, all oil workers who had participated in the strike, had no involvement in the arson and violent attacks in Zhanaozen on December 16. His clients were on the square that day because that was the location of their strike, he said.

The defendants also include three outspoken oil workers, all of whom had assumed active roles in the strike. Maksat Dosmagambetov had traveled to Moscow in June to speak to labor activists and the media about the oil strikes in Kazakhstan. Talgat Saktaganov went to Warsaw in late September to speak about the strike at an Organization for Security and Co-operation in Europe (OSCE) meeting. Rosa Tuletaeva provided commentary and information to the media and international organizations in western Kazakhstan throughout the strike.

A number of other outspoken oil workers and political opposition activists who openly supported the strikers were also arrested in Zhanaozen and Almaty in the weeks and months following the December 16 violence. Nine are in pretrial detention facing criminal charges of “inciting social discord.”  The investigation is ongoing.

“The authorities of course have a responsibility to prosecute criminal behavior, but criminal law should never be invoked as retaliation for workers exercising their legitimate right to strike,” Rittmann said. “We will see if the prosecution has credible and admissible evidence to establish beyond reasonable doubt that any of the defendants are personally liable for actual criminal acts.”

In late December, Human Rights Watch interviewed several people who either witnessed or were subjected to physical abuse by police in custody between December 16 and 19. They described torture and ill-treatment, including instances in which police kicked detainees, beat them with truncheons, stripped them naked and walked on them, and subjected them to freezing temperatures. Human Rights Watch also documented the death of Bazarbai Kenzhebaev, 50, who was detained by police on December 16, held in custody until December 18, and died on December 22 from a ruptured intestine and blunt abdominal trauma, injuries apparently sustained in custody.

Human Rights Watch, in a letter to the prosecutor general on February 1, asked the authorities to investigate the allegations of ill-treatment and torture. Although authorities opened an investigation into Kenzhebaev’s death, the Prosecutor General’s Office has not publicly announced any investigation into other allegations of ill-treatment in custody, including those documented by Human Rights Watch.

“Ensuring a fair trial means that any torture allegations should be fully investigated,” Rittmann said. “That means a full, thorough, and impartial investigation that is capable of establishing what happened and who may be responsible and holding the perpetrators to account.”