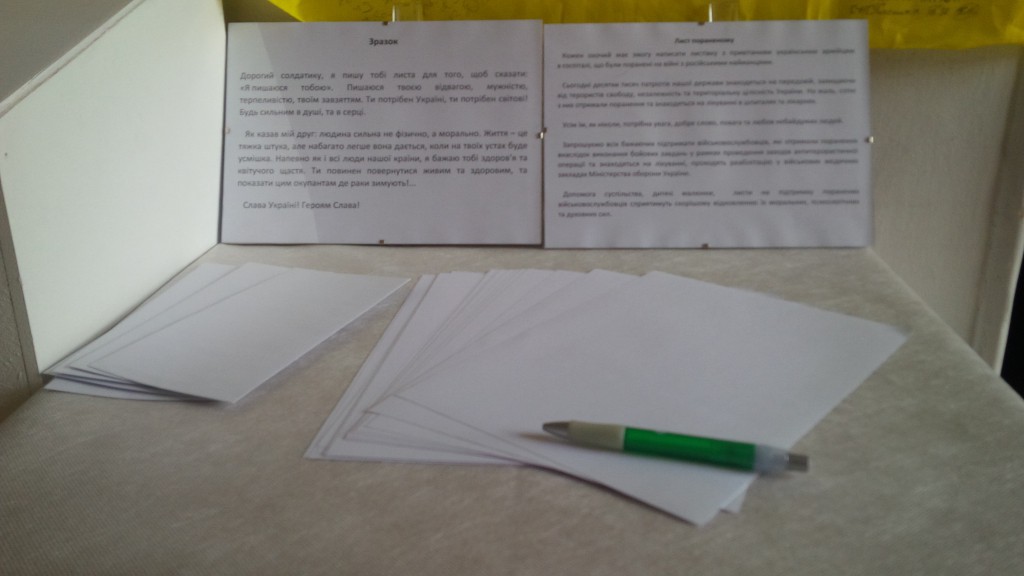 Letter to a wounded soldier: A Field Post Office has started to operate at “Ukrainian World”

‘The strength of a human is not in his physical power but in morality. Life is a hard game, but it is easier to live with a smile on your face,’ Ukrainians living in Poland write in their letters addressed to Ukrainian soldiers undergoing medical treatment in an Odessa hospital.

The addressees of the letters are wounded soldiers injured in clashes during the ongoing anti-terrorist operation in the east of Ukraine. They are currently undergoing medical treatment and restorative care in hospitals of the Ministry of Defence.

The letter writing campaign, designed to help wounded combatants was initiated, together with the Open Dialog Foundation, by a lawyer from Odessa, now residing in Poland – Alla Maievska. A corner has been set up to provide Information and Help at “Ukrainian World”, at 63 Nowy Świat Street in Warsaw, where any Ukrainian (and not only Ukrainians!) can support recovering soldiers, with a few words on a piece of paper. The letters are intended to cheer the soldiers up. ‘Patriots of our country, who have been severely wounded need – more than ever before – attention, kind words, respect and people who are not indifferent,’ says the project’s initiator, Alla Maievska.

The letters we have received, together with other gifts such as children’s drawings or clothes, will soon reach Odessa.