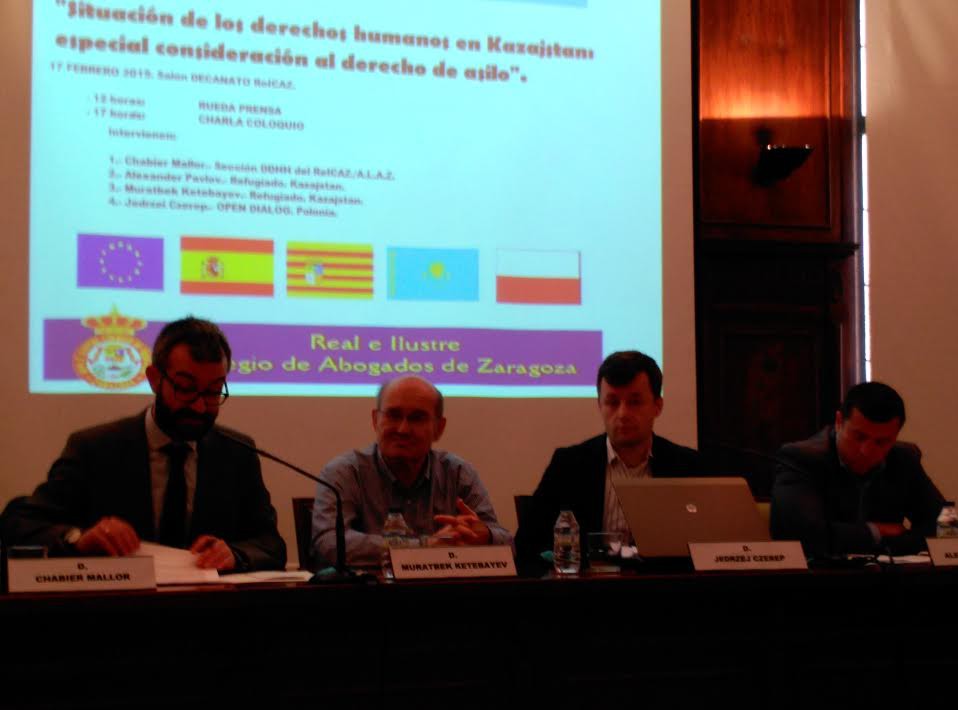 On 17.02.2015, upon an invitation from the Bar Council in Zaragoza (Spain), Muratbek Ketebayev, Alexandr Pavlov, and Jędrzej Czerep of the Open Dialog Foundation attended the conference on the “Situation of Human Rights in Kazakhstan: Right of Asylum”.

The conference was held in the stately dean’s hall of the “Real e Ilustre Colegio de Abogados de Zaragoza (ReICAZ)” centre for lawyers’ education at one of the oldest legal associations with its traditions going back to the 15th century.

The conference attracted an audience from the legal circles which also meant a high level of discussions. The host of the meeting, Chabier Mallor Monzon, provided an introduction to the subject by discussing Spanish regulations on asylum, the weaknesses both in the system and those demonstrated through practice. Jędrzej Czerep covered mechanisms of abuse of Interpol by Kazakhstan and the need for Interpol reform, using the examples of demands for extradition addressed directly or indirectly by Kazakhstan to Spain, the Czech Republic, France and Poland.

Muratbek Ketebayev, one of the most well-known dissidents from Kazakhstan, wanted by the regime of Nursultan Nazarbayev, presented the characteristics of Nazarbayev’s rule, the current situation of human rights and the rule of law in Kazakhstan before the presidential elections, and his own situation in Spain. He was arrested on 28.12.2014 under an Interpol Red Notice and, despite his refugee status in Poland, put in prison and forced to face the legal and bureaucratic mechanisms set in motion by Kazakhstan which unlawfully demanded his extradition.

Alexandr Pavlov (former head of security of another dissident, Mukhtar Ablyazov), who had spent 18 months in a Spanish prison awaiting his politically motivated extradition to Kazakhstan, presented new information on the involvement of Kazakh authorities and lawyers in his case in Spain, indicating that the Supreme Court’s ruling on his asylum was to be expected any day. On the day of the Conference, the Supreme Court was in session in Madrid. In its ruling, announced a few days later, the Court allowed Pavlov’s arguments and granted him asylum, recognising him as a politically persecuted individual who should be granted protection by Spain.

Of particular interest during the discussion was the history of the strikes in Zhanaozen – Muratbek Ketebayev talked about their development and pacification, and the role of the Alga! party in supporting the protesters. The party’s leader, Vladimir Kozlov, was sentenced to seven and a half years in prison in Kazakhstan. The panellists also discussed the ambiguous approach of European governments to human rights (economic diplomacy) and the activities of special advisers to President Nazarbayev, Tony Blair in particular.