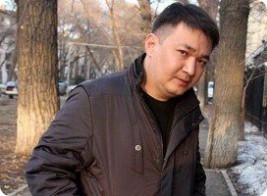 Press release: Employees of ‘The Republic’ released, but the director dissapeared

For the editorial staff of the independent newspaper “Voice of the republic” Wednesday morning started with an unpleasant surprise. Journalist Irina Mednikova and Head of Publications Dissemination Department, Julia Kozlova were met by the security services at the entrances of their homes. The women were taken in for questioning, without even allowing them the possibility to invite the lawyers, which is illegal, and questioned them the entire first half of the day, then released, but at five o’clock summoned them again to appear.

Along with them was detained the director of the company – publisher of the newspaper, Daniyar Moldashev (his name is familiar to journalists because it was him who was kidnapped and taken out of the country before the presidential elections by “people in civilian clothes,” and the editorial staff for a long time could not find out where he was and what was happening to him).

But even though the women from the editorial staff were released around seven o’clock Wednesday night,  Daniyar’s situation was different. He was also interrogated for the first half of the day, although he was not allowed to see his lawyer, and after the first interrogation was also released. But not for long. In the evening he was detained again – the witnesses of his retention were his lawyer and the editor of “Voice of the Republic”, Tatiana Trubacheva.

We went to Daniyar’s home to learn what he was interrogated about. At that time, he was still at home. But when we arrived – he was already taken. Daniyar’s mother told us that these were employees of the National Security Committee, and that, according to Daniyar’s words, he is forced to give some testimony, and he fears that he may be retained and placed in a secret NSC apartment. Not finding Daniyar, me and the lawyer decided to go to the Department of the National Security Committee. We started asking questions: where is Daniyar? While we were asking, he was brought in. They didn’t really allow us to talk with him, he only managed it to say that he was brought in to sign some papers, to be interrogated, as they said, it was a one-off situation, so they wouldn’t allow him to call his lawyer.

“The signing of papers” dragged on until  late at night. Daniyar said to his lawyer by telephone that he has brought home around midnight. But as it turned out today in the morning, he stayed at home just half an hour – he was allowed to take a towel, a toothbrush and then was taken again. Where to – it remains unknown. Perhaps, to that same safe house. It is also unknown exactly with regard to which case Daniyar was questioned – from his words it could only be understood that it had something to do with terrorism.

The details of how it happened have been told the editorial “Voices of the Republic” by Daniyar’s relatives this morning, and the editorial staff also received from them Daniyar’s message to colleagues.

Daniyar asked to give us this message and make it public – said Tatiana Trubacheva. – He is accused of terrible things, but even though he isn’t guilty in any way, he was forced to justify himself, as he was threatened that his apartment would be searched, where his elderly parents live, as well as he was threatened that if he remains silent, it will affect his children. He asked me to convey his apologies to all for being unable to resist the pressure from the part of the investigators.

Closer to lunch, journalists of the Moscow edition of “The Republic” reported that they received another letter from a permanent source, signed as “Aman Shabdarbayev”, which shed some light on Daniyar’s situation (quoted verbatim):

“As far as Daniyar Moldashev is concerned, he was put under an immense pressure. I confirm the reports on the Internet that physical violence was used towards him. In addition, he was threatened with having his home searched where his elderly parents live, and who would not survive it, with problems with his children, as well as with the fact that they will intentionally deteriorate his health with which he already has big problems.

After the first interrogation Daniyar Moldashev was released, but only in order to trace where he went, and with whom he communicated. Then, on the command from Astana was detained again. But because he and his companions from the NSC were seen by your journalist and his attorney, Moldashev, after the next stage of physical and moral pressure was supposedly released.

In fact, he was allowed to make a short call to his attorney, was taken to his parent’s apartment, where he came for a short time to collect his personal belongings, and then taken to the NSC safe house, which is used as a secret prison. And he was left there under the supervision of two NSC staff members, who change every 24 hours.

Moldashev’s phone was taken, he is deprived of any physical possibility to go outside or talk to anyone. His health significantly deteriorated, he is in a depressive state. This was the reason for changing the tactics of pressure put on him – now he is largely persuaded to sign the testimony he gave earlier after being beaten on Vladimir Kozlov and Muratbek Ketebaeva, including that on their behalf and under their control, he participated in illegal financing of political activities and preparation of terrorist attacks.

In exchange for his testimony he is promised a so-called witness protection program and the application of Article 65 of the Code of Criminal Procedure of the Republic of Kazakhstan. Moldashev’s testimony is very important to investigators because this criminal case based on similar declarations of people caught in such a “meat grinder”, and they want to see as much of such evidence as possible and they want for it to be as loud as possible.

The investigators do not have any other evidence. But it is possible to come up with witnesses and to find witnesses who will sign anything they are told to sign. In addition, the issue of declassification of also public statements given by one or more CNS agents in the ranks of the opposition parties and movements, which not only confirm the validity of the charges of terrorism, but will also prove that the NSC is working effectively, and his staff deserve high government awards”.

The Editorial staff of the „Voices of the Republic” considers it necessary to quote this excerpt from the letter in its press release, as it has high degree of confidence to the author: usually, Aman Shabdarbayev’s notices turn out to be true – if not for a hundred percent, then at least seventyy. This man warned, “The Republic” of the impending operational and search activity against the employees of the newspaper, and his words came true: the following editorial staff members have already undergone interrogation: Zhanar Kasymbekova, Makushina Oksana, Irina Mednikova, Julia Kozlova.

The editorial staff can also see that the journalists of the publication have been watched – this morning they recorded an unknown car in front of Guzyal Baydalinovoy’s house, who is the deputy director of the company – publisher and editor of the newspaper closed as a result of the BTA Bank’s claim – this newspaper was the predecessor of “Voice of the Republic”.

But the employees of the “Voice of the Republic” are already used to living in such conditions, and now are more concerned about the situation with Daniyar:
– We are afraid that they might break him psychologically – emphasizes Tatiana Trubacheva. – Yesterday, when we saw him at the NSC, he was very depressed. We are afraid for him – his testimony and denunciation are not that important, we all know that pressure can cause a person to say anything – right up to the fact that it was he who killed Kennedy. The most important thing right now is that he would be all right.

As for Irina Mednikova and Julia Kozlova, their situation is much better – they were released, and even were apologized to. But, nevertheless, there are things to which the editors consider it necessary to draw the attention of the media and human rights activists..

We unfortunately cannot tell in detail about what we were asked, because we signed the declaration of undisclosure, – said Irina Mednikova. – I can only note that the questions were very strange – I realized that I was trying to be blamed for something, but for what – I did not understand. But I would like to draw your attention now to violation of our rights as citizens. We were at least allowed to call the office, Julia was not even allowed to do so. Although according to the law, even if we have the status of a witness, we have the right to counsel.

– And I was shocked by how I was treated by the NSC staff members whom detained me – said Julia Kozlova. – Besides the fact that I was not allowed not call anyone, I was treated like a criminal. My lawyer was not allowed in immediately. I did not understand what they tried to accuse me of, but it was something connected with terrorism. And we have the status of witnesses in this case. I’m shocked – I’m sure it’s just an excuse invented in order to close our newspaper.

The lawyer, Sergey Utkin, when summing up the press-conference, described the situation as illegal. According to him, any citizen – even if he or she is summoned for questioning as a witness – has the right to counsel.

– If they were taken by force, then, of course, it is illegal. Usually, first a person is given a writ and only afterwards voluntarily comes to the NSC – explained Sergey Utkin. – Reconduction (bringing with force) can be executed only at the appropriate decision, after this person failed to appear voluntarily after being summoned by the investigator. Any person, even as a witness is entitled to have his attorney. A witness has the right to refuse to testify if there is no lawyer (his right to counsel is violated). And the law is on his side. Let me repeat: nobody had the right to take them anywhere forcibly! This is done only by police officers on a special decision of the investigator on reconduction. Also, the witness must know the reason for which he is being questioned, and this is why everything should be explained to him before the interrogation – what criminal case he is questioned about, with reference to what persons, etc.

As for now, the editorial staff of the “Voice of the Republic” only knows that the case on which they employees of the publication were questioned, for some reason is connected with terrorism, and it is not informational terrorism (!). Apparently, special services could find nothing more against the editors!