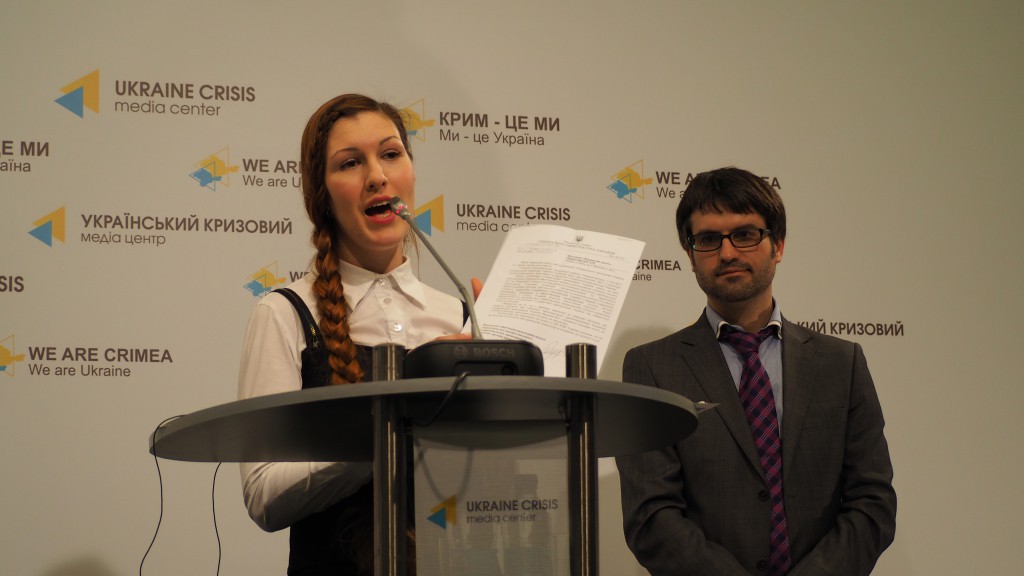 Press Briefing: When will Yarema be punished?

Participants of the press briefing presented a detailed report regarding the inactivity of the General Prosecutor’s Office and cited grounds for bringing the former General Prosecutor to liability. The briefing was held in the Ukrainian Crisis Media Centre (UCMC) on 19 March, 2015 at 11:30 a.m.

“A year has passed since the day of victory of Maidan, and the General Prosecutor’s Office has not given an account of the disastrous year of 2014. The GPU sabotaged lustration in its ranks and was not able to prosecute Yanukovych’s cohorts. Proceedings against the suspects in the massacre at the Independence Square resemble a farce. We have lost means,  siphoned off by Yanukovych and his team and failed to seize illegal businesses of the former ‘Party of Regions’ members, which are located on the territory of Ukraine. In some areas, the Ukrainian prosecutor’s office cooperates with dictatorships, helping to prosecute political opponents. For example, they have been involved in a politically motivated case against Mukhtar Ablyazov, for whom Ukraine along with Kazakhstan and Russia filed extradition requests” – stated Anastasia Chernogorskaya, a human rights activist from the Open Dialog Foundation.

MP Igor Guz highlighted the need to hold Vitaliy Yarema accountable for his inaction during his tenure as General Prosecutor. According to the MP, Mr. Yarema had every opportunity to administer justice, but failed to do so. In addition, he has not justified the confidence placed in him and has not brought about positive outcomes; on the contrary, he has even caused damage, as many perpetrators have already managed to flee abroad. No repetitions of such inaction and impunity should be observed in Ukraine following Maidan.

Roman Maselko, a lawyer of AutoMaidan added: “If hadn’t been for the constant attention of activists and regular exertion of public pressure, the majority of cases related to AutoMaidan would have quietly ‘died’ in the cabinets of the prosecutor’s office. The No. 1 demand of Maidan was  punishment of those responsible, and Mr. Yarema, who came to the prosecutor’s office from the barricades, actually helped criminals escape punishment. Both the Berkut worker who had killed activists, and Mr. Yarema, who did not ensure that a proper investigation was conducted, were confident that they could escape punishment. Therefore, only the implementation of the principle of inevitability of punishment will change the situation in the country, and the General Prosecutor should be the first one subjected to its operation”.

The full text of the report: Vitaliy Yarema’s ‘achievements’. Results of the activities of the Ukrainian Prosecutor’s Office – one year after the EuroMaidan is accessible via the following link: en.odfoundation.eu

Should any questions arise, please contact us by phoning or writing at: +380639957557, [email protected]
Press Secretary Viktoria Zhuhan