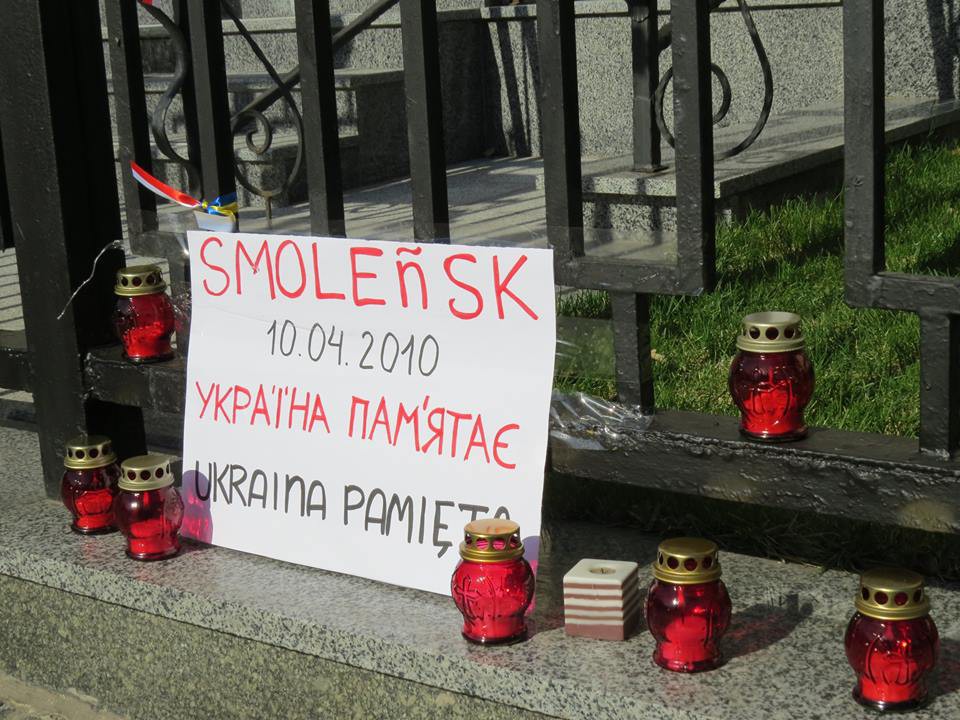 In Kiev, people pay tribute to the victims of the Smolensk tragedy

The Open Dialog Foundation and activists from different social organisations have visited the Polish Embassy in Ukraine today in order to light candles and lay flowers in solidarity with the Polish people who suffered from the tragedy five years ago.

Upon invitation from the Open Dialog Foundation, representatives of other organisations, including the Belarusian Solidarity Movement ‘Razam!’, Ukrainian Students’ Union and others gathered near the Embassy. Flowers, candles and ribbons had already been placed there by other emphatic Ukrainians.

– As a Polish person living in Kiev, I would like to thank those Ukrainians who have come today to the Polish Embassy. Thanks to my co-workers and others – Agnieszka Piasecka, an expert of the Open Dialog Foundation in Kiev, stated. – Today is the fifth anniversary of the disaster, unprecedented in the history of modern Europe. 96 people were killed: 88 passengers and 8 crew members. But it was not a regular flight; it was a special flight, carrying dignitaries of the Polish state, headed by the president and his wife. There were representatives of almost all political forces in Poland, who in those days, were united by the notion of honouring the memory of the Katyn tragedy. After 5 years, unanswered questions and doubts still preoccupy many. All the more so, I am grateful for the symbolic gestures of laying flowers and lighting candles. A few candles – it is so little, but at the same time – a lot.

Benyamin Babadzhanyan, acting Chairman of the Ukrainian Student Union, who took part in the event, commented as follows:

– A man’s life is the highest social value, and so we have to remember about events that cause the death of people. Given the characteristics of our historical ties and the fact that Poland is our strategic partner, and even regardless of this, a tragedy of this magnitude should teach us to prevent such tragedies from happening in the future.

Should you have any questions, please call us: +380639957557 [email protected]
Press Secretary Viktoriia Zhuhan