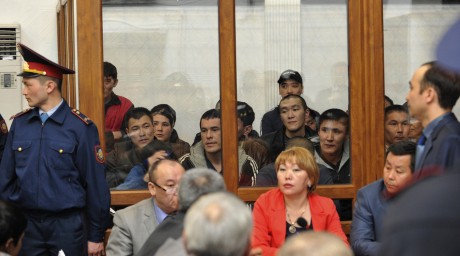 Zhanaozen: an injured policeman refused to claim the defendants 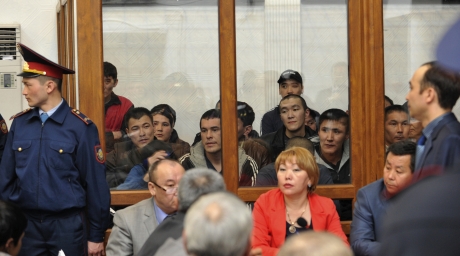 During the hearing related to the tragic events in Zhanaozen on the 16th of December, 2011, an injured policeman abandoned his claim against the defendants.

According to the policeman, he was sent to the central square of Zhanaozen on the 16th of December, 2011 to ensure law and order. According to his testimony, he was standing near the stage, and when the riots broke out, he got wounded – was hit in the head, which resulted in a lesion of his right eye. During the attack he did not see the assailant, but he claims that he abandoned the claim against the accused of his own will, and he requests that his name be excluded from the list of injured persons. When asked by the lawyers if he recognised any of the defendants, the policeman said he didn’t. A police officer also said that he and his colleagues went to the square without any weapons.

Based on the fact that Article 321 of the Criminal Code of the Republic of Kazakhstan is included in the criminal cases of 20 out of 37 accused persons, (“use of violence against a public officer”), the refusal of the aggrieved police officer to file claims against the defendants is yet further proof that the case is political and its purpose is to suppress the opposition in the country.

On the 28th of March, 2012, 38 out of 188 entrepreneurs, involved in the case as victims, completely abandoned their financial claims against the defendants. At trial, evidence was given that all the owners of yurts were given a warrant from the former akim (mayor) of Zhanaozen Orak Sarbopeev. The warrant stated that in case of damage to their yurts they will receive a compensation of two million tenge (approx.10,125 Euro).

On the 30th of March, 2012, Anuarbek Tadzhenov, a defendant in the case of Zhanaozen was transferred to house arrest because of his sick leg. According to his lawyer, Tadzhenov was wounded in his right foot. After treatment of the inner part of his foot, the problem is still not fixed and his foot is rotting.

Hearings in the case of the riots in Zhanaozen began on the 27th of March, 2012 in Aktau, the administrative center of the Mangistau Province. 37 persons are sitting on the defendant’s bench. Procedures of the court are chaired by judge Aralbay Nagashybaev, the prosecution is represented by six prosecutors and the interests of the defendants are being protected by 13 lawyers.