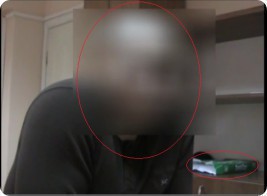 NSC is fabricating cases on terrorism

2 April 2012 | Editorial office
A wave of pressure on opposition politicians and independent journalists in Kazakhstan is rasing with a new strength. A few days after the General Prosecutor’s Office announced that a criminal investigation was initiated in connection with the preparation of terrorist acts in Almaty. On the 3rd of April, 2012, video material appeared online, in the film an unknown person with a hidden face is telling the details of their organisation. According to the anonymous person, the attacks were planned according to the instructions of the activists close to the Kazakh opposition (Mukhtar Ablyazov, his bodyguard Alexander Pavlov, Muratbek Ketebaev).

As reported by Kazakh Internet resources, the person was arrested and agreed to cooperate with the investigators, which means that it is likely that the testimony given by him will be further used in criminal cases against opposition members who are already in custody (in particular, Vladimir Kozlov), and the persecution of M. Ablyazov, A. Pavlov and M. Ketebaev who stay outside the country.

We have tried to analyse how consistent the version of the story from the anonymous internet person is with the earlier statements of the General Prosecutor’s Office of Kazakhstan. Special attention should also be given to the format of the given testimony and the “leak” of information to the Internet…

Inconsistencies with the statements of the General Prosecutor’s Office

In a press release of the General Prosecutor’s Office it was stated that “for the organisation of terrorist acts Pavlov allocated funds in the amount of 25,000 U.S. dollars, of which the performer was given 15 thousand dollars”.

The text from the screenshot:

For the organisation of terrorist attacks Pavlov allocated funds in the amount of 25,000 U.S. dollars, out of which the accomplisher was given 15 thousand dollars. The remaining 10,000 were agreed to be paid after the terrorist attacks.

According to the detainee, for each explosion they were to receive 50,000 U.S. dollars. Why are there such great discrepancies?

The General Prosecutor’s Office also reported that terrorists were planning to organise a bombing in the ‘Femeli’ Park behind the ‘Sary Arka’ theater in the Auezovskiy District and lay explosive devices at pedestrian crossings along Al-Farabi Avenue. The detainee does not clearly name the place where the explosions were to occur, but simply says that it was going to happen in the air or in a deserted place. Doesn’t the accomplisher of terrorist attacks know exactly where they were supposed to happen? Or perhaps, the testimony is merely a reaction to the previously published information about the places where the attacks were planned?

The text from the screenshot:

It was established that in early March 2012, they instructed their accomplices to carry out a series of explosions in public places, including the park areas and office buildings around the city of Almaty on the 24th of March.

In particular, Pavlov personally gave instructions to the accomplisher to organise an explosion in the ‘Femeli’ Park behind the ‘Sary Arka’ theater in the Auezovskiy District and to lay explosive devices at pedestrian crossings along Al-Farabi Avenue.

It is worth noting that the day before the controversial movie appeared, an article of our Foundation, entitled “Kazakhstan: how to pass test on democracy?” was distributed. In the article we quoted the words of Kazakh people that the area specified in the press release is virtually deserted. The screenshot of the website of the Open Dialog Foundation:

This material was quickly translated into a few languages and published both on our website and distributed to media representatives, NGOs and specialised institutions of the European Union.

How did a video that violates the secrecy of the investigation, get on the Internet?

Also, the fact that the video was so quickly placed on YouTube raises some questions. Isn’t it a part of a secret investigation? Only law enforcement officers who had access to the recording equipment and, most importantly, to the detainee himself, could have placed it on the internet. Interestingly, the very user Marisharova, from whose profile the video was published, uses his channel on YouTube. What is more, it is entertaining videos, and not politics, that constitute the basic content of this channel.

Below is a screenshot of the section from the video of the specified user from youtube.com: 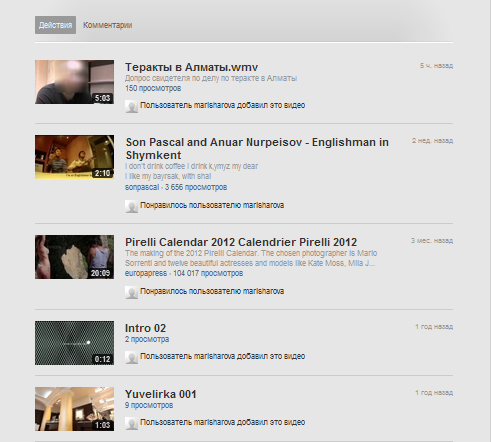 From what is ‘the suspect’ reading in the place of interrogations of ‘terrorists’?

During a more detailed view of the movie, one should pay attention to the place where the video was recording and the position of the ‘suspect’s’ head. Throughout the recording, he is bowing his head as if he is reading from a sheet of paper. However, office paper  carelessly thrown on a shelf makes the atmosphere of the place of recording more like a civic building, not a place of interrogation for people accused of terrorism.

A ‘professional’, who worked part time as a courier 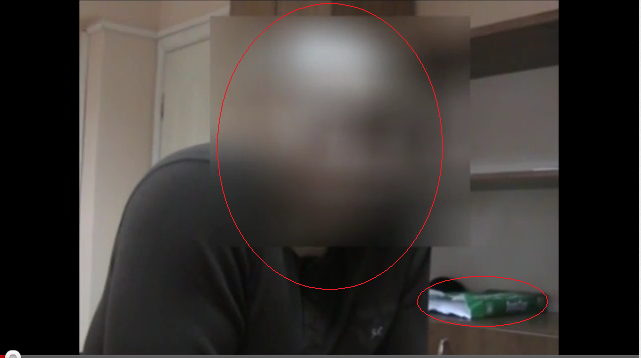 Special attention should be devoted to the evidence of professional activity of the ‘would be terrorist’. The detainee stated that he has been working for A. Pavlov for a long time, and that before he had worked, carrying bundles of documents, and fairly large amounts of money (several hundred thousand dollars), which he received at the Kazakh-Kyrgyz border. For each operation he received from 200 to 400 U.S. dollars. Isn’t it too much of a risk to entrust large amounts of money to a person working for so little? And how did it turn out that the execution of such an important matter was entrusted to a low-paid courier, in fact, a smuggler?

Is discussing the terrorist attacks over the telephone and having a direct contact with customers an observation of conspiracy?

In the recorded video, the suspect said that he was offered the job of organising the bombings in Almaty “in one of the phone conversations”. Are such arrangements settled on the phone, which is very often “Tapped” by the secret service? In addition, it leads too perfectly to the organisers of the terrorist attacks (Ablyazov, Dzhakishev and Ketebaev), each of whom had contact with the performer of the planned attacks.

Aren’t there too many questions arising in connection with the resonant detention and the consent of one of the performers to cooperate with the NSC (as a result, he is not involved in the case as a person accused of the preparation of terrorist acts, but as a witness, which automatically takes away any responsibility for the planned terrorist acts)? It all comes down to a not very professional staging of the whole matter by secret services of Kazakhstan, which are in a hurry to move on with the case on the organisation of terrorist attacks in Almaty by the leaders of the opposition movement of Kazakhstan.

The published video is a staged, unsuccessful attempt to discredit opposition figures in the eyes of the public and an attempt to reclassify the criminal cases of detained opposition activists by presenting more severe charges. However, reasons for the actions taken by the Kazakh authorities are clear. The case on the tragedy in Zhanaozen is falling apart: during the court session on the 28th of March, 2012,  38 of the 188 employers included in the case as victims, completely abandoned their financial claims against the defendants. At trial, evidence was given that all the owners of yurts were given a warrant from the former akim (mayor) of Zhanaozen Orak Sarbopeev. The warrant stated that in case of damage to their yurts they will receive a compensation of two million tenge (approx.10,125 Euro). At the meeting on the 4th of April, 2012, a police officer claimed that he abandoned the claim against the accused of his own will, and he requests that his name be excluded from the list of injured persons.

Based on the fact that Article 321 of the Criminal Code of the Republic of Kazakhstan is included in the criminal cases of 20 out of 37 accused persons, (“use of violence against a public officer”), the refusal of the aggrieved police officer to file claims against the defendants is yet further proof that the case is political and its purpose is to suppress the opposition in the country.

Thus, having suffered a failure in eliminating the leaders of the opposition in Kazakhstan by accusing them of inciting “social discord”, observing the collapse of the legal part of the case on the tragedy in Zhanaozen, Kazakh security services are preparing the next charge. We can only guess who masterminds all this.