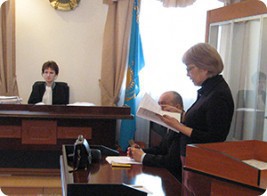 Lest we forget that in October 2011, by the decision of the court, the activity of the Communist Party of Kazakhstan was suspended for a period of 6 months. In accordance with the law of Kazakhstan, this entails a ban on the use of all mass media, campaigning and promotion. It is the violation of this paragraph that the leader of the Kostanay communists, Lyudmila Gorbenko is accused of, as after the suspension of the activity of the CPK two more issues of the ‘Iskra’ newspaper were published. The ‘Iskra’ is a newspaper published by the Kostonay branch of the Communist Party of Kazakhstan.

Lyudmila Gorbenko disagrees with the allegations, as in issues number 1 and number 2 of the ‘Iskra’ newspaper, which served as bases for the process, there was no material written by the CPK, and there were only reprints of articles from other newspapers in them.

The court found the arguments of the prosecutor persuasive, and decided to suspend the activity of the branch of the Communist Party of Kazakhstan in Kostanai. The First Secretary of the Regional Committee of the Party, Lyudmila Gorbenko, received a fine in the amount of five MCI (€ 41) for the promotional activity.

We should remind ourselves that this is not the first action of the Kazakh authorities aimed at restricting the legal existence of opposition political forces in the country. Until now, the party ‘Alga’ (‘Forward’) has remained unregistered. The party is calling itself the ideological successor to the opposition People’s Party, “Democratic Choice of Kazakhstan” (PP DCK);  but since 2006, it has been denied registration by the Ministry of Justice. By inhibiting the activity of some political forces, the Kazakh authorities violate the obligations undertaken in Madrid in November 2007. Then, during in the OSCE ministerial meeting, Marat Tazhin promised: “Kazakhstan will also take measures to liberalise registration requirements for political parties by the end of 2008.” Since that time, it hasn’t become any easier to register a political party in the Ministry of Justice. What is more, control of the opposition political forces became even stricter.