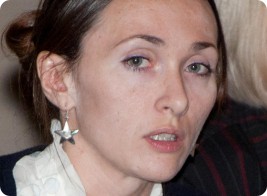 Irina Mednikova, journalist of the “Golos Respubliki” newspaper; born  on the 20th of August, 1982. Education:in 2006 she graduated from the Kazakh Al-Fabari National University with specialisation in philology. Apart from the journalist activity, Irina is a head of the Social Foundation ‘Youth Information Service of Kazakhstan”, specialising in advocacy campaigns, human rights and social conditions of the life of students, as well as in development and support of student self-government programmes. For example, she led the following programmes: in the years 2000 and 2001 – ‘StudentTY for a new contract’, in 2002 – a campaign to halt the proposed law ‘On National Youth Policy’. Since 2002, she was the organiser of seminars and training campaigns, including the 2003 ‘Advocacy: Participation of Citizens in Decision-making’. In 2004 she took part in the programme ‘Improvement of the bodies of student self-government’; while in the years 2005 to 2011 – in the draft of the proposed law, ‘Employment of students’ and the Kazakh Scholarship Programme.