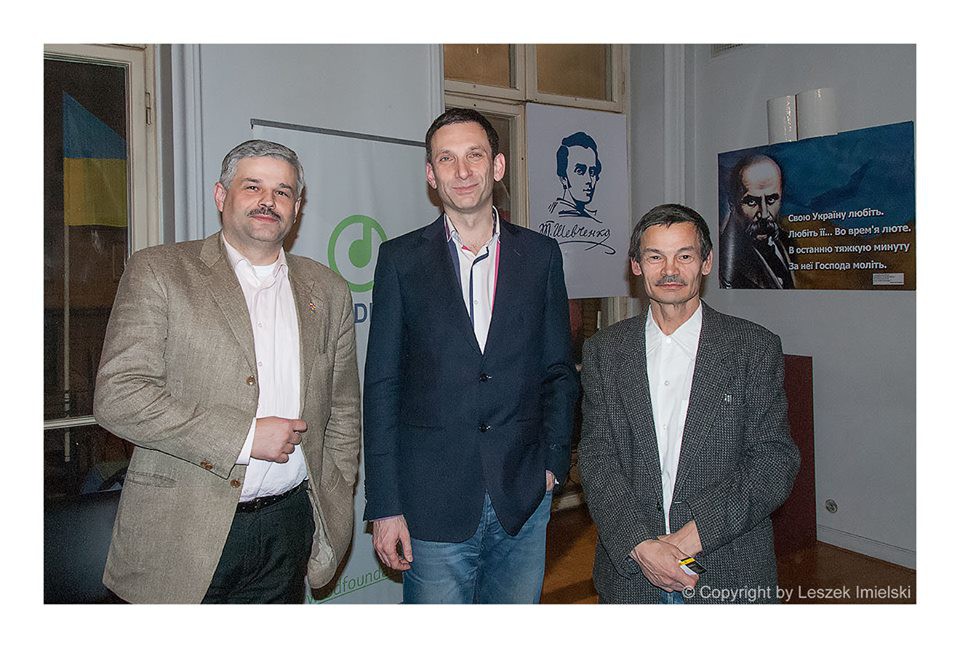 The ‘Ukrainian World’ centre held a meeting with the famous Ukrainian journalist and publicist, Vitaliy Portnikov, during which he spoke about the inevitable defeat of Russia and the consolidation of the Ukrainian people.

According to Portnikov, Maidan and the Russian aggression accelerated two opposing processes which will eventually result in a Ukrainian victory and a Russian defeat. Ukraine’s victory will bring about its transformation into a normal European country, a member of NATO and the EU: a state without oligarchic systems traversing politics and business. The defeat of Russia, in turn, will result in  the disintegration of the country. In the face of this, even mistakes of the Ukrainian governments are of no great importance. In his opinion, it will be achieved through the consolidation of the Ukrainian society, as for the first time, Ukraine has become a political nation. It means that citizens have adopted a conscious and voluntary identification of Ukraine, at the same time ignoring ethnic and cultural differences. Also, they have acquired a sense of civic responsibility for the state. Ukraine is no longer only comprises territories and areas in which people historically spoke Ukrainian. Today, Ukraine is, of course, Lviv, then Kiev, but it is also Kharkov, and Dnipropetrovsk, and Odessa. And also – as no one could have  expected before – Mariupol. It is perhaps the most ‘Ukrainian’ city in the country today. Although traditionally a stronghold of Ukrainian identity in the east of the country was the village; industrial centres have been predominantly inhabited by new Russian-speaking immigrants.

Maidan consolidated the Ukrainian element and prompted numerous people to feel Ukrainian genuinely and sincerely for the first time. Those who endured the hour on trial at Maidan – Portnikov assured.

The current war will lead to changes in the structure of the population of a similar nature to those caused in Poland by the results of World War II. Many of those who do not feel Ukrainian leave for Russia. But patriotic forces remain and are mobilising for action. People who have Ukraine in their hearts as in the Polish poem by Wyspiański – “and this is what Poland is”.

Putin wants to turn back history, but in this game, he is doomed to fail. He wants to conquer all – not just the Crimea and Donbas (their possession has no rational justification and will be an economic disaster), but all of Ukraine and complete the restoration of the Russian empire.

Ukraine happily jumped at the last moment from the sinking Titanic, which is Russia and the project of the ‘Russian world’. The conflict will result in the internal disintegration of the Russian Federation. Nations and ethnic groups, living in different regions of Russia: the Caucasus, Tatarstan, Siberia – will claim independence. Even today, they wish to use the opportunity of a weak Russia. At the individual level, people will begin to question the ‘Ruthenian’ identity. Support for Putin is shaky. When the Russian economy finally collapses under the weight of sanctions and people stop receiving their pensions , his government will end – Portnikov summed up.