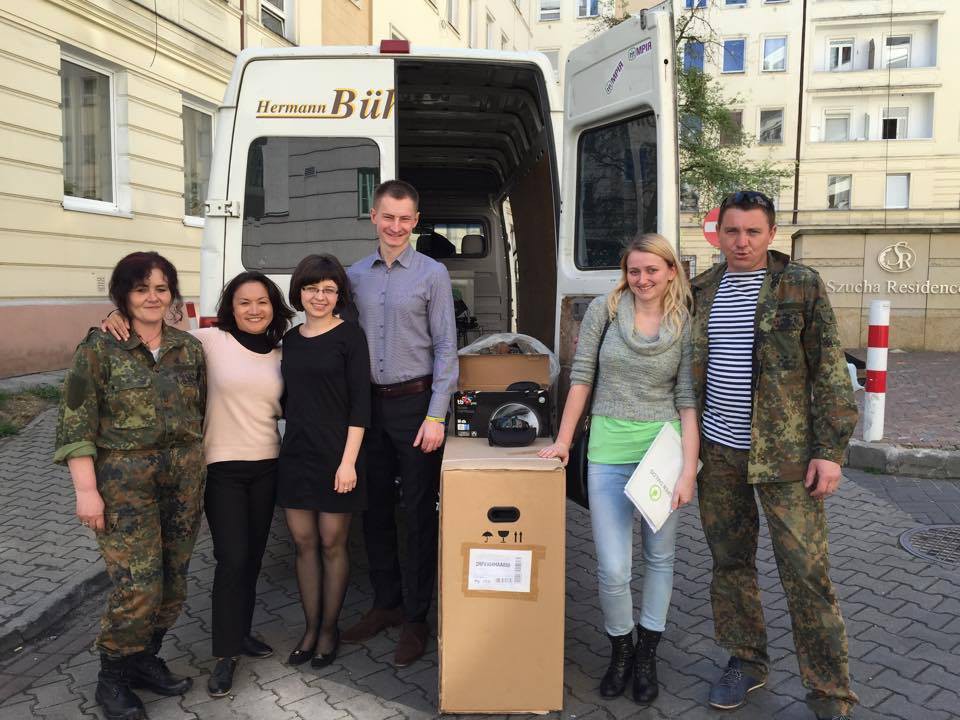 Assistance for soldiers and civilians from the ODF: ‘Fair Ukraine’ visited ‘Ukrainian World’ and the Foundation’s office

Lyubov Soltys, the president of the ‘Fair Ukraine’ foundation from Terebovlia, along with two activists from the organisation, visited the ODF’s office and the ‘Ukrainian World’ centre on 27 April. Everyone benefited from the visit – Ukrainians received a compressor and equipment for soldiers from the Open Dialog Foundation, and the ODF was able to transfer humanitarian aid to the ATO zone.

The Open Dialog Foundation has cooperated with ‘Fair Ukraine’ (Ukr. ‘Чесна Україна’) for almost two months. Representatives of the Ukrainian organisation regularly visit soldiers and volunteers in the ATO zone, providing them with necessary assistance. It is due to their activity that the items purchased by ODF, namely: a 9-bar compressor (necessary for increasing the the pressure in the tyres of military vehicles), a set of oils for the pneumatic system, sets of Bundeswehr-type uniforms, ballistic goggles and tactical gloves, reached the East of Ukraine.

In addition to the ODF office, the activists also visited ‘Ukrainian World’ during their visit. In gratitude, they treated the staff and volunteers with two fancy cakes, decorated with Ukrainian symbols. They also relayed to us the fact that they deliver the very same cakes, handmade by ‘Fair Ukraine’ activists, to the ATO zone.

The last leg of the visit of the Terebovlia organisation concerned transferring humanitarian aid for civilians in the Donetsk and Lugansk provinces. As many as 81 bags and cartons of clothing, footwear, items for personal hygiene, food, household chemicals, toys and household goods will be transported to refugees in Starobilsk. Additionally, medical supplies, bandages, medical equipment (including inhalers, a hoist for disabled persons, a walker and a wheelchair) will be transported to the hospital in Artemovsk, where wounded soldiers are fighting for their lives. So far, the aid has already reached the Ternopil province, where, on the second weekend of May, it will become part of a larger convoy and be transferred to the east. Shortly, we will publish a report on aid shipments dispatched to refugees in Starobilsk.