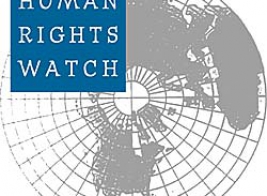 Many of the 37 defendants, including one who is under 18, have testified that they were subjected to physical and psychological abuse by police and investigators, including beatings, suffocation, and threats of rape or harm to family members, the Zhanaozen 2011 Committee, civil society activists monitoring the trial, told Human Rights Watch. The alleged widespread and serious ill-treatment of the defendants undermines the ability to guarantee them a fair trial, which should lead a court to halt proceedings, Human Rights Watch said.

“The defendants have made grave allegations during the trial of ill-treatment and torture that mar the integrity of these legal proceedings,” said Mihra Rittmann, Central Asia researcher at Human Rights Watch. “Torture is a serious crime. The defendants’ allegations need to be investigated and anyone responsible brought to account.”

The charges against the defendants stem from violent clashes between civilians, including striking oil workers, and police on December 16, 2011, at the site of an extended oil workers’ strike in Zhanaozen, a town at the heart of Kazakhstan’s oil industry. The charges could result in prison terms of up to 10 years for organizing unrest and 8 for participating.

The trial began on March 27, 2012. Over the course of the trial, defendants have given detailed accounts of alleged beatings and other ill-treatment and torture in custody by police officers and investigators, agents of Kazakhstan’s National Security Committee (KNB), and in at least one case, an officer at the prosecutor’s office in Zhanaozen. They testified that the mistreatment was to coerce statements against themselves or others.

The presiding judge told the court he was sending allegations of ill-treatment to the prosecutor’s office in Zhanaozen for review and requesting a response within 10 days. But for the defendants’ torture claims to be investigated in a manner capable of bringing those responsible to account, as required under international human rights law, proceedings should be suspended pending an impartial and thorough review by an independent body, Human Rights Watch said.

“It is absurd to think that the same prosecutor’s office involved in the investigation in which some of the abuse is alleged to have taken place is going to carry out an impartial review of the defendant’s claims,” Rittmann said. “Kazakhstan needs to show it has a zero-tolerance policy toward torture by suspending the trial and conducting an immediate, impartial, and effective investigation.”

On April 10, Esengeldy Abdrakhmanov, one of the defendants, told the court he contracted tuberculosis after he was detained and mistreated, said Max Bokaev, a member of the Zhanaozen 2011 committee who monitored the trial that day. Abdrakhmanov told the court that he was stripped naked, made to lie on the cold floor of the police station, and doused with cold water. He said that he and other detainees were beaten simply for raising their heads and that a police officer jumped on his back.

On April 11, Tanatar Kaliev, an oil worker charged with organizing mass riots, testified that he was ill-treated during the investigation. Media reports quoted him as testifying: “I feel ill right now because – since I was grabbed on December 18 and beaten ruthlessly during questioning – my health deteriorated. Interrogations were conducted under major physical, psychological pressure, they beat my head with a stool, threatened there would be problems for my older son.”

He also told the court that after he was detained: “I literally stood there in blood – the whole floor was covered in blood. Questioning took place for days, they didn’t let me sleep. I didn’t have a lawyer. They tricked me saying if I say everything they tell me, they’ll let me go home and nothing will happen to my family.”

Other defendants also testified that they had been beaten or tortured and said that statements they made during the investigation had been coerced. Maksat Dosmagambetov, an oil worker, said his kidneys were badly beaten and he suffered broken ribs. He named several of the officers who beat him, trial monitors reported. At least five of the defendants – Shabdol Utkilov, Rosa Tuletaeva, Zhanat Murynbaev, Kairat Edilov, and Mels Sarybaev – told the court that during the investigation, officers or investigators attempted to coerce testimony from them by suffocating them using plastic bags.

Tuletaeva, an outspoken oil worker charged with organizing mass unrest, told the court that she was repeatedly suffocated with a plastic bag during the investigation: “I started to suffocate … I wanted to take a breath, but everything started to spin and I lost consciousness. They put that bag over my head over and over again ….” She told the court that the officers said to her: “You’ll do everything that we say … you’ll take responsibility for it all.”

Galym Ageleuov, a civil society activist and member of the Zhanaozen 2011 Committee who monitored proceedings on April 17, reported that Parakhat Dyusenbaev testified that he was threatened with rape and humiliated sexually.

Dyusenbaev told the court: “They summoned me to the GOVD [police station], to Colonel Kadyrov. He screamed and threatened to hang charges of arson on me. He beat my head against the wall. My hands were tied behind me. They took off my trousers and said that he’ll force a bottle in me. He started to beat me in the behind, in the groin, on my sides. I started crying and told him that my father died, my sister is wounded, and asked him to stop doing this. Even after I came out of the hospital, for a long time, I couldn’t walk.” Zhanaozen 2011 reported that at least two others also testified they had been threatened with rape.

Nursultan Mukhashev, who is 17 years old, told the court on April 19 that he was questioned without his mother present, and that the investigator hit him as he was being questioned, Boyaev of Zhanaozen 2011 reported.

“It is unconscionable that these defendants were tortured to coerce testimony that is being used against them in trial,” Rittmann said. “Any court that would allow into evidence statements that were coerced from defendants through torture and ill-treatment is violating the most basic tenets of a fair trial and undermining the absolute prohibition on torture.”

As a party to the United Nations Convention against Torture, Kazakhstan is obligated to carry out a prompt and impartial investigation into all credible allegations of torture. Under Kazakhstan’s Criminal Code, police and investigators may be prosecuted for torture and sentenced to up to 5 years in prison, but prosecutions are rare.

Respect for the right to a fair trial and due process, as guaranteed under international human rights law, requires not only fairness in the courtroom, but the absence of abuse of process throughout the proceedings. In a situation in which there are allegations of egregious violations of the defendants’ rights before they are brought to trial – such as ill treatment and torture – there can be no guarantee of a fair trial.

Given the serious and multiple allegations of ill-treatment and torture before the trial, the court should uphold the rule of law by dismissing the confessions obtained under torture and ordering an immediate and full investigation. It should also suspend the trial to make clear that it does not tolerate widespread due process violations, Human Rights Watch said.

Human Rights Watch has documented other allegations of physical abuse by police in the context of the authorities’ investigation into the December 16 violence. Several people detained in the immediate aftermath of the violence and later released told Human Rights Watch that they were subjected to or witnessed physical abuse by police when they were in custody in Zhanaozen between December 16 and 19.

They told Human Rights Watch researchers that police kicked and beat them with truncheons, stripped them naked and walked on them, and subjected them to freezing temperatures. Human Rights Watch also documented the death of Bazarbai Kenzhebaev, 50, who was detained by police on December 16, held in custody until December 18, and who died on December 22 from injuries apparently sustained in custody.

The allegations of torture and abuse by the defendants on trial are also consistent with past reports of such practices in Kazakhstan. In December 2009, for example, the UN special rapporteur on torture concluded after a visit to Kazakhstan that “evidence obtained through torture (including threats) or ill-treatment is commonly used as a basis for conviction.” The report said the UN received “many credible allegations of beatings with hands and fists, plastic bottles filled with sand and police truncheons, and of kicking, asphyxiation through plastic bags and gas masks used to obtain confessions from suspects.”

“When so many defendants have provided detailed and compelling testimony that their confessions were coerced under duress, meaning that key fundamental rights have been so severely violated, this court cannot credibly provide them a fair hearing,” Rittman said. “Under the circumstances, these legal proceedings should not continue.”