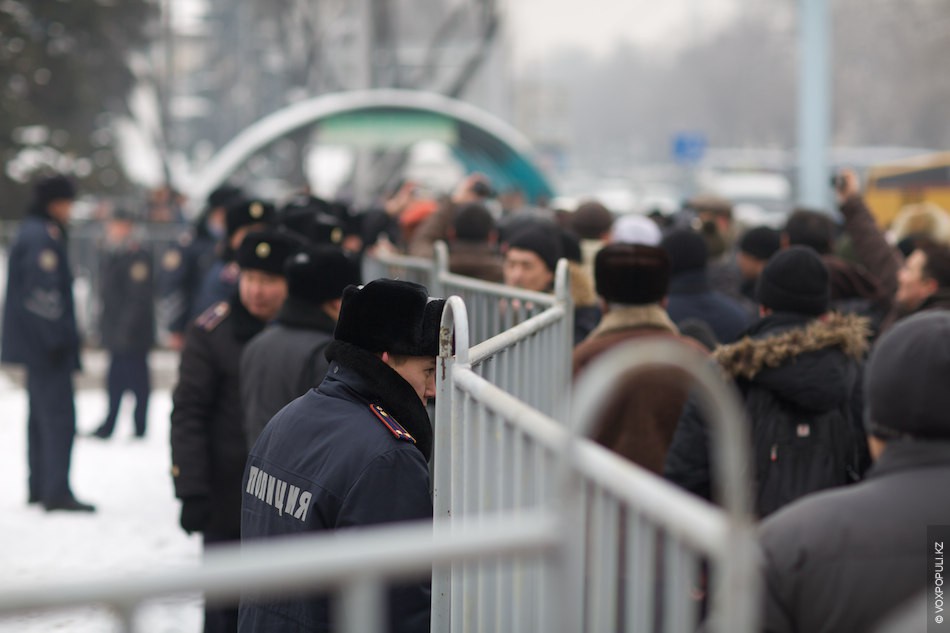 Report: The harassment of civil society in Kazakhstan

26 June 2015 |
Table of contents:
1. Introduction2. Legislative measures3. Particularities of political and public environment4. The freedom of flow of information5. Long-term support and resources6. The space for dialogue and collaboration7. Recommendations for the creation of a favourable environment for civil society in post-soviet countries with low levels of democracy.

The Open Dialog Foundation welcomes the initiative of the UN High Commissioner for Human Rights on consultations regarding the creation of a favourable space for civil society activities and the development of a report with practical recommendations on this matter.

Since 2009, the Open Dialog Foundation has been dedicated to the protection of human rights in the area of the former Soviet Union, paying particular attention to the region’s largest countries: Kazakhstan, Russia and Ukraine.

The strike of oil workers of Zhanaozen and protests on Bolotnaya Square were suppressed by force. Since then, for fear of new protest movements, Kazakhstan and Russia have increased oppression against members of civil society who continue to live in fear.

We highly appreciate the opportunity to share our experience gained during our communication with representatives of civil society in Kazakhstan. After each section, the report provides specific recommendations for Kazakhstan on the protection of civil society. The analysis has been carried out according to areas determined by the United Nations, namely: legislative framework; political and social environment; freedom of dissemination of information; long-term support and resources; space for dialogue and cooperation.

At the end of the report, general recommendations for the development of civil society in post-Soviet countries with low levels of democracy can be found.

In the years 2012 and 2013, the Open Dialog Foundation organised several observation missions on human rights in Kazakhstan. It also reported on the court trials of Vladimir Kozlov and the Zhanaozen oil workers as well as the closure of independent media outlets.

We hereby request that the United Nations High Commissioner for Human Rights consider these recommendations, and we stress the importance of this initiative, given the critical narrowing of space for the development of civil society in post-Soviet non-democratic states.

Over the past 5 years, the largest post-Soviet countries – Kazakhstan, Russia and Ukraine – have undergone major social upheavals associated with the struggles of civil society against political regimes. The strike of oil workers of Zhanaozen and protests on Bolotnaya Square were suppressed by force. Since then, for fear of new protest movements, Kazakhstan and Russia have increased oppression against members of civil society who continue to live in fear. Pressure from the international community did not suffice to prevent this. Even in Ukraine, civil society only began to benefit from true international support after February 2014, when special police officers opened fire on protesters in the centre of Kiev.

The lack of space for the free and safe operation of civil society leads to the preservation of authoritarian regimes, and these countries cease to be reliable and predictable partners.

The international community should heed civil society in non-democratic countries, especially in times of social upheavals and armed conflicts. The UN, EU, OSCE, PACE, and the governments and parliaments of democratic states should support the human rights NGOs whose members often risk their lives defending the values ​​of human rights and democracy. Constant communication with civil society will contribute to the transfer of unbiased information to diplomats and politicians about situations in non-democratic countries, and will also allow proactivity, thus preventing violent conflicts.

Legislation of the Republic of Kazakhstan (RK) limits the space for the development of civil society and provides the possibility for the state authorities to overregulate this sphere. Some examples of such regulations are presented below:

Many scientific studies, as well as analyses of data by the ‘World Values ​​Survey’ organisation show that the public environment imposes limitations on the development of civil society in Kazakhstan.

3. Particularities of political and public environment

Many scientific studies, as well as analyses of data by the ‘World Values ​​Survey’ organisation show that the public environment imposes limitations on the development of civil society in Kazakhstan. For Kazakhs, private social networks and family ties are more common than civic life. They remain ‘enclosed’ in their social sphere and do not engage in political or public life. In society, there are features of a political culture, such as: patriarchy, political apathy, tolerance towards the authorities, low levels of knowledge as regards politics, etc. In this connection, great responsibility lies with the government, which is charged with ensuring that proper conditions exist for the development of civil society.

However, the political environment is not favourable for the development of civil society in Kazakhstan. Civil society activists are subjected to many restrictions, including arrest, criminal prosecution, bans on carrying out actions, etc.

Activists who are critical of the state authorities are subjected to prosecution on fabricated charges:

–   In 2012, the leader of the unregistered party ‘Alga!’, Vladimir Kozlov, was sentenced to 7.5 years in prison on political charges in connection with the events in Zhanaozen.–   Since 2012, human rights defender Vadim Kuramshin has been serving a 12-year sentence in a penal colony having been convicted of ‘extortion’.–   In 2007, dissident and poet Aron Atabek was sentenced to 18 years’ imprisonment in a penal colony having been convicted of ‘organising mass disorder’.–   Through abuse of the Interpol system, Kazakhstan pursues not only the opposition politician Mukhtar Ablyazov, who has long funded the independent media and the opposition movement in Kazakhstan, but also his relatives and associates. Human rights organisations, members of the European Parliament and PACE have repeatedly labelled Ablyazov’s case political and called on France not to extradite him.–   In ​​November 2014, Roza Tuletayeva, an activist of the oil worker’s movement, who, like other convicts in the Zhanaozen case, was subjected to brutal torture, was released from prison. Her liberation was made possible thanks to stark criticism by the European Parliament, the UN and the OSCE.–   Human rights activist and lawyer, Zinaida Mukhortova, was repeatedly subjected to forced psychiatric treatment. She was released in December 2014, following repeated appeals from the United Nations and human rights organisations.

Activists and organisers of the protests are often subjected to detentions, arrests and even fines for taking part in small or single-person pickets. In March, 2014, in Astana, the police violently pushed women and children who were protesting against forced evictions from apartments into a police bus. Also in 2014, police detained protesters at a rally against the establishment of the Eurasian Economic Union; activists of the ‘Antigeptil’ group; protesters at a rally against the devaluation of the tenge; protesting builders of the ‘EXPO-2015’ exhibition; bloggers Nurali Aytelenov, Rinat Kibrayev, Dmitriy Shhelokov, Dina Baydildayeva and others. In February 2015, police arrested two residents of Semey city, who were holding a protest action outside the US embassy.

4. The freedom of flow of information

In Kazakhstan, the authorities impede the development of independent media, thereby limiting the information channels, necessary for the activities of civil society.

With regard to this sphere in Kazakhstan, one can highlight the following features and problems:

The State does not allocate grants for projects in the spheres of human rights protection, political education, rule of law, reform of the government etc.

6. The space for dialogue and collaboration

The Kazakh regime is not interested in dialogue and reacts negatively to the independent activities of NGOs, which manifests itself in oppression or disregard for the stance of civil society.

–   In 2013, the embassies of Kazakhstan, in their statements to their European colleagues, accused opposition activists, politicians and the media of ‘inciting social discord’ and labelled the court judgements in respect of the Zhanaozen oil workers and Vladimir Kozlov ‘unbiased’. The EU and human rights activists have recognised these sentences to be politically motivateds.

The Kazakh regime is not interested in dialogue and reacts negatively to the independent activities of NGOs, which manifests itself in oppression or disregard for the stance of civil society.

–   Over the last few years, in violation of the law, Kazakhstan has applied lobbying mechanisms in order to extradite the opposition leader Mukhtar Ablyazov, his family members and close associates, who have been granted political asylum in the EU. With the use of fabricated data, Kazakhstan is also striving to deprive these people of refugee status. Law enforcement agencies of the Czech Republic, Spain, Italy, France and the United Kingdom were subjected to Kazakhstan’s undue influence, which triggered an international scandal.

–   In October 2014, Kazakhstan misinformed the United Nation’s states during the consideration of the Universal Periodic Review. Kazakhstan refuted comments on nonfulfillment of the recommendations regarding the observance of human rights and stated that the country’s legislation and the policy of the authorities fully comply with international obligations.

7. Recommendations for the creation of a favourable environment for civil society in post-soviet countries with low levels of democracy.